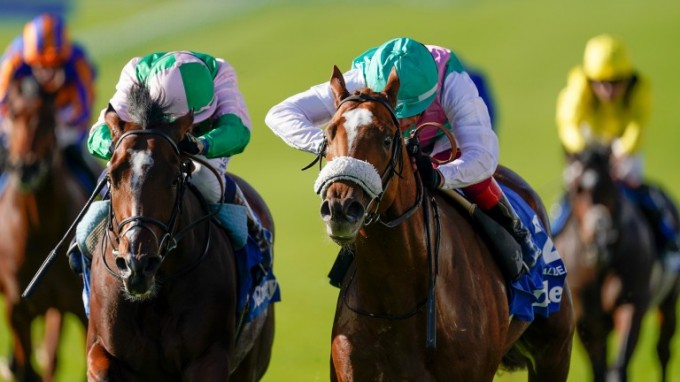 A phenomenal week for Frankel in the Newmarket sales ring was capped in style on the track as 12 years after the super sire won the Dewhurst, his chestnut son Chaldean repeated the feat under a battered and bruised Frankie Dettori.

Frankel, the jewel in the crown of bloodstock behemoth Juddmonte, was the highest-grossing stallion at Book 1 of the Tattersalls October Yearling Sale across town, with his 25 lots returning receipts totalling 18,745,000gns over the three days, including the 2,800,000gns top lot.

Chaldean was bred by Whitsbury Manor Stud and sold to Juddmonte for 550,000gns as a foal, but that is looking good business after wins in the Acomb Stakes, Champagne Stakes and now the Darley-backed Group 1 Dewhurst Stakes.

Having made the majority of the running, Chaldean showed a burst of speed his sire would have been proud of over two furlongs out, before holding on gamely to defeat runner-up Royal Scotsman by a head. For good measure Juddmonte also sent out Kingman colt Nostrum to finish third as they topped a phenomenal week on and off the track.

“He’s a special horse by a special stallion,” said Juddmonte racing manager Barry Mahon of the winner. “We’re very lucky to have Frankel and Kingman. They’re two phenomenal sires and testament to Prince Khalid’s breeding for over 30 years that he’s bred elite stallions like these two.

“Chaldean won’t have any problem staying a mile, and neither will Nostrum. He’ll be a better horse next year and we’ve got two lovely horses who will keep us dreaming through the winter.”

Reflecting on Frankel’s impact in the sales ring earlier in the week, Mahon added: “We’ve seen that every buyer of thoroughbreds around the world was keen to add a Frankel to their stable – that’s how well he’s done as a racehorse and a stallion.”

Dettori managed his customary flying dismount after the race, but he was clearly suffering having taken a heavy fall earlier in the day when his mount Liftoff clipped heels with a rival in the Zetland Stakes. 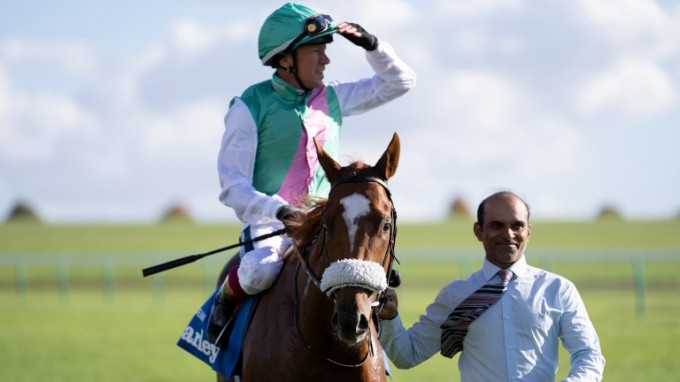 “I’m pretty shook up, I must say,” said Dettori. “I don’t envy the jump jockeys, but luckily I’m in one piece. I’ve got a couple of knocks and a bit of a headache but there’s nothing like a Group 1 to put you right, right?”

On the winner, he added: “When we shot clear I thought we had it in the bag, and I think Chaldean lost his concentration a bit as he was all on his own. I probably kicked a bit too early, but he’s tough and well-balanced.

“At the moment I’d say a mile is no problem. He’s neat and compact and handled the Dip well. He’s a proper Guineas horse, and they can dream now for next year.”

Having landed the 2,000 Guineas with Kameko in 2020, winning trainer Andrew Balding was delighted to have another genuine contender for the Newmarket Classic on his hands, and agreed with Dettori and Mahon that the mile would be no issue come the spring.

“The nice thing is he’s so relaxed,” said Balding. “He should go on next year and certainly stay a mile, so we’ve got lots to look forward to.

“He’s just a dream horse really. He doesn’t have to make it and the bigger the field, probably the better off he’ll be. He’s all speed on his dam’s side, so I’d be surprised if he gets further than a mile. We’ll see how he’s training in the spring, but I think I’d be comfortable going straight for the Guineas – I can’t be making that decision at the moment, though.”

His fourth victory of the year sent Chaldean towards the head of the betting for next season’s 2,000 Guineas, with Paddy Power offering 8-1 (from 12) for the Newmarket Classic over a mile, with Little Big Bear the 5-1 favourite.

This is the first season Balding has trained for Juddmonte, and he revealed that Chaldean was the first into his famous Kingsclere yard of the horses which were sent to him.

“It’s a huge privilege to train for them, particularly when you get sent horses like him by the stallions they have access to, it’s a dream,” said the trainer.

“It’s an amazing race to win and the most important two-year-old race of the year. My father [Ian] won it with Silly Season, Mill Reef and Dashing Blade, so I’ve got a bit of catching up to do!”

Runner-up Royal Scotsman put a disappointing run in the Gimcrack behind him to confirm the promise he had shown earlier in the season for Paul and Oliver Cole, pushing the winner all the way to the line to leave connections keen on a rematch in the Guineas.