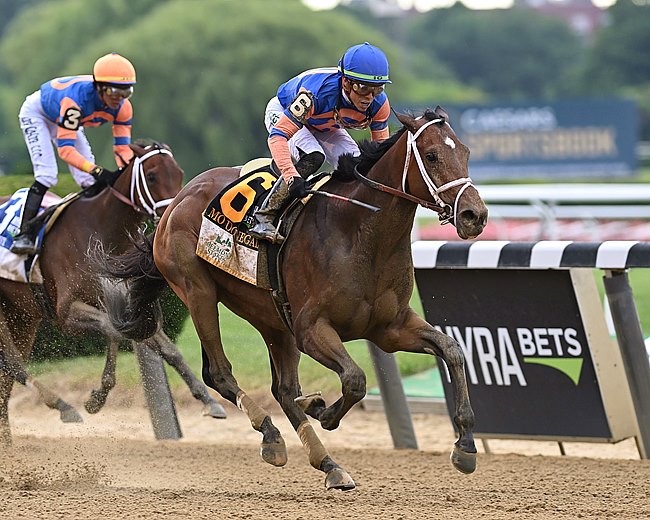 Mike Repole has consummated several business deals that have made him a billionaire.

Yet from one perspective none of them could match the agreement he reached with Jerry Crawford of Donegal Racing on April 29, a little more than a week before the Kentucky Derby Presented by Woodford Reserve (G1).

Information provided by Equibase at time of entry.

“In terms of the emotions it has produced, that deal with Jerry and Donegal was the best I’ve ever made,” Repole said.

Those emotions boiled over in a euphoric manner June 11 in the Belmont Stakes Presented by NYRA Bets (G1) when the 3-year-old at the center of the April 29 deal, Mo Donegal , earned back every penny of the money Repole spent to buy a 25% share of him when the son of Uncle Mo   charged to a three-length victory over the filly Nest  in the $1.5 million final leg of the Triple Crown and gave Repole an unforgettable 1-2 finish in the race he has dreamed of winning for decades.

“He’s a son of Uncle Mo,” Repole said, referencing the stallion who was a champion and grade 1 winner for Repole. “His name is Mo Donegal. This horse was meant to be. Jerry was very kind in the negotiations.”

In giving winning trainer Todd Pletcher his fourth Belmont Stakes victory and topping a 1-2 finish for the seven-time Eclipse Award trainer in the 1 1/2-mile classic, Mo Donegal was the magnet that brought a massive crowd to the winner’s circle from the camps of Repole and Donegal Racing.

Donegal accounted for about 200 of the 46,103 fans who turned out at Belmont Park Saturday, while Repole’s Repole Stable brought about 80 guests.

Yet for Repole, who grew up in Queens and still calls himself “Mike from Queens” even though he only spends 28 days a year in the Empire State, this was truly a home game. He won his first Triple Crown race and the biggest race of the year at a track he has frequented since he was a teenager and where he can find a friend or acquaintance every time he turns a corner.

If there was a scene that told the story of the moment it was seconds after the race when Repole tried to fight back tears of joy while his young daughter, Gioia, jumped for joy and climbed all over her father.

“I must have shook 200 hands today. There are so many people I run into here,” said Repole, who brokered the deal with Crawford, the CEO of Donegal, with a clause allowing him to have Mo Donegal sport his colors in the Belmont. “It’s surreal. It really is. I’ve been coming to the races at Aqueduct and Belmont for years and Saratoga when I could get a car.

“Winning with Todd, my family and his family are very close. To give him his fourth Belmont is really, really special, especially to win it with a son of Uncle Mo. Todd always said he was one of the most talented horses he’s ever had. To have this horse in my silks, named ‘Mo,’ by Uncle Mo, it’s pretty special.”

For Donegal, it was also a special moment. After 14 years it finally notched a Triple Crown win after three thirds in the Kentucky Derby and one in the Belmont.

“These are not people who can spend millions of dollars on horses, but we work really hard to find horses that might be something special down the road,” Crawford said about a group with 54 partners. “It’s been a feel-good story.”

It also was a huge achievement for Ashview Farm and Colts Neck Stables, which bred the 1-2 finishers, Mo Donegal and Nest.

A son of the Pulpit mare Callingmissbrown, Mo Donegal was purchased for $250,000 at the Keeneland September Yearling Sale. He is the second foal and second winner from his dam, who has a 2-year-old unraced filly by Into Mischief   named Prank.

The victory by Mo Donegal, who captured the Wood Memorial Stakes Presented by Resorts World Casino (G2) at Aqueduct Racetrack before finishing fifth in the Kentucky Derby after a slow start from the rail, completed a 2022 Triple Crown season that saw three different winners of the races for a fourth straight year. With Rich Strike , who won the Kentucky Derby at 80-1 odds, finishing a well-beaten sixth in the Belmont, it left no doubt in Repole’s mind about the top 3-year-old after the first half of the season.

“Mo Donegal beat the Preakness (G1) winner (Early Voting ) in the Wood and the Kentucky Derby winner was like 200-1,” Repole said. “So I’d say, Mo Donegal.”

Repole might also own a share of the top 3-year-old filly as Nest, who is also owned by Eclipse Thoroughbred Partners and Michael House, was a solid second after stumbling at the start. The daughter of Curlin   was coming off a second in the Longines Kentucky Oaks (G1) on the eve of the Kentucky Derby.

The 154th Belmont Stakes saw We the People  grab the early lead, hoping to serve up an encore of his 10 1/4-length gate-to-wire victory in the Peter Pan Stakes (G3) at Belmont.

But jockey Flavien Prat had company on the front end as Daniel Alonso’s Skippylongstocking  chased a length behind after fractions of :23.99 and :48.49. After a mile in 1:37.74, jockey Irad Ortiz Jr. had Mo Donegal fourth and poised to strike from the outside.

As We the People, the 7-2 second choice, and Skippylongstocking continued to duel turning into the stretch, Mo Donegal swept past them and opened a three-length lead at the eighth pole.

Behind them, the only one moving with some gusto was Nest, who took second, 3 1/4 lengths over Skippylongstocking, a son of Exaggerator   trained by Saffie Joseph Jr. We the People was fourth.

For Ortiz, a second Belmont victory was doubly rewarding as Crawford said after the race that he will give the rider a breeding share in Mo Donegal.

In winning a fourth Belmont, Pletcher achieved the feat for the fourth time with a horse who ran on Kentucky Derby weekend and then received five weeks rest before the Belmont.

“We have certain things we want to do such as coming here immediately after the Derby or the Oaks and getting the horses settled in and trained over the track,” said Pletcher who has four wins and seven seconds in the Belmont. “It’s a similar pattern we follow each time. It’s not rocket science. We are just trying to take advantage of being at home.”

Much like Reople, the New York-based Pletcher enjoyed being at home for another classic win.

“It’s our family’s favorite race,” he said. “Our kids grew up here and went to school here and we’ve always felt like it’s our hometown race. The hometown feel adds some specialness to it.”

The Belmont brought a disappointing end to the Triple Crown for RED TR-Racing’s Rich Strike who produced a storybook victory at huge odds in the Kentucky Derby.

“The pace was slow, but he had him where he wanted to be,” trainer Eric Reed said about the 4-1 third choice. “He wasn’t the same horse.”

Full Result of the race