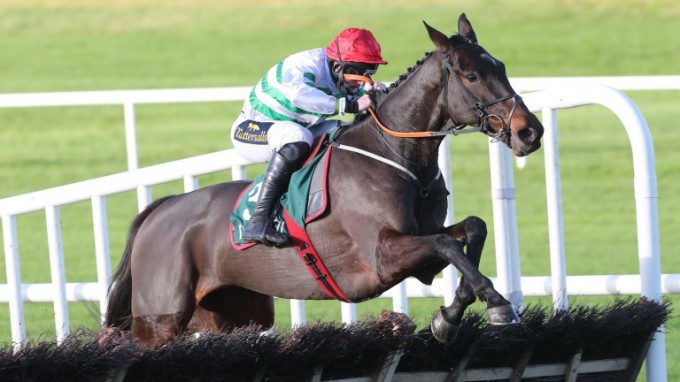 The last two winners of this have won the Ballymore at the Cheltenham Festival on their next start, but whether there is another Bob Olinger or Envoi Allen hiding in the long grass this time is debatable.

Whatdeawant, a 12-1 shot with Paddy Power for the Ballymore, is the chosen one from Closutton, while Gordon Elliott is double-handed with a pair of Bective Stud-owned novices who appear Albert Bartlett types.

Elliott has won this race three times in the last five years with Death Duty (2017), Battleoverdoyen (2019) and Envoi Allen (2020), and it is interesting to see him pitch two of his best staying novice hurdlers against each other.

Davy Russell continues his association with Hollow Games. The pair are two from two together, most recently in the Grade 3 Monksfield Novice Hurdle at Navan where Hollow Games justified odds-on favouritism in workmanlike fashion.

That event developed into a sprint and he had the necessary tools to deal with the speed test up the straight. His jumping, in particular, was very slick.

Ginto has an unblemished record over hurdles too. He, like Hollow Games, is also two from two and his best effort arrived last time in the Grade 2 Navan Novice Hurdle in which he put 11 lengths between himself and Eric Bloodaxe at the line.

The form of that was franked by the runner-up at Limerick a couple of days ago and he is starting to live up to his €470,000 price tag.

According to the RPRs of their most recent outings, Ginto is the better of the pair. He earned an RPR of 143 when beating Eric Bloodaxe, while Hollow Games earned just 127 for his effort.

The fact Willie Mullins replies on Whatdeawant is very interesting indeed, given the amount of top novice hurdlers who reside in Closutton.

He won his maiden hurdle on the same day as Ginto at Navan, and over the distance, and his time was 0.3 seconds quicker. The further he went, the better he looked.

Bob Olinger was brilliant in this race last year and Grand Jury represents Henry de Bromhead and Rachael Blackmore this time, in the same colours of Robcour.

He made hard work of justifying 2-7 favouritism in a maiden hurdle at Punchestown but, in truth, the outcome never looked in any doubt, and he looks smart.

A first Grade 1 success for Cork-based trainer Jonathan Sweeney would be some story and it is not beyond the bounds of possibility with the useful Churchstonewarrior. He will need to step up considerably from his latest effort in a Grade 3 at Cork to pen that fairytale, though.

The favourite has won this Grade 1 for the last six years in a row, but Whatdeawant might be the one to buck that trend.

Whatdeawant has already beaten Ginto in a Fairyhouse bumper almost a year ago to the day, when Patrick Mullins was on board.

The champion amateur said the six-year-old shows more on the track than he does at home but expects a bold showing.

Mullins said: “He has surprised us on the track. His form is better than his homework, which is always a great sign. He’s a very uncomplicated ride. He stays well but showed a good turn of foot to beat Ginto in his bumper. On that form we’d have to be very hopeful.”

Whatdeawant carries the familiar colours of Sean and Bernardine Mulyran and Mullins said it evoked fond memories of Ballyamber, who finished fifth to Galileo in the 2002 Royal and Sun Alliance Novices’ Hurdle.

He said: “It’s nice to have a horse in training again for the Mulryans. We had Ballyamber around 20 years ago for them who won a lot of races, and there were a few others as well, but they came back to us with three or four horses last year and Whatdeawant is the best of them at the moment.”

Jonathan Sweeney, trainer of Churchstonewarrior
He seems to be able to quicken better out of nicer ground. The ground was grand in Cork but Denis [O'Regan] just felt he struggled a little bit around the bend turning in. He said that it was just a little tacky and he couldn’t get through it as well. It would be a dream to have a Grade 1 winner.

Gordon Elliott, trainer of Ginto and Hollow Games
It’s a race we like to run horses in. It’s 2m4f on a brilliant track. Ginto looks like he could be anything. He’s a horse for the future. He looks to be a chaser and was bought to be a chaser, so whatever he does over hurdles is going to be a bonus. Hollow Games is a nice horse. He’ll like the step up in trip. He doesn’t do anything flashy at home but he’s always there for you on the racecourse. They both deserve to take their chance in a race like this and we’re looking forward to it.

Willie Mullins, trainer of Whatdeawant
He made hard work of winning at Navan last time, however I think he’s way better than that. The mistake at the second-last cost him his position and with that run under his belt he’s entitled to improve. He could be value for money.