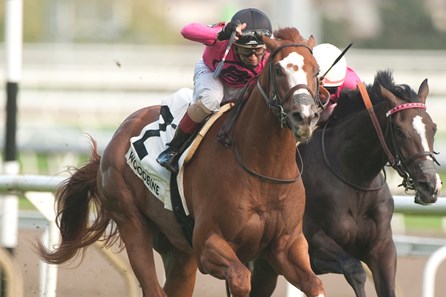 God of Love closed stoutly to give freshman sire Cupid (Tapit) his first graded victory in the GIII Grey S. at Woodbine Sunday. The chestnut colt broke from the outside and was caught five wide… [To read this entire TDN News Story, click here.]

Verbal replicated his impressive debut victory when he came flying late to win the GIII Cecil B. DeMille S. at Del Mar Sunday. The bay colt was unhurried from his outside post and was well back… [To read this entire TDN News Story, click here.]