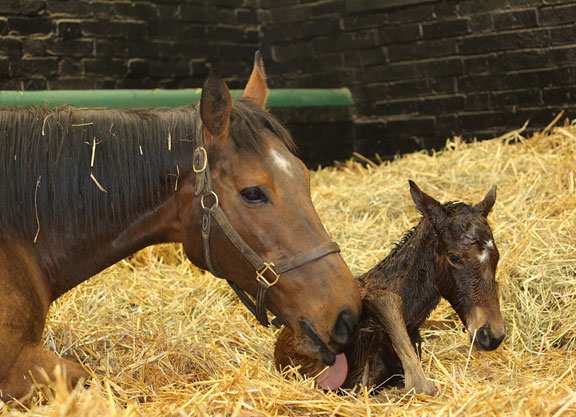 Kind and her Kingman colt | Juddmonte

Stud Director UK Simon Mockridge commented, “I cannot thank the Rossdales and Juddmonte team enough for the tireless care they have given Kind. To many she will rightfully always be best remembered as the dam of Frankel and Noble Mission, to us at Juddmonte she will always be Kind by name and Kind by nature.”

Foaled Apr. 21, 2001, Kind was sent to the yard of Roger Charlton and won a brace of listed races during three seasons on the racecourse. Her best showing was a third in the G3 Ballyogan S. in 2005 and she was retired with a mark of 13-6-0-4 and $132,320 in earnings. However, it was as a broodmare that she truly flourished.

Overall, she produced eight foals, six runners and five winners. Bullet Train (GB) (Sadler’s Wells), a winner of the G3 Derby Trial, was Kind’s first foal. She visited the court of Galileo (Ire) in 2007 and her best performer, the outstanding European Horse of the Year Frankel was the result. Besides that G1 2000 Guineas hero, Kind also produced three-time Group 1 winner Noble Mission (GB) (Galileo {Ire}) and the multiple stakes winner and dual group-placed Joyeuse (GB). The latter is already the dam of the G1 Coronation S. third Jubiloso (GB) (Shamardal) and the MSP Jovial (GB) (Dubawi {Ire}). Her 3-year-old Galileo filly is named Chiasma (Ire) and is in training with John Gosden. Kind’s name is also on the IFHA’s International List of Protected Names.

Barring her latest foal, the other five colts out of Kind have all found their way to stallion barns, with Frankel showing the way at Banstead Manor Stud for Juddmonte with great success. Bullet Train stands at Woodfield Farm Stud and Proconsul (GB) (Galileo {Ire}) is at Annshoon Stud, both in Ireland. Noble Mission, after spending several season at Lane’s End Farm in Kentucky, is standing his first season in Japan, while the winning Morpheus (GB) (Oasis Dream {GB}) is at Haras de Toury in France.