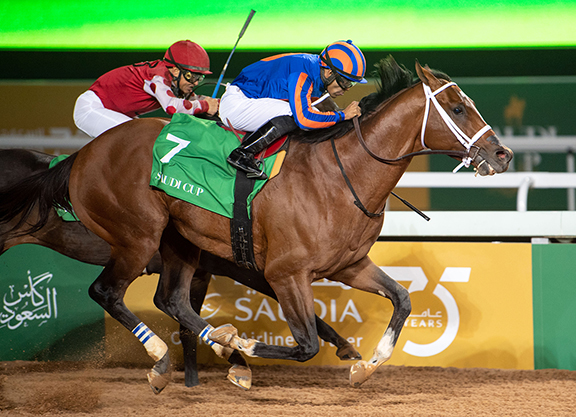 Interviewed on the Fox Sports 1 coverage of the Saudi Cup, Prince Bandar Bin Khalid Al Faisal, chairman of the Jockey Club of Saudi Arabia, said that he expected there to be “movement” on the U.S. case against Jason Servis which had been holding up the payment of the purse for a year.

Servis, of course, was the trainer of 2020s inaugural running of the Saudi Cup, Maximum Security (New Year’s Day), who has never been awarded prize money for the win. Two weeks after the race, Servis was one of 27 people named in a criminal indictment for “widespread, corrupt scheme by racehorse trainers, veterinarians, PED distributors and others to manufacture, distribute, and receive adulterated and misbranded PEDs and to secretly administer those PEDs to racehorses under scheme participants’ control,” by the U.S. Attorney’s Office for the Southern District of New York.

While the rest of the field was paid their share of the purse, including runner-up Midnight Bisou (Midnight Lute), Maximum Security‘s $10 million winning payout has been withheld.

Nick Luck, the host of the program, asked Prince Bandar about the issue.

“It was a wonderful night last year,” said Luck. “We all left here with a real spring in our step. It was a terrific horse race between Maximum Security and Midnight Bisou, but racefans around the world are familiar with what has happened since, because Maximum Security’s then-trainer was indicted on very serious illegal medication charges, just a couple of weeks later. What is your position at the moment, because you have withheld the purse money from Maximum Security’s owners up to this point?”

“That is true,” said Prince Bandar, “and we are sort of in a hold position now waiting for the U.S. authorities to move forward with that case. We understand in the coming six weeks there will be some kind of movement on it which will allow us to move forward and bring this to a close. I feel we don’t have long to wait for it, but as you said, it’s an unfortunate situation. I had a soft spot for that horse. I thought he got a raw deal in the Kentucky Derby. It was fair, but he was the best horse on the day. Here, he was the best horse on the day and he was a victim of circumstances that have nothing to do with the horse himself, but we have to abide by the international rules and regulations and somebody will get the prize money. We have paid out all of the other positions, and I feel that within six weeks, hopefully, we’ll put this issue to a close.”

Jim Gagliano, the president and chief operating officer of The (American) Jockey Club, said that he had not been informed on any movement on the case. “These are government proceedings and they don’t provide updates,” said Gagliano.

The most recent news on the case came on February 5, when Jorge Navarro and Seth Fishman, DVM, the trainer and veterinarian indicted on the same charges, both filed motions to dismiss the drug alteration and misbranding conspiracy charges levied against them in United States District Court (Southern District of New York).” (fonte : TDN) 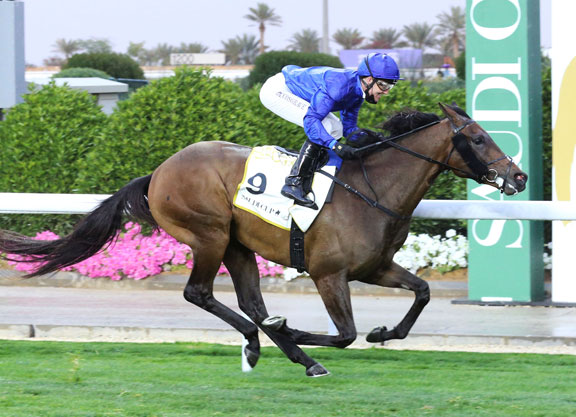 Gifts Of Gold (Ire) (Invincible Spirit {Ire}) turned around his recent form in emphatic fashion when charging late to take the $2.5-million Red Sea Turf H. going 3000 metres in Riyadh on Saturday. Poised in third and off the rail as defending winner Call The Wind (GB) (Frankel {GB}) set a moderate tempo, Gifts Of Gold was steered wide by Pat Cosgrave as the field came off the last of three turns as Call The Wind called it a day. Charging down the middle of the track, Gifts Of Gold hit the lead at the furlong marker and was unchallenged thereafter, hitting the line a length and a quarter to the better of Spanish Mission (Noble Mission {GB}). The win marked a double for Godolphin, which won the stc 1351 Turf Sprint one race earlier with Space Blues (Ire) (Dubawi {Ire}).