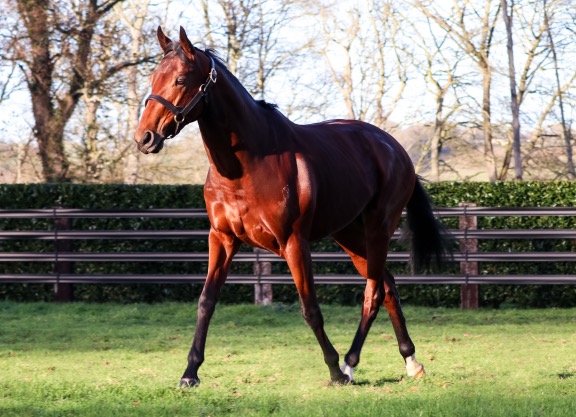 It has been a year of change at Haras d’Etreham. In August it was announced that the farm’s flagship stallion Wootton Bassett (GB) had been sold to Coolmore. The dominant Irish operation was wise to catch a rising tide but it is Etreham, and in particular Nicolas de Chambure, who must be credited with establishing the increasingly popular stallion.

If we accept the conservative estimate that only one in ten stallions really make it, then it is clear that finding Wootton Bassett’s replacement will be no easy task. Perhaps Etreham already has a worthy successor in his first-crop champion son Almanzor (Fr). Time will tell. And as back up, the farm welcomes two new stallions this year, both Group 1 winners, both by hugely popular sires, and one of them a Classic winner.

Most farms would welcome the chance to start the career of Persian King (GB) or Hello Youmzain (Fr). Etreham has the golden opportunity of launching them both together, having kept the latter in training for 2020 after buying him the previous season in partnership with New Zealand’s Cambridge Stud. Persian King, who was raced by Godolphin in partnership with his breeder Ballymore Thoroughbred, also raced on at four, adding the G1 Prix d’Ispahan and G1 Prix du Moulin to his victory in the Poule d’Essai des Poulains at three, as well as finishing an honourable third in the Prix de l’Arc de Triomphe as his parting shot before retirement.

“Persian King is one of the best sons of Kingman so he was attractive to many studs around Europe,” says de Chambure. “I think the dynamism of France recently helped us to be able to buy into him and for his owners to be happy about the idea of our partnership, and for the horse to stand in France.”

Persian King was one of the early stars among Kingman’s offspring, winning three of his four starts at two, including beating subsequent 2000 Guineas winner Magna Grecia (Ire) in the G3 Autumn S. at Newmarket. While that outing from his native France suggested that his trainer Andre Fabre may well target the 2000 Guineas with the imposing colt, Persian King stayed at home as a 3-year-old, winning the G3 Prix de Fontainebleau en route to his Classic success and then finishing second to Sottsass (Fr) in the Prix du Jockey Club.

De Chambure says, “He came back better than ever this year as a 4-year-old. I think his run in the Arc was a bit special for the breeders. They saw something that they didn’t think he was capable of doing. We don’t see that much these days, trainers trying something a bit different with their horses. I think people like the fact that he tried and ran very well in the Arc.”

He adds, “When we buy a stallion prospect their sire is very important so the fact that he is by Kingman is a big plus. It gives French breeders access to that sireline.”

Thanks to Haras d’Etreham and Cambridge Stud, French breeders now also have easy access to a son of Kodiac (GB) in the dual Group 1-winning sprinter Hello Youmzain. While there is a growing throng of Kodiac’s stallion sons in Ireland and Britain, the former Kevin Ryan trainee is the first to retire to stud in France.

“There was never much of a culture of sprinters in France,” de Chambure explains. “The last really good one to retire was Anabaa. This is something a little bit new, and when we found out that he could be bought last year as a 3-year-old it didn’t take us too long to make up our minds. And we were very happy also to keep him in training this year because he won another Group 1 for us and was second in the Maurice de Gheest. So even though we couldn’t go racing, it was a very good year for us and Kevin Ryan did a very good job with him.”

“For a sprinter he has a lot of scope,” de Chambure says. “He’s a good size for a Kodiac and a very good walker, so this, as well as the fact that he’s out of a Shamardal mare with a bit of pedigree as well, I think he ticks a lot of the boxes. I’m sure he’ll get some good 2-year-olds but I can see him getting good milers, and even ten-furlong horses, because he’s got a great mind, and bred with mares with a just a little bit more stamina I’m sure he will be able to. And we hope for that because I always like a stallion who can produce horses that can stay a bit more.”

The winner of the G2 Criterium de Maisons-Laffitte in his debut season, Hello Youmzain made two successful trips to Haydock at three to win the G2 Sandy Lane S. followed by the G1 Betfair Sprint Cup. For most stallion operations that would have been enough but, in announcing their purchase of him in October 2019, the partners also declared that he would remain in training at four.

“I think I’ll always do that,” says de Chambure of a decision which was not without its risks. “With Almanzor, we bought into him when he was three and he won the Champion Stakes, and everybody through that we were going to retire him because it was the easy thing to do. But I feel we are all retiring horses too soon these days—stallions and mares. We are driven by the whole economy of the thing but we are all in the industry to have horses to win races, and for me that must be the most important thing rather than the economy around it. When you are lucky enough to own part of a Group 1 horse I think it is important to keep them in training, and horses still progress from three to four. We have enough stallions, we have enough mares, and I think we need to enjoy the sport more. Obviously prize-money doesn’t help in Europe but I still think we need to give the horses more exposure and keep them running more. So in the end, yes, it was a little bit of a risk, but we were happy to do it.”

Of course, this investment in enticing stallion prospects would have been harder to do without the trading of Wootton Bassett. Now firmly established in the vanguard of European stallions, when he retired to stud in 2012 following a winless 3-year-old season he was no easy sell.

De Chambure reflects, “He was very hard work the first couple of years. He was the first stallion I bought when I took over the stud in 2011. I guess people didn’t know me then and the horse wasn’t perfect and there was a question mark over [his sire] Iffraaj (GB) at the time, and so all that together made him not that attractive for breeders.”

He continues, “Everything he did was from very little opportunity but then he got bigger numbers of mares and he has just shown that he is an exceptional stallion. It’s good to see all the French breeders who used him at €4,000, €6,000, €20,000 doing well. He has helped them at the sales and with their families, and there were a lot of French people who bought into him over the years. It’s really a success story for France and it was good to be able to share it with breeders.”

Following a year in which Wootton Bassett has been represented by the Group 1 winners Audarya (Fr) and Wooded (Ire), the horse who was the first to score for him at the top level, Almanzor, will now be faced with another test as his first runners take to the track in 2021.

Of his yearlings, de Chambure says, “It wasn’t the easiest year to be launching a stallion with their first yearlings but I think they were well received. Obviously the reputation now of Wootton Bassett is different to a few years ago and that has given Almanzor even more credit.

“They have a bit of size and quality and there’s a good vibe. Obviously we bred him and we raced him for a while so there’s huge expectations for his first 2-year-olds but there’s not a lot we can do now, we just have to wait and watch them run next spring.”

“Goliath Du Berlais won over fences in France so I was kind of looking for a Flat horse who could bring something different. The Montjeu (Ire) sireline has done really well [in jump racing] and there’s no reason that Camelot won’t. Funnily enough, Latrobe is also out of a Shamardal mare, the same as Hello Youmzain. He is a beautiful horse with a lot of quality, and plenty of size and scope for the National Hunt mares.”

With the size of modern-day stallion books being a bone of contention in the industry, breeders may take some comfort in the knowledge that the Etreham horses are limited to 140 mares in a season, including the newcomers.

“We do the same for all our stallions, the National Hunt stallions as well,” de Chambure says. “We just feel it is creating a little bit of a rarity and it’s a way to respect the breeders’ investment in a share, or a nomination. They know they have a foal or a yearling that has a certain value because the market is not loaded with them. There are different ways to help breeders and I feel it is one of the good ways to help them to create value.”