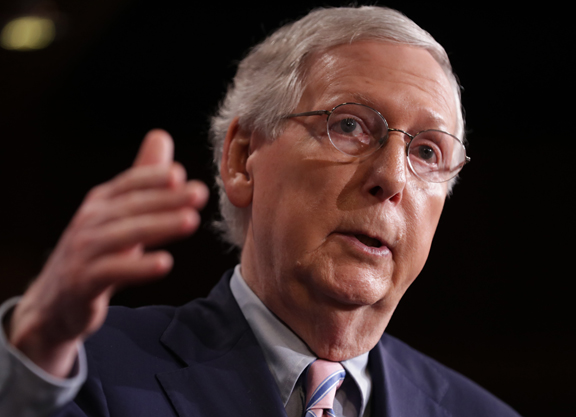 Included in a year-end government funding bill that included a $900-billion COVID-19 relief package, the Horseracing Integrity and Safety Act was passed by the House of Representatives and Congress Monday night. The bill is expected to be signed into law shortly by President Donald J. Trump, which would mean that the Horseracing Integrity and Safety Act, once considered a longshot to pass, will become a reality.

The passage of the bill was a a bipartisan effort led by Congressmen Paul Tonko (D-NY) and Andy Barr (R-KY) and Senate Majority Leader Mitch McConnell (R-KY).

“Kentucky’s cherished horseracing traditions deserve to be protected. I’m proud the Senate agreed to my legislation to preserve our signature racing industry and the 24,000 workers who support it,” McConnell said in a statement. “With the leadership of Congressman Andy Barr and the partnership of sport leaders, horse advocates, and fans, we’re one step closer to promoting fairness and safety across Thoroughbred racing. As Majority Leader, I made this Kentucky-focused legislation a top priority in the Senate. I look forward to this major advancement for our beloved sport becoming law.”

Barr said, “With today’s passage of HISA in Congress we are in the final stretch of achieving the most transformational and consequential reform of the Thoroughbred horseracing industry since enactment of the Interstate Horseracing Act of 1978. For almost a decade, I have worked with industry stakeholders and my Congressional colleagues to build consensus around reforms that will protect equine athletes and strengthen confidence and international competitiveness in the sport. I am proud to champion this historic, bipartisan legislation with Congressman Paul Tonko and Leader McConnell and I look forward to President Trump signing it into law.”

“It’s a great day,” Tonko said. “It’s going to save a sport, provide additional jobs and will be so respectful of the equine athletes, the jockeys and others who are involved. It begins and ends there. I am thrilled about it.”

The push to have the Act passed was led by The Jockey Club and was joined by several major racetracks and organizations. The list includes the Breeders’ Cup, the NTRA, Keeneland, Churchill Downs, the New York Racing Association, Del Mar, The Stronach Group and the Water Hay Oats Alliance.

“I’d like to thank Senate Majority Leader McConnell for diligently focusing on getting this much-needed bill included in the must-pass Omnibus Appropriations Bill,” said Stuart S. Janney, III, Chairman of The Jockey Club. “Leader McConnell has been a powerful force when it comes to promoting and supporting the Thoroughbred industry in Kentucky and throughout the nation. With the passage of this bill, we restore confidence with our fans that the competition is clean, the game is fair and the horse and rider are protected.”

The bill calls for a phase-in period and will not take effect until July 1, 2022 at which time the “Horse Racing Integrity and Safety Authority” will be in place and responsible for “developing and implementing a horseracing anti-doping, end-medication program and a racetrack safety program for covered horses…”

The Horse Racing Integrity and Safety Act means sweeping changes for a sport that has been rocked by recent doping scandals and has come under fire from animal rights activists and media outlets over equine fatalities on the racetrack. Once the Act goes into effect, drug testing and the policing of the sport will be turned over from the individual state racing commissions to the United States Anti-Doping Agency (USADA). USADA has an impressive track record and it is widely believed that it will be more effective in catching and punishing cheaters than the current system. All medication and safety rules will be standardized nationwide.

“People will come to, hopefully, trust [the sport] again and have confidence in it,” said Arthur Hancock, who, along with his wife Staci, has been a leading voice for the Horseracing Integrity and Safety Act. “We’re going to clean out the drugs and thugs.”

“This is a monumental step forward that will help secure the future of Thoroughbred racing in the United States,” said Dave O’Rourke, President & CEO of the New York Racing Association, Inc. (NYRA). “For the first time, the sport will have a unified set of national safety and integrity standards to replace an outdated system that relied on patchwork regulation. The HISA will achieve the type of reforms long supported and advanced by NYRA, including a national approach to medication control and the strongest anti-doping authority the sport has ever seen.”

The bill was originally introduced six years ago by Tonko and Barr, but seemed to be going nowhere in Congress. That all changed when McConnell announced his support in an Aug. 31 press conference held at Keeneland. Shortly thereafter, a stand-alone bill was passed in the House, but had not come up in the Senate until Monday’s vote.

The language covering the Act takes up 64 pages in the omnibus bill, but leaves some questions unanswered. In particular, where the funding will come from to pay for USADA and the Horseracing Integrity and Safety Authority remains somewhat unclear. The bill states that initial funding to establish the Authority and underwrite its operations shall be provided through loans obtained by the Authority. The funding will eventually have to come from the states, but it is not known how they will raise the money.

The “Authority” will be governed by a nine-member Board which must be put in place prior to July 1, 2022.

Drew Fleming, President and CEO of Breeders’ Cup
“This marks the single most significant safety and integrity development in the history of Thoroughbred racing. This moment also demonstrates that great progress can be accomplished when the industry works together. We recognize that there is more to be done and we look forward to working with our counterparts to build on this momentum and further improve the sport for generations to come. Breeders’ Cup thanks House and Senate leadership for their support and applauds Senate Majority Leader Mitch McConnell (R-KY) for bringing the industry together to build consensus on meaningful reforms and regulations. Senators Dianne Feinstein (D-CA), Kirsten Gillibrand (D-NY) and Martha McSally (R-AZ), along with Representatives Andy Barr (R-KY) and Paul Tonko (D-NY) were also instrumental in this all-hands-on-deck effort to making racing safer and more transparent. HISA will increase public confidence in one of our country’s oldest sports by creating uniform anti-doping and medication control and racing operations programs that will be developed and enforced by an independent Horseracing Integrity and Safety Authority (the Authority). Breeders’ Cup is proud to have played a role in this effort.”

“We thank Senate Majority Leader Mitch McConnell for his pivotal role in the passage of the Horseracing Integrity and Safety Act (HISA) by the U.S. Senate. We also applaud Senators Kirsten Gillibrand (D-NY) and Dianne Feinstein (D-CA) and Congressmen Andy Barr (R-KY) and Paul Tonko (D-NY) and other allies in Congress whose support helped make this watershed moment possible. We look forward to President Trump signing the HISA into law and by doing so, commencing the establishment of an independent and well-informed central authority that will ensure the integrity of our sport and the safety of our human and equine athletes nationwide.”

“Senator McConnell’s leadership has been critical in bringing the Thoroughbred industry together and prioritizing the passage of the Horseracing Integrity and Safety Act. This is a pivotal moment for the future of horseracing, a sport that will now be governed by world class, uniform standards across the United States.”

“The passage of HISA is a landmark moment for the Thoroughbred racing community’s ongoing efforts to ensure our horses are running under the safest and most transparent conditions possible and to protect the integrity of the sport for our athletes, horsemen and fans. The independent Authority established by HISA will bring a level of consistency and accountability that will improve our sport for years to come as they workto develop and implement uniform anti-doping, medication control and operational measures. Keeneland is honored to have been involved in this ground-breaking legislation.”

“As the enforcement agency for drug testing and medication policy for the U.S. Olympic team and other major sports, USADA is ideally suited to work with the Horseracing Integrity and Safety Authority. USADA and the Authority will ensure rigorous race-day and out-of-competition testing and modernize the regulation of Thoroughbred racing in the U.S. This would not have been possible without the outstanding support we received from the original members of the Coalition for Horse Racing Integrity, many of the prominent organizations in Thoroughbred racing, the leaders in the Standardbred industry, in particular Jeff Gural of the Meadowlands, and the numerous animal welfare groups that rallied their members to voice support for HISA.”

“Horsemen should view Monday’s passage of the Horseracing Integrity and Safety Act with hope. It’s been clear for a generation that a systematic approach to equine welfare and competitive integrity is needed and the passage of HISA is the first step in that direction.

The real work starts now, as the Authority has a mere 18 months to flesh out the legislative framework. NYTHA looks forward to working with the Authority to ensure that horse racing has an effective system ensuring the safety of our equine athletes and a level playing field for all participants.”

“The Coalition for Horse Racing Integrity (CHRI) strongly applauds Majority Leader Mitch McConnell (R-KY) for attaching the Horseracing Integrity and Safety Act (HISA) to the must-pass omnibus appropriations bill that was just agreed to by House and Senate leadership. After five years, it is very gratifying to see Congress embrace this bipartisan legislation that is critical for the health of equine athletes and for the future of horse racing. We want to thank all the members of the coalition for the patience and perseverance in this five-year effort. It took their willingness to craft a bill that industry and animal welfare groups alike could support and have the determination to see it through. This is a great day for racing and our equine athletes.” (by : TDN)