22/11/2019. Major increases across the board on Day 1 of November Breeding Stock (Goffs) // Bizakov Buys Haras de Montfort and Préaux 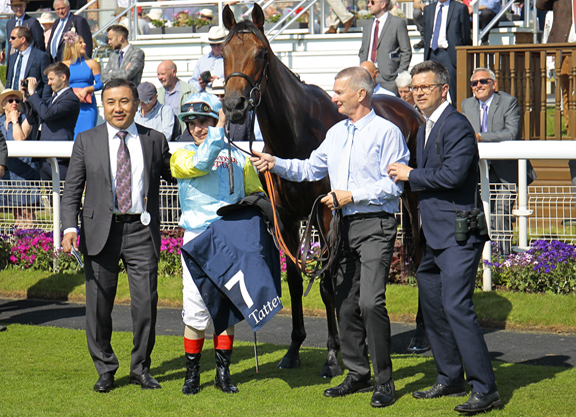 Nurlan Bizakov with Nausha after her Musidora S. victory | racingfotos.com

Nurlan Bizakov, the owner of Hesmonds Stud in the UK, has recently extended his breeding portfolio with the purchase of Haras de Montfort & Préaux in France.

Mathieu Alex, who has been at the Normandy stud since 2011, will take on the role of Stud Director, while Montfort & Préaux founder Sylvain Vidal will work as a consultant for the stud.

Bizakov, a native of Kazakhstan, said, “I am honoured to join the ranks of the French breeders, and I am delighted to participate in the continued development of Montfort & Préaux. This stud has seen numerous quality racehorses pass through its gates. Montfort & Préaux hosts a passionate clientele, with whom I will be delighted to collaborate, notably Mr Augustin-Normand, one of the leading French owner-breeders, who has had incredible success.”

Bizakov will continue to stand stallions at the farm which has been home to Prix du Jockey Club winner Le Havre since his retirement to stud in 2010.

He added, “As everybody knows, leading sire Le Havre stands at the stud. [He is] one of the premier European stallions and sire of Villa Marina, recent winner of the G1 Prix de l’Opéra on Prix de l’Arc de Triomphe day at ParisLongchamp. Alongside him stands Recorder, who is owned by Her Majesty The Queen. The team, the infrastructures, and the land are all superb.”

Bizakov has owned the 700-acre Hesmonds Stud in Sussex since 2010. Managed by Tony Fry, it is home to the owner-breeder’s 35 broodmares.

Explaining his decision to invest in France, Bizakov said, “I have nurtured a passion for European racing for over 20 years. France possesses, as far as I believe, some of the greatest potential for racing in Europe. Racing, breeding, sales: there is a very favorable system for breeders and owners here. For several years now, I have invested in shares in stallions based in France and I regularly send mares to Le Havre (Ire), Siyouni (Fr), Almanzor (Fr), Wootton Bassett (GB), Dabirsim (Fr), Kendargent (Fr).”