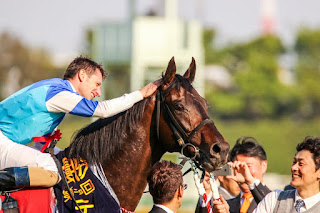 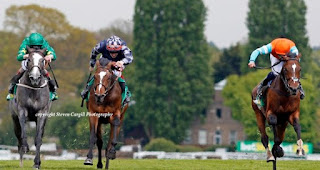 Rouget Back On Top With Cape Cross Filly At Toulouse Building on wins over seven furlongs at La Teste de Buch in August and over 7 1/2 at Cagnes-sur-Mer the following month, Onthemoonagain was third in the G3 Prix des Reservoirs over a mile at Deauville in October and returned in style to provide Jean-Claude Rouget with some welcome cheer. Forced to race worse than mid-division as opponents tussled for prominent positions around this testing circuit, the bay moved through a split at the top of the straight as the outsider Fuenteesteis threatened to get away. Scything down that rival with 150 metres remaining, she was quickly clear with Christophe Soumillon able to drop his hands close home. GALIKEO (GB) (c, 3, Dansili {GB}–Galikova {Fr} {G1SW-Fr, $1,127,103}, by Galileo {Ire}), a last-out second to subsequent Listed Prix de Suresenes victor Avilius (GB) (Pivotal {GB}) going 9 1/2 furlongs at Chantilly Apr. 9, was best away from the boxes and led from the outset here. Holding sway throughout, the crowd’s 8-5 choice came under pressure soon after turning for home and was ridden out inside the final 300 metres to hold the vain bid of Ronaldo (Ger) (Scalo {GB}) by a length.

He is the first foal and winner produced by G1 Prix Vermeille victress Galikova (Fr) (Galileo {Ire}), who also hit the board in the G1 Prix de Diane, G1 Prix Jean Romanet and G1 Grand Prix de Saint-Cloud. Galikova is herself half to a plethora of black-type performers headed by the outstanding champion and three-time GI Breeders’ Cup Mile heroine Goldikova (Ire) (Anabaa). The homebred bay is kin to the 2-year-old colt Galikor (GB) (Dansili {GB}) and the yearling filly Galibawa (GB) (Dubawi {Ire}). Lifetime Record: 4-1-2-0, €22,700. 7th-BEL, $80,000, Alw (NW2$X), Opt. Clm ($62,500), 4-28, 3yo/up, f/m, 7fT, 1:22.48, gd.
TAKE THESE CHAINS (IRE) (f, 4, Fastnet Rock {Aus}–Take the Ribbon {GSW & GISP, $372,102}, by Chester House) remained perfect in her three trips to post to date, easing home a geared-down winner of a second-level allowance over seven grassy furlongs Friday afternoon at Belmont Park. Taken back off an early pace that was only moderate, the ‘TDN Rising Star’ was given her cue on the turn by Javier Castellano and rolled up effortlessly outside of Cover Song (Ire) (Fastnet Rock {Aus}) to race within easy striking distance as they left the quarter pole behind. Showing a quick burst of acceleration, the bay put the race to bed in a matter of strides and was effectively eased down for the final 100 yards to score as she pleased by 3 1/2 lengths.

Take the Ribbon carried the colors of Eurowest Bloodstock to victory in the GIII Churchill Distaff Turf Mile, a runner-up effort in the GI Garden City BC S. and the GII Just a Game S. The latter event, now a Grade I on the Belmont S. undercard, is a possible target for Take These Chains. The dam of Bookrunner (Tiznow), G1SP-Ity, GSP-Fr, $149,856, Take The Ribbon was bred to Medaglia d’Oro in 2011 and dropped her first European-bred foal in 2012. She is the dam of a 2-year-old Dansili (GB) filly and a yearling colt by Sea the Stars (Ire). Lifetime Record: 3-3-0-0, $118,200.

Click for the Equibase.com chart or VIDEO, sponsored by Fasig-Tipton.