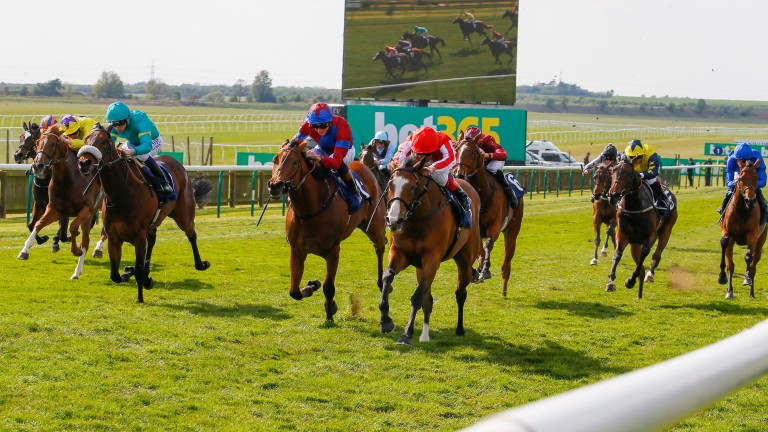 With the trial now run and the Classic looming, John Gosden is not saying the latest Nell Gwyn heroine will win the Guineas – but he is also very much not saying she won’t.

It was for Gosden that Dettori landed his first Nell Gwyn in 1999. Eighteen years on the pair once again teamed up, this time with a filly who had quickened smartly to win a Kempton maiden in November. That was promising. Upped significantly in class for her second start, the promise was fulfilled.

A deep field full of proven Group performers had assembled for a Lanwades Stud-backed contest that has not produced the Guineas winner since 2006. It is far from implausible Daban could bridge that gap, given she overcame racing keenly in the early stages to deliver a sustained challenge that carried her past Unforgettable Filly and Poet’s Vanity.

Most bookmakers quote Daban for the Qipco-sponsored Classic at between 10-1 and 14-1, the same sort of odds attached to Saturday’s Newbury-bound stablemate Dabyah, another to race for Abdullah Saeed Al Naboodah. 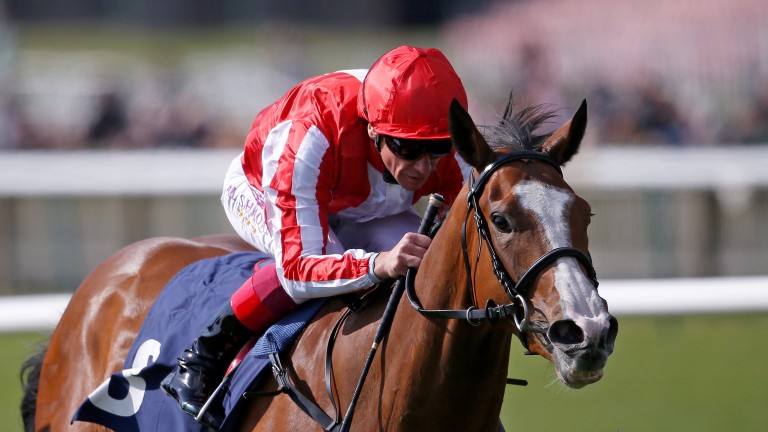 “I don’t see any reason why we wouldn’t come back for the Guineas,” said Gosden. “The owner also has Dabyah running in the Fred Darling, but Dabyah has been to France already, so maybe this filly will come here and Dabyah will go back to France.

“I asked the jockey today if she would stay a mile and he thinks she will. That’s all I needed to hear.”

The jockey who passed on those encouraging words has now claimed the last four Nell Gwyns. He certainly likes the fourth.

“She travelled like a winner and she quickened up well,” said Dettori.

“John has kept banging on about her working well and saying she has a great turn of foot. He was spot on.”

Assuming Daban returns here two weeks on Sunday, she will meet the second and third, whose connections were both pleased. “She’s trialled and run very well, so we’ll have a go on the big day,” said Unforgettable Filly’s trainer Hugo Palmer. Andrew Balding expects Poet’s Vanity to “strip fitter” on that day.

Conversely, Ballydoyle pair Roly Poly and Brave Anna were disappointing in seventh and tenth. The operation’s Rhododendron continues to head the Guineas betting at 3-1. In Daban, she may face a proper contender.

“She is the kind of filly who they will know they’ve had a race if they go by her,” said Gosden. “She may well be in the frame. I wouldn’t start banging any more than that but I also wouldn’t discount her.”

Gosden is entitled to be biased, but it seemed a fair assessment. DAB HAND
Once-raced prior to this Classic prep, Abdullah Saeed Al Naboodah’s Daban (Ire) (Acclamation {GB}) overcame potential stagefright to overturn some proven fillies and become a fascinating latecomer into the picture for the G1 1000 Guineas back here May 7. Keen early held up by Frankie Dettori behind the leaders, the 12-1 shot who showed a deadly turn of acceleration over this seven-furlong trip on Kempton’s Polytrack in November had plenty in reserve for the uphill climb to the line. After mastering fellow outsider Unforgetable Filly (GB) (Sepoy {Aus}) in the last 50 yards, the bay asserted to win by 3/4 of a length and impress her rider in the process. “She travelled brilliantly, she showed a good turn of foot and she can only improve,” Dettori said, before confirming that she is in the class of a Guineas protagonist. “She showed a good attitude. She has won her trial and she’s entitled to give it a go.”

John Gosden had previously collected four renewals of this prestigious Guineas trial, but punters were wary of taking the plunge on this unproven filly who appeared to be filling the void of her stablemate, the G1 Prix Marcel Boussac third Dabyah (Ire) (Sepoy {Aus}), who was instead switched to Saturday’s G3 Fred Darling S. at Newbury. Over-racing towards the stand’s-side rail initially with Dettori intent on maximising this educational opportunity, the bay soon settled with a lead from Kilmah (GB) (Sepoy {Aus}) and was one of a select few ready to make an impact as the 7-2 favourite Roly Poly (War Front) was the first of the main protagonists to issue distress signals. With the determined Unforgetable Filly refusing to allow the long-time leader Poet’s Vanity (GB) (Poet’s Voice {GB}) any peace and Sea of Grace (Ire) (Born To Sea {Ire}) and TDN Rising Star Pamplemousse (Ire) (Siyouni {Fr}) flattering to deceive, it was Daban who gave the most at the finish in what amounted to a highly promising display from such an inexperienced runner.

“I was expecting a good show from her,” Gosden commented. “She’s a sweet, lovely filly and is very relaxed at home. She does have that cruising speed and ability to quicken, which is what a good thoroughbred has. She has quickened up well and she’ll improve from that. She is in the Classic here and in France, so we will talk to the owner about which way he wants to play it. Dabyah has been to France and maybe this filly can come here and Dabyah can go to France. I asked Frankie whether she would stay the mile and he felt should would. I think the well-rated and fancied fillies disappointed early in the race and I do like the second and I was most impressed with the third when she won at Salisbury. I promise you it is easy to knock it, but I think they are talented fillies and lets see what the Fred Darling has and then as usual let’s see what turns up fresh on the day without a run. I think she is the kind of filly that in a race they will know if they go by her. She is tough and has got a great mind. There is no reason a filly like this won’t mentally improve as well as physically improve–she is the type of filly that could well be in the frame.”

Intriguingly, it was at this meeting 12 months ago that the winner’s half-brother Thikriyaat won a conditions event en route to annexing the G3 Thoroughbred S. and finishing runner-up in the G3 Jersey S. The dam is a half to Albisola (Ire) (Montjeu {Ire}), who captured the G3 Prix de Flore and was third in the G2 Prix de Sandringham, and also this stable’s G3 Prix Quincey winner and G1 Criterium International runner-up Johnny Barnes (Ire) (Acclamation {GB}). Among her other half-siblings are Bufera (Ire) (King’s Best), responsible for the Listed Prix la Sorellina scorer and G3 Prix Chloe and G3 Prix de Lieurey runner-up Chartreuse (Ire) (Lawman {Fr}), and Tonnara (Ire) (Linamix {Fr}) whose Ectot (GB) (Hurricane Run {Ire}) and Most Improved (Ire) were successful at the top level with the former taking the G1 Criterium International and GI Joe Hirsch Turf Classic and Most Improved registering his career-best in the G1 St. James’s Palace S. Also from the family of the sires Ivan Luis (Fr) and Stagelight (Ire), the Classic-placed Hathrah (Ire) (Linamix {Fr}) and her G1SP daughter Hadaatha (Ire) (Sea the Stars {Ire}), Malaspina also has a 2-year-old colt by Pour Moi (Ire) named Para Mio (Ire) and a yearling full-sister to Daban.