Zayat Stables hit it out of the park at the second session of the Ocala Breeders’ Sales Co.’s March sale of 2-year-olds in training, selling the sale-topping Congrats   filly for $1.7 million and a colt for $1 million. Those horses fueled a vibrant market that resulted in record gross and average prices for the two-day auction.

OBS sales director Tod Wojciechowski said there was a positive feeling going into the sale and the positive results afirmed that confidence level.

While the number of horses above the $500,000 level showed continued strength at the top of the market, Wojciechowski said there were also more horses sold within the middle price ranges.

“We got some horses sold in the middle,” he said. “I think we would all like to see the middle market robust and we strive for that.”

The sale topper-was purchased by agent Kerri Radcliffe from McKathan Bros., agent. Radcliffe, who was also active during the the Fasig-Tipton Gulfstream sale, was excited about the sale-topper, a daughter of WinStar stallion Congrats  .

“She’s beautiful,” said Radcliffe, who was the sale’s leading buyer with three horses purchased for $2,925,000. “She was the standout of the sale and I wanted her from the start. It’s hard. I didn’t think I was going to have to give that for her.”

Consigned as Hip 360, the filly breezed an eighth of a mile in :09 4/5, one of the more impressive pre-sale works.

“I knew she was the one I wanted from the time I saw her breeze,”  the agent said.

Radcliffe said the filly and her other purchases at OBS were on behalf of a new client she declined to identify. They will be trained by Bob Baffert, who accompanied the agent to the auction.

“She’s a queen,” Kevin McKathan said of the filly, noting that the sale-topper appeared on most top buyers’ radar screens following the under tack show. “Once she breezed as well as she did, she picked up momentum and everyone found her. You never know how they’re going to do, but it just felt like everyone was lined up on her.”

Bred in Kentucky by Todd Frederick, Chad Frederick, and Phoenix Farm and Racing, the filly was produced from the Dixie Union mare Azalea Belle, a daughter of grade 2 winner Westerly Breeze. She was bought by Zayat through agent Patrice Miller with EQB for $250,000 from Brookdale Sales at the 2016 Keeneland September yearling sale.

“It’s great when one you bought for $250,000 sells for that much,” said Justin Zayat, president and chief executive officer of racing and bloodstock for Zayat Stables. “After the breeze, they told me that she was going to do really well, but I was like, ‘I’ll believe it when I see it.’ “

Zayat’s other big score came with a Pioneerof the Nile   colt bought by Robert and Lawana Low for $1 million, the fifth highest price of the sale.

Consigned as Hip 586 by Eddie Woods—who was the leading consignor with 23 sold for $8.05 million—the colt from the extended female family of grade 1 winner Outwork   and grade 2 winner Cairo Prince   was purchased by Sobhy Sonbol for $240,000 from the Royal Oak Farm consignment to the 2015 Keeneland November sale.

“They love Pioneerof the Nile, like everybody,” said Jacob West, who represented the Lows at the sale. “He’s got a classic pedigree. He’s a lovely horse. The rest is up to God and (trainer) Todd Pletcher.”

Zayat, who bought back a Speightstown   colt for $600,000 and sold a Curlin   colt at a loss at OBS, said the outfit offers horses at public auction as part of their business plan.

“We loved all our horses in the sale and get emotionally attached, but we do not lose our business head,” Zayat said. “We hope they all win grade 1 races and the buyers come back for more.”

The Lows were active on both sides of the auction aisle Wednesday, selling a Tapit   filly they bred for $1.1 million. The filly (Hip 349), offered by Tom McCrocklin on behalf of the Lows, was bought by Lawrence Best’s OXO Equine. She was produced from the grade 2-placed Giant’s Causeway   mare Arienza, a daughter of Horse of the Year and three-time champion older mare Azeri.

The Tapit filly was one of two seven-figure 2-year-olds bought by Best from McCrocklin, as the former Boston Scientific executive went to $1.05 million to get an Arch colt (Hip 515). Out of the winning Forestry mare Enhancing, who is a daughter of champion and grade 1 producer Heavenly Prize, the colt was bought privately from breeder KatieRich Farms after failing to sell on a final bid of $110,000 at the Keeneland September yearling sale.

Best, who bought his first horses during the fall and purchased the Fasig-Tipton Gulfstream sale-topper, said both of his OBS purchases will be campaigned on the West Coast with Hall of Fame conditioner Jerry Hollendorfer. 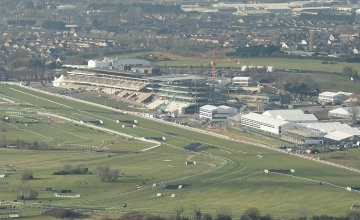 Good, good to soft in places at Cheltenham

CONDITIONS for day three of the Cheltenham Festival are described as good, good to soft in places after clerk of the course Simon Claisse and his team watered the track last night.

The feature race of the day is the Sun Bets Stayers’ Hurdle and Claisse said: “We’ve had a couple of days of temperatures reaching 14/15C and we just want to keep the ground on the easy side of good.

“We took the decision last night to put 10mm of water on and that has just eased the ground a little. I gave it as good, good to soft [on the Old course] yesterday and have left it there, but we’ve got rid of the good to firm that was in it when I went round last night.”

Claisse, speaking to Sky Sports News, added: “It feels cooler and the forecasts I’ve seen suggest the temperatures will barely get into double figures today, but I haven’t seen any rain in the forecasts for today or tomorrow.”

ITV will screen the first five races today, while the entire card will be on Racing UK.