Review: Winx makes it 15 on end

Winx, the world’s second highest-rated racehorse, has laid down a challenge for the No.1 position with a 15th successive victory.

Already the world’s best filly or mare and the best turf horse in training, Winx cruised to a two-length win in the G1 Chipping Norton Stakes at Randwick on Saturday.

It was a performance that would have been routine on a dry track, but on a surface softened by a day of persistent rain, her trainer Chris Waller admitted he had given thought to taking her out of the race.

But neither the track nor the opposition bothered Winx as she collected her 10th G1 victory and lifted her racetrack earnings to almost A$10-million with another totally dominant performance.

Winx settled in midfield, four lengths off the lead and with 700m to run, jockey Hugh Bowman allowed her to slide around the field and then run to the front at the 300m.

From there it was a procession as the daughter of Street Cry sliced the Randwick mud to easily hold the runner-up Lasqueti Spirit.

The Godolphin runner Magic Hurricane finished fourth, a nose behind Who Shot The Barman with Hartnell in eighth place after appearing uncomfortable in the going.

Waller said the pressure had affected him more than his horse.

“That was pretty special. It was different, completely different. That’s more pressure than I’ve felt since the early days,” Waller said.

Waller and the mare’s owners will then consider an international campaign which could include a series of European races.

Should she continue her winning run until the end of her Autumn campaign, Winx would close the already narrow gap between her and the world’s highest-ranked horse, Arrogate. There was no doubting the superiority of the mighty Winx (Aus) (Street Cry {Ire}) at a rain softened Randwick track on Saturday as she cruised home to her 15th successive win and her 10th at the top level. Hugh Bowman was content to sit four from the rear early on as 150/1 outsider Lasqueti Spirit (Aus) (Beneteau {Aus}) took them along throughout the 1600m contest. With 800m to run Bowman asked the mare to creep closer and she circled four wide around the field hitting the front on a tight rein 300m from home and finishing full of running for an emphatic success. Lasqueti Spirit kept on gamely to grab the second two lengths behind Winx with her stable-mate Who Shot Thebarman (NZ) (Yamanin Vital {NZ}), also a 150/1 chance, a further length back in third. The only anxious moments for connections and fans of Winx were felt in the lead up to the race as her trainer Chris Waller considered scratching the mare on account of the track which was beginning to show the affect of the persistent rain. “There is a bit of expectation with this horse and I didn’t want to see tomorrow’s newspaper if I didn’t run her,” explained Waller. “When I went and walked the track it was pretty good considering. I knew it was safe and that’s the most important thing.” Reflecting on the latest installment of the amazing journey that Winx is bringing those close to her on Waller told Racing.com, “I am so proud of her. She’s a beautiful mare. It’s a pretty amazing thing and to have the crowd behind her, it’s very special. I was just glad she was able to race and do that.”

Given the ease with which Winx was able to dispatch her opponents it is a testament to her ability when Hugh Bowman indicated that she is even better on a sounder surface. This versatility that enables her to reproduce her best form no matter the ground conditions is also a hallmark of brilliance. “I think she would have been comfortable if the track wasn’t as bad as it was. She got the job done – but she’s more effective on good ground,” said Bowman. “She’s a wonderful mare. Riding her is the easiest part to be honest. With her and her fame comes a lot of extra curricular activities – but when we’re both comfortable I enjoy it just as much as anyone else,” he added. The disappointments of the race were Godolphin’s Hartnell (GB) (Authorized {GB}) and Winx’s stablemate Endless Drama (Ire) (Lope De Vega {Ire}). Both were expected to keep the mare honest but they faded tamely in the straight finishing well adrift. Brenton Avdulla could offer no reason for Hartnell’s eighth place finish and said, ‘’I travelled three deep just outside them comfortably enough, he just didn’t find.’’

As has become the norm though this was all about Winx and true to form she did not let her owners and supporters down. All things being equal her next assignment will be the G1 George Ryder S. at Rosehill in three weeks time before she completes her autumn campaign in the 2000-metre A$4 million G1 Queen Elizabeth S. two weeks later.

Pedigree notes…
Street Cry (Ire) (Machieavellian)’s death at the age of 16 in 2014 was a huge blow not only to Darley but also to the global breeding industry. He has left a wonderful legacy in two of the finest race-mares this century in Zenyatta and Winx and it doesn’t look like Winx is about to be beaten any time soon. Her dam Vegas Showgirl (NZ) (Al Akbar {Aus}) was a smart filly in her own right but she has excelled as a broodmare with her only two offspring to reach the track so far from six foals also including El Divino (Aus) (Snitzel {Aus}), a group 3 winner at Randwick last year. Winx was bred by John Camilleri’s Fairway Thoroughbreds and although barren to Snitzel in 2015 Vegas Showgirl produced a filly by the same sire in 2016. 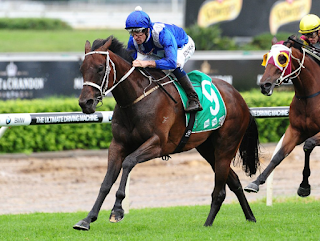