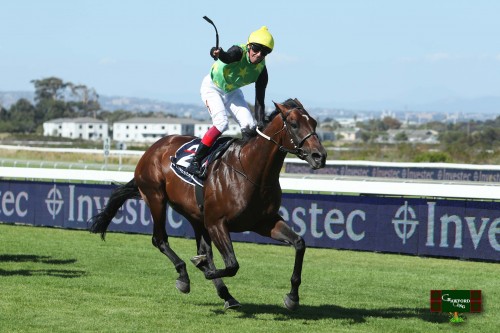 Edict Of Nantes with Frankie Dettori on board (Wayne Marks)

Former Klawervlei Farm Sale graduate Edict Of Nante made history at Kenilworth on Saturday when he lifted the G1 Investec Cape Derby under the urgings of three times British champion jockey Frankie Dettori.

It was Dettori’s greatest South African win thus far, and the charismatic rider thrilled the large Kenilworth crowd by providing his customary flying dismount after the win.

Edict Of Nantes, whose dam won only up to 1200m, has now won or placed in eight of ten outings and Saturday’s win pushed his earnings to over R900 000. The Mayfair Speculators owned Edict Of Nantes now looks a potential candidate for the G1 Vodacom Durban July later in the year.

He also joined a list of some of South Africa’s very best thoroughbreds in landing the Investec Cape Derby, with past Derby winners including the local legends Sea Cottage, Politician, Jay Peg and current outstanding sire Dynasty.

The colt, who is bred on the same Count Dubois/Jet Master cross exported G3 Three Troikas Stakes winner Madame Dubois (now in the care of Todd Pletcher),  is the fifth G1 winner sired by former Italian champion Count Dubois. A son of Zafonic, Count Dubois was Italy’s champion 2YO in 2000, when his wins included a score in the G1 Gran Criterium, and he also ran third to multiple G1 winner Nayef in that year’s Listed Autumn Stakes at Ascot. Since retiring to stud at Klawervlei, Count Dubois
has enjoyed plenty of success, with his runners include the Equus Champions Asylum Seeker and French Navy, Guineas winner Biarritz, and G1 winners Zaitoon and Zeeno. 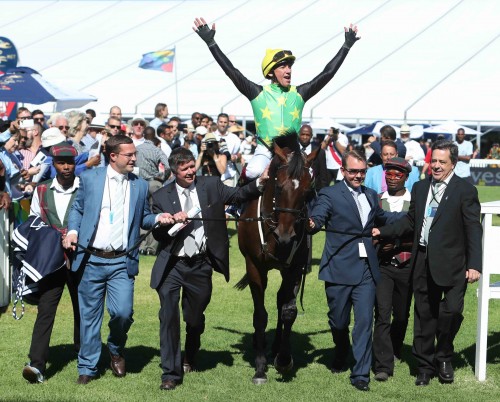 Edict Of Nantes’ success was also a feather in the cap of the Klawervlei Farm Sale (he was a R360 000 buy from the 2015 Farm Sale). Still a relatively new sale (it was first held in 2011), the Farm Sale has grown in size and popularity every year, with both the quality of horse on sale and number of buyers increasing annually.

The 2017 G1 Investec Cape Derby winner is, however, by no means the first notable horse to have emerged from this sale.

Former Equus Champion Sprinter Captain Of All, now standing alongside his sire Captain Al at Klawervlei, was a R100 000 bargain buy from the 2012 Farm Sale and he has proved a wonderful poster boy for the sale.

The Riverton Stud bred horse went on to prove himself one of the top sprinters around in 2015 (Captain Of All was rated the equal of US champion and G1 Breeders’ Cup Sprint hero Runhappy by Longines), when he won the G1 Golden Horse Casino Sprint (under 60kgs) and G1 Mercury Sprint –where he thrashed Horse Of The Year Legislate by over four and a half lengths.

Other impressive recent winners sold at past renewals of the Farm Sale include talented three-year-olds Apocalypse Now, Oracle Of Delphi and Pillar Of Hercules, while promising two-year-olds Barrack Street and Queen Moira are other promising former Klawervlei Farm Sale graduates.

Saturday’s Sun Met racemeeting at Kenilworth was a day to remember for Klawervlei. Currently well clear on the breeders’ log, Klawervlei were responsible for no fewer than three of the major features run on the day, with their outstanding resident sire  Captain Al responsible for an astonishing five winners on Saturday.

Owned by Mayfair Speculators, William Longsword (a half brother to G1 winning sprinter Real Princess) was a R2.2 million purchase from the 2015 Cape Premier Yearling Sale.

He was one of no fewer than three feature race winners on the day for his outstanding sire Captain Al, whose Bernard Kantor bred and owned 2yo daughter Call To Account lifted the first stakes win of her career when outgunning some top class juveniles to take the Listed Princess Charlene Of Monaco SA Foundation Summer Juvenile Stakes. (It was back to back wins in the Summer Juvenile for Captain Al –whose Sergeant Hardy had won the same race 12 months earlier). Trained by Joey Ramsden, Call To Account is third Captain Al sired juvenile to win this particular race. 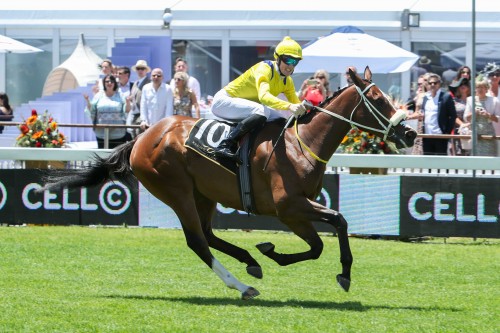 Captain Al’s daughter Carry On Alice (bred and part-owned by Klawervlei) provided her sire and breeder with yet another big race win when she landed the G1 Betting World Cape Flying Championship for champion trainer Sean Tarry, at the expense of outstanding speedsters Trip To Heaven and Red Ray, with Captain Al’s recent G2 CTS Southern Cross Stakes winning daughter Jo’s Bond back in fourth. This wonderful racemare, owned by Chris Van Niekerk, Dr John and Jill Warner in partnership with Klawervlei, has now won Grade One races at 2,3,4, and 5, and is without doubt a true champion! 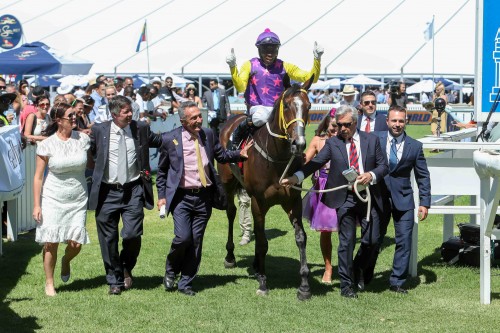 Klawervlei Farm Sale graduate Edict Of Nantes (he was a R360 000 buy from the 2015 Farm Sale) confirmed his class when lifting the G1 Investec Cape Derby (a race won previously by such legends as Sea Cottage, Politician, and Dynasty) beating some of the country’s top three-year-olds in the process. He also provided legendary jockey Frankie Dettori (whose numerous big race wins overseas include former Derby winners Authorized and Golden Horn) with his biggest South African win to date.

The Mayfair Speculators owned Edict Of Nantes, who provided Klawervlei’s highly successful sire Count Dubois with yet another top level victory, was yet another big race winner on the day for trainer Brett Crawford, who would go on to saddle Whisky Baron to victory in the G1 Sun Met. Hopefully Edict Of Nantes can go on to provide Brett and his owners with yet more G1 glory later on. Bred on the same Count Dubois/Jet Master cross as the very smart exported filly Madame Dubois, Edict Of Nantes pushed his earnings to over R900 000 with Saturday’s classic success.

The 2017 G1 Investec Cape Derby winner is the fifth G1 winner for Count Dubois, whose previous stars include champions Asylum Seeker and French Navy. He remains one of South Africa’s best value for money sires! 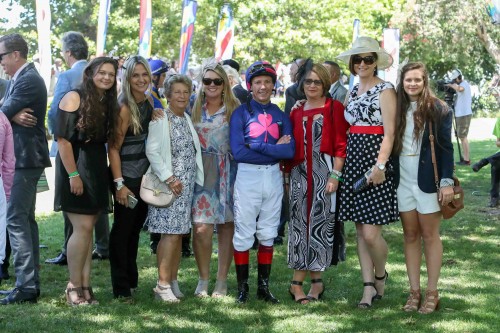 Klawervlei’s outstanding sire Captain Al dominated proceedings on Sun Met day on Saturday. The former champion sire, and eight times champion sire of 2yos, had no fewer than five winners on the day (and seven winners in total over the weekend), with Captain Al sired runners cleaning up in the Cape features.

Call To Account, who is bred and owned by Bernard Kantor, is the third Captain Al runner to lift the prestigious Summer Juvenile Stakes, a race won previously by such G1 winners as Sparkling Gem, Princess Victoria and Copper Parade. She was preceded by Only Emily and Sergeant Hardy respectively.

It was also back to back wins in the Summer Juvenile Stakes for Captain Al, whose subsequent G3 Cape Of Good Hope Nursery winning son Sergeant Hardy had won this race a year ago.

Call To Account, the 77th stakes winner for her sire, had been third, on debut, to another promising 2yo daughter of Captain Al in Princess Peach.  Her paternal half-brother Kasmir impressed when finishing second, on debut, in the Summer Juvenile Stakes and he looks more than capable of becoming yet another black type winning juvenile for Captain Al. 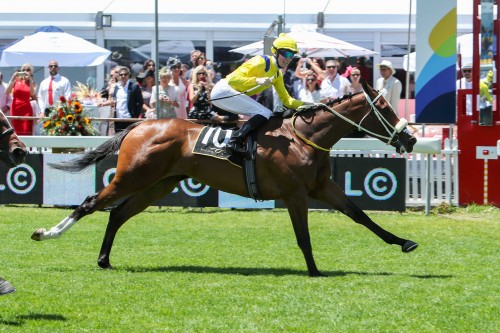 The champion’s next feature race win on the day came when his Klawervlei Stud bred and bound son William Longsword defeated a star studded field to lift the CTS Mile. Winner of the G1 Grand Parade Cape Guineas last time out, the handsome colt put a top class field to the sword as he skated clear to land the $500 000 contest by one and a half lengths for owners Mayfair Speculators and trainer Vaughan Marshall. Bred on the same Captain Al/Fort Wood cross as Sun Met third Captain America, William Longsword has now won six of just eight outings.

Captain Al’s great daughter Carry On Alice made it G1 win number four when she got the better of stable mate Trip To Heaven and G1 winner Red Ray to lift the G1 Betting World Cape Flying Championship –a race she was third in 12 months earlier. Bred (and part-owned) by Klawervlei, Carry On Alice has now won G1 races at 2,3,4, and 5, with her previous top level wins including the SA Nursery, City Of Pietermaritzburg Fillies Sprint and Computaform Sprint. Owned by Chris Van Niekerk, Dr John and Jill Warner, and Klawervlei Stud, Carry On Alice’s G1 win on Saturday pushed her earnings to over R3.9 million. 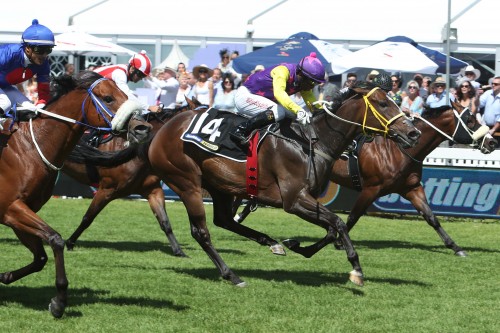 Captain Al was also represented by G1 Sun Met third Captain America and G1 Investec Cape Derby third Captain Gambler to put a cherry on what was a magnificent day for the son of Al Mufti.

The champion’s good form continued the great run of success that Captain Al’s progeny enjoyed at the recent Cape Premier Yearling Sale, where his yearlings fetched up to R4.5 million. 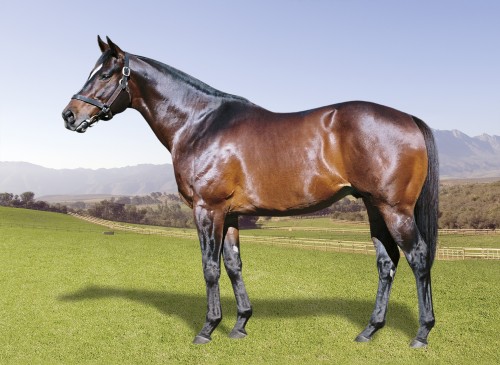