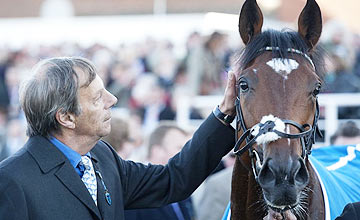 Frankel: ‘a horse of anyone’s lifetime’

In the second part of a series to celebrate the 10,000th edition of the Racing Post on Monday, Steve Dennis presents the horses who have lit up our lives during the last 30 years

Montjeu: demolished his rivals in the King George in 2000

The Japanese star El Condor Pasa held a long lead in the straight but Montjeu relentlessly cut back his advantage to prevail by half a length, with the third horse six lengths away.

The following year he won the King George in a manner so disdainful of his high-class rivals that it almost defied belief, and although his career ended relatively ingloriously at his peak he was practically unbeatable.

9 Dayjur
RPR 136
Comfortably the best sprinter of the last 50 years, this burly bullet of a horse did not demonstrate his true potential until dashing away with the 1990 King’s Stand Stakes at Royal Ascot.

His next run, the Nunthorpe Stakes at York, is a benchmark in the speed sphere – he led all the way, quickening two furlongs out off a headlong gallop to smash the course record by more than a second.

That record still stands. Success in the Sprint Cup and Prix de l’Abbaye embellished his legend; jawdropping defeat in the Breeders’ Cup Sprint enhanced it. 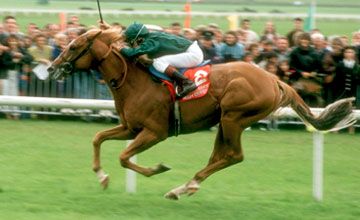 Generous: landed the Epsom Derby in 1991 by an emphatic five lengths

8 Generous
RPR 137
A 50-1 winner of the Dewhurst Stakes, the flashy flaxen-maned chestnut was generally underappreciated until the emphasis was placed upon his stamina, whereupon he embraced greatness.

Next time out he thrashed the brilliant Prix du Jockey-Club winner Suave Dancer in the Irish Derby, before putting his King George rivals to the sword to the tune of seven lengths – then a record for the race. 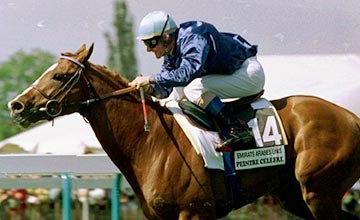 7 Peintre Celebre
RPR 137
The best French-trained horse of the last 50 years, his reputation was forged with a superlative performance in victory in the 1997 Prix de l’Arc de Triomphe, in which he moved powerfully through to lead approaching the final furlong before quickening right away from a strong field, beating six-time Group 1 winner Pilsudski by five lengths and breaking the course record.

His talent had been evident from success in the Prix du Jockey-Club and Grand Prix de Paris, but those wins had failed to prepare us for the true extent of his brilliance. Injury ended his career before he could run again. 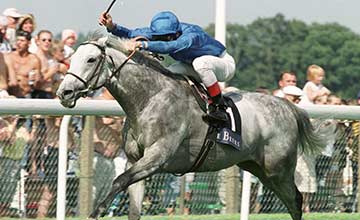 Daylami: particularly imperious when coming into his own at the age of five

6 Daylami
RPR 138
As tough and as durable as he was talented, the steadily whitening grey improved with age and distance following an early success in the 1997 Poule d’Essai des Poulains.

Further Group 1 laurels were elusive until he raced beyond a mile, winning the Eclipse Stakes and the Man O’War Stakes the following year, and he came gloriously into his own at the age of five, winning the Coronation Cup, the King George (five lengths) and the Irish Champion Stakes (an eased-down nine lengths) before crowning his season and his career with a comfortable success in the Breeders’ Cup Turf. 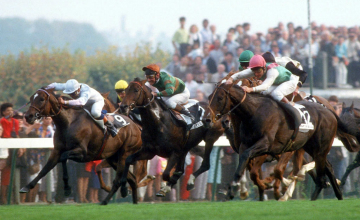 Dancing Brave: won the Arc under Pat Eddery in 1986

His celebrity rests primarily on a race he didn’t win – the Derby, in which he was a fast-finishing and horribly unlucky runner-up – and on a race he did win, the Prix de l’Arc de Triomphe.

At Longchamp, among one of the best fields ever assembled for the race, he challenged late and fast and wide to cut down his rivals in deathless fashion, his greatness condensed into an intoxicating final-furlong thrust. 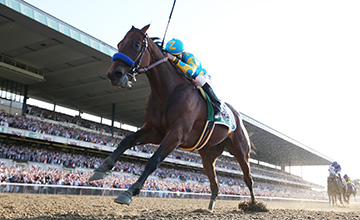 American Pharoah: captured the hearts of a nation in no uncertain terms

4 American Pharoah
RPR 138
After 37 years, he was worth the wait. The highest-rated horse trained outside Europe since 1988 became the first horse since Affirmed to carry the US Triple Crown with a series of remarkable victories, notably when making all to win the Preakness Stakes by seven lengths and the Belmont Stakes by five and a half.

His winning spree foundered at Saratoga but he bounced back better than ever, laying down beguiling fractions on the lead in the Breeders’ Cup Classic before staying on strongly down the stretch to close a thoroughly dominant career in typical style.

Sea The Stars: pictured winning the Derby in 2009

3 Sea The Stars
RPR 138
The greatest Irish-trained horse since Nijinsky, this son of phenomenal broodmare Urban Sea would surely have been rated higher still had any of his eight wins – from nine starts – been gained by a margin of more than two and a half lengths.

His unbeaten three-year-old campaign was a masterpiece of sustained excellence and deftly delivered brilliance encompassing six Group 1s – the 2009 2,000 Guineas, Derby, Eclipse, Juddmonte International and Irish Champion Stakes were followed by the Prix de l’Arc de Triomphe, in which he overcame traffic problems before striding away for a hugely acclaimed victory.

Dubai Millennium: only defeat came in the Derby in 1999

2 Dubai Millennium
RPR 139
Beaten just once in ten races, when lack of stamina found him out in the 1999 Derby, he matured into the apotheosis of Sheikh Mohammed’s Godolphin empire and two Group 1 wins at a mile at three were no more than a footnote to his imperious but sadly foreshortened four-year-old campaign.

Renamed (from Yaazer) to make an impact at Nad Al Sheba on World Cup night, he outstripped expectations with a powerful display of front-running, winning by six lengths.

The same tactics worked equally efficiently in the Prince of Wales’s Stakes (eight lengths) before injury denied him even greater glories. 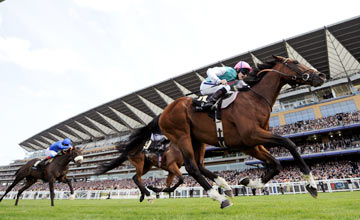 Frankel: King of the Flat performers in the last 30 years

1 Frankel
RPR 143
The best we’ve seen. Unbeaten in a three-season, 14-race career, he rose in the ratings above all-time greats such as Sea-Bird and Brigadier Gerard with performances of repeated magnificence.

Peerless at a mile, his finest hours coming when making all in bewitchingly merciless fashion to win the 2011 2,000 Guineas by six lengths and when sprinting away to win by a barely credible 11 lengths in the Queen Anne Stakes the following year, he moved up to ten furlongs for his last two outings and underlined his glorious invulnerability with emotionally-charged victories at York and Ascot.

“The horse of anyone’s lifetime”.