And the horses who’ll make it happen

But first, it’s your call…

Our Noms team will be delighted to discuss your mares and your wishes, and to help you with your questions.

Darley announces fees for its European roster in 2016

Pensierieparole provides Exceed And Excel with a Group race double 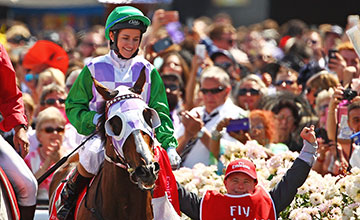 Michelle Payne celebrates a fairytale victory on Prince Of Penzance

MICHELLE PAYNE made history in the 155th Melbourne Cup by becoming the first female jockey to win Australia’s greatest race after steering 100-1 shot Prince Of Penzance to a famous victory.

Max Dynamite finished an excellent second for trainer Willie Mullins and Frankie Dettori, with Trip To Paris faring best of the British contingent in fourth.

Trip To Paris’s stablemate Red Cadeaux, three-time runner-up in the race, was pulled up near the winning post and later transferred to Werribee veterinary clinic where he has been stabilised and treated for a fetlock injury.

There was plenty of British and Irish interest at the finish – the Michael Bell-trained Big Orange grabbed fifth – but once Payne had found top gear on Prince Of Penzance a furlong out the fairytale victory was assured.

Payne, 30, said: “It’s unbelievable, it’s like a dream come true. This horse is awesome and Darren Weir is an unbelievable trainer to get him here like this today.

“He was in the best shape he could be in and I’m just so grateful to them [Weir’s team] and all of the owners.

“When I won on this horse as a three-year-old here, I thought this is a Melbourne Cup horse. He just felt like he would run the two miles strong but I didn’t think he’d be that strong. 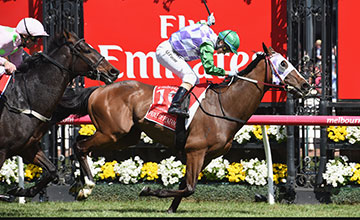 PICTURE: Getty Images
Payne is from a family steeped in racing history with her father Paddy a trainer and the majority of her nine siblings professional jockeys. The rider was raised by her father after her mother died in a motor vehicle accident when she was six months old.

She shares a flat with her brother Stevie, who has Down’s syndrome, and was quick to point out the role the strapper at Weir’s stable played in the poignant success.

“Stevie drawing the one was the key to this,” she said alluding to the fact that he drew the perfect gate at the race’s draw ceremony.

Later in her post-race interview, Payne took a swipe at the “chauvinistic” culture of racing. “It’s such a chauvinistic sport, a lot of the owners wanted to kick me off,” she said. “Everyone else can get stuffed [who] think women aren’t good enough.”

Dettori banned for a month

The post-race drama continued when Dettori was hit with a one-month suspension and AUS$20,000 fine for his ride on Melbourne Cup runner-up Max Dynamite after pleading guilty to careless riding.

After failing to get a clear run on the far rail down the home straight, Dettori switched his mount out and finished with a late rattle to push Prince Of Penzance all the way to the line.

Mullins: “It’s a great story and we had a terrific run. Probably not the luckiest but it’s a horse race and we’re very happy when everything is concerned. This lad can come back again.”

Pace ‘too slow’ for Trip To Paris

As the tempo finally increased turning in, the quartet were still at the head of affairs with Trip To Paris looking the biggest threat before getting swamped close home by Prince Of Penzance, Max Dynamite and Criterion in third.

Tommy Berry, who also rode Trip To Paris to finish second in the Caulfield Cup, said: “The pace was just too slow in the middle stages. He didn’t show the same turn of foot over the 3,200 metres but he went super and was unbelievable for the connections who couldn’t have dreamed of having a runner. Just an end-to-end gallop would have suited.”

Quest For More stuck on for ninth to the delight of trainer Roger Charlton, who said: “He ran incredibly well but his form was all there with Big Orange. We just got a bit short of space but he ran very well and wasn’t beaten far. The only place was to be handy and those at the back had no chance.”

Teddy Grimthorpe, racing manager to Snow Sky’s owner Khalid Abdullah, said: “Ryan got him into a super position but one horse just came across him in the straight and ruined his chance of being in the money. He wasn’t going well enough to win but up to that stage was running a hell of a race.”

Jamie Spencer’s ride on fifth-placed Big Orange also caught the attention of the Flemington stewards and the jockey was banned for 14 meetings.