Darley swoop to buy Australia’s half-brother. A DUBAWI half-brother to dual Derby winner Australia has been purchased by Sheikh Mohammed’s Darley operation in a private sale from Stanley House Stud. 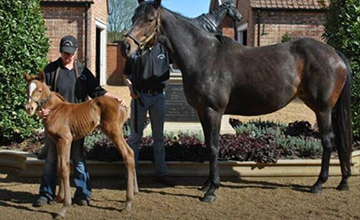 Australia with his mare Ouija Board

A  DUBAWI half-brother to dual Derby winner Australia has been purchased by Sheikh Mohammed’s Darley operation in a private sale from Stanley House Stud.

The commercial stallion policy of Coolmore means the yearling colt, being the product of a Darley stallion, would not have been considered to train alongside his illustrious sibling at Ballydoyle should he have passed through the sales ring this year.

However, it seems significant Sheikh Mohammed has acted so swiftly to acquire the son of outstanding racemare Ouija Board, whose Group 1 victories included a seven-length romp in the Oaks and two wins at the Breeders’ Cup. Ouija Board, a Lord Derby homebred and the flagbearer

for Stanley House, shot to prominence as a high-quality broodmare thanks to the exploits of Australia, while her profile was enhanced further when Our Voodoo Prince landed the Group 3 Easter Cup at Caulfield in April. Sheikh Mohammed will be hoping his most recent acquisition is another success story for Dubawi, who continues to figure prominently among the top European stallions. Peter Stanley, Lord Derby’s brother, believes the colt has the physical attributes to make his mark.

He said: “I can confirm the yearling half-brother to Australia by Dubawi has been sold privately to Darley Stud Management.

“He’s a quality horse and a different type to Australia, but that’s no surprise as Ouija Board hasn’t been stamping her stock. Dubawi looks like being a sensation as a stallion and we wish Sheikh Mohammed all the best with the colt.”

On whether the colt would have been sold at Tattersalls in October, he added: “We hadn’t totally made our minds up but it would have been a commercially sensible decision to sell as Australia has just won two Derbys.”