Macau Derby winner, Elderly Paradise, struck a blow for the internationals at the third Dubai World Cup Carnival on Thursday in an evening that was otherwise dominated by the home team of Godolphin, whose Sajjhaa claimed the Group 2 Cape Verdi.

Christophe Soumillon opened his 2013 account with a smooth success on the Man Chau Tam-trained galloper in a 2000m handicap. Tam who is no stranger to UAE success having saddled Change The Grange to win twice in 2005. “He did that very nicely,” said the handler. “He has got used to the track after his first start when he finished second and now everything depends on how he comes out of this race.”

Meanwhile the Godolphin team were in dominant form claiming the featured Group 2 Cape Verdi with a strong-running Sajjhaa.

At a meeting sponsored by The Meydan Group, trainer Saeed bin Suroor and jockey, Silvestre De Sousa combined to land a double, before Mahmoud Al Zarooni and Mickael Barzalona won the last to complete a Godolphin treble.

Pride of place went to Sajjhaa, who ran home the convincing winner of the 1600m turf feature restricted to fillies and mares with De Sousa in the saddle for Bin Suroor. Drawn widest of all in eight, De Sousa was happy to travel wide before going to the front early in the straight and the pair ran on strongly to defeat Amanee and 2012 winner First City.

“She is a nice mare who never runs a bad race and we thought she would be hard to beat as she had been working very well and has thrived in the Dubai weather,” said Bin Suroor. “We will be back in four weeks for the Balanchine Stakes.”

Masteroftherolls had initiated their double in the 1800m turf handicap after which De Sousa said: “That was a decent effort in what appeared a competitive race. We have made a bright start to the Carnival and the horses remain in good form.”

Mandaean was the third Godolphin winner, completing their clean sweep of the turf races when landing the 1600m handicap, the last race on the card, for Al Zarooni and Barzalona.

Local racing stalwart Satish Seemar and stable jockey Richard Mullen were also in double form with Reynaldothewizard leading close home in a 1200m conditions race on the all-weather. Ganas tried valiantly to lead all the way but had no answer to the late challenge of Mullen’s mount with Balmont Mast denying Ganas second in the dying strides.

The winner was wearing blinkers for the first time and Mullen explained: “We have always thought he could win a good race on the big stage and finally he has. He stays 1400m well so the fast gallop has helped and he stayed on well.

“We put blinkers on to try and sharpen him up after a lacklustre return and it has worked.”

Earlier Mullen had made virtually every yard on stable companion Bay Willow in a 2200m all-weather handicap which opened the card. It was a second consecutive victory for the 6 year old on whom Mullen employed similar tactics on their last outing over 2800m. The jockey said: “Nobody was keen to go on so I was happy to after his win from the front last time and I was happy to go for home from a long way out as stamina was certainly not an issue. It was a good win and he has been a revelation since employing these tactics.” 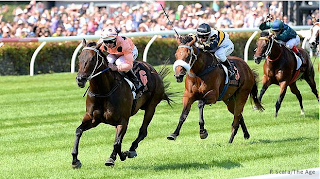 HURRICANE FLY: WILL FACE A MAXIMUM OF EIGHT RIVALS ON TUESDAY, 12 MARCH 2013, AT CHELTENHAM IN THE STAN JAMES CHAMPION HURDLE CHALLENGE TROPHY GRADE 1 (CLASS 1) (4YO+) 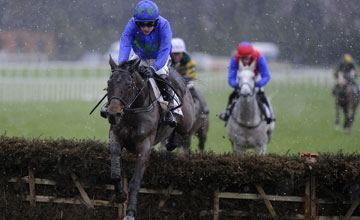 Hurricane Fly: will face a maximum of eight rivals in the Champion Hurdle

THE last three winners of the Stan James Champion Hurdle are set to do battle for the second year running, as a field of nine was declared on Sunday for Tuesday’s Championship race.

Last year’s winner Rock On Ruby, who will be sporting blinkers for the first time, takes on the vintage of 2011 and ante-post favourite Hurricane Fly, while 2010 winner Binocular will be the mount of AP McCoy.

Nicky Henderson is responsible for a third of the final declarations, as stablemates Khyber Kim and Grandouet will join Binocular, while Paul Nicholls relies on last year’s fifth Zarkandar.

Cinders And Ashes, Countrywide Flame and Balder Succes complete the field, while Cotton Mill, whose festival target is the Vincent O’Brien County Hurdle, was the only absentee.