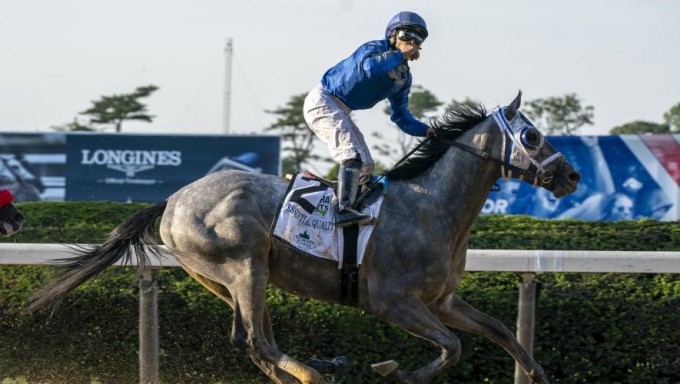 Essential Quality rebounded from his Kentucky Derby defeat as he outfought Hot Rod Charlie in a pulsating renewal of the G1 Belmont Stakes at Belmont Park, USA, on Saturday, 5 June.

The Champion juvenile of 2020, who was bumped at the start and endured a wide trip when fourth in the Run for the Roses, broke cleanly for Luis Saez and raced in fifth of the eight runners as Hot Rod Charlie and Rock Your World set strong fractions in front.

Essential Quality passed Rombauer to go a close fourth as the runners started to bunch at the half-way point before making a significant move on the outside of the field rounding the far turn.

Both horses battled bravely down the home stretch, with Essential Quality gaining a slight lead with a furlong to race before galloping out gamely, increasing his advantage to a length and a quarter at the line.

Godolphin USA President Jimmy Bell said: “Essential Quality has never run a bad race in his life and I think he met the test of a Champion today. To do what he did as a two-year-old and come through these races as a three-year-old and the mile and a half Classic is a great tribute to him.

“In all fairness, he probably ran as good a race as he has ever run in the Kentucky Derby. We all wish for a better trip but it wasn’t meant to be and that’s horseracing. We were just looking forward for an opportunity to showcase his talent and versatility. We are very happy that he got the job done for us today.

“What a tribute this is for Sheikh Mohammed. This represents his breeding and racing program. We are honoured to be part of it and it’s great to be on this stage representing him. It’s just a great day for the Godolphin team.”

Hugh Anderson, Godolphin Managing Director (UK and Dubai) said: “Winning G1 races of the quality of the Derby, the Just a Game Stakes and the Belmont Stakes is testament to the international strength in depth of Godolphin right now. It’s thrilling to be part of this team and wonderful to be able to repay the loyalty and devotion that His Highness Sheikh Mohammed shows to us. I’m ready to be proved wrong but I think this must be one of the best days in Godolphin’s history.”

Brad Cox said: “That was a long way round there going a mile and a half but it was exciting. I thought the pace benefited our horse. Hot Rod Charlie ran a tremendous race and I think we were in a good spot with the hot pace, where they would come back.

“Luis did a fantastic job of getting Essential Quality into position turning for home and he was able to really show his stamina late. It looked like Hot Rod Charlie still had running left, so I knew that it was going to be a battle down the lane. Right now, I think Essential Quality is the best three-year-old in the country. That was a tremendous race.

“I want to thank Sheikh Mohammed. He has been supporting us for the last two years and Godolphin is a tremendous organisation, a world-class organisation. We wouldn’t be here without this great horse and his support, so I really want to thank him.”

Luis Saez said: “We were so confident that we were going to win the Kentucky Derby. He was ready for that day but we had a little unlucky start and got bumped. Today, the main thing was trying to break clean and I knew that he was going to do the rest.

“I had a feeling about Essential Quality the first time I rode him. I have been riding a lot of good horses but when he won the Breeders’ Futurity pretty easily, I was excited. I know that he has a lot of talent and he was my first Breeders’ Cup winner, so he is more special than anything.” (fonte : Godolphin)

Seconds after cheering Essential Quality  to victory over Hot Rod Charlie  in the $1.5 million Belmont Stakes Presented by NYRA Bets (G1) June 5, trainer Brad Cox jubilantly walked to the winner’s circle with a microphone in his face and a phone pinned to his ear.

“This is unbelievable. This is what it’s all about—the classics. Obviously, it’s my first taste. Unbelievable,” he said before pausing to deliver a few words to his wife Livia on the other end of the phone.

“Congratulations. I love you,” Cox told her.

Still shaking with excitement, he continued, “It’s kind of like redemption, I guess you could say.”

It appeared that way. Godolphin’s homebred Essential Quality, the favorite for the Kentucky Derby Presented by Woodford Reserve (G1), entered the Run for the Roses as the leader in the division but left the race with his reputation somewhat tarnished after a fourth-place finish. But his one-length defeat, his first loss after five earlier victories, came with excuses. He broke poorly and raced wide, covering 68 more feet than first-across-the-wire finisher Medina Spirit , according to the data company Trakus.

Essential Quality, a Tapit   colt, was wide again Saturday at Belmont Park on the second of two turns, but in the 1 1/2-mile Test of the Champion, it wasn’t enough to stop last year’s champion 2-year-old male from winning. Taking command with a sweeping move in the final half-mile of the race, he poked his head in front of pacesetter Hot Rod Charlie after a mile and a quarter and put away that stubborn rival to win by 1 1/4 lengths.

The winner paid $4.60 as the favorite in the field of eight, the smallest field since American Pharoah   captured the 2015 Triple Crown over seven foes.

Winning rider Luis Saez dedicated the victory to his brother, Juan, a jockey who was killed in a riding accident at Indiana Grand in 2014.

“I had a lot of horse, and the good thing about Essential (Quality) is that he always fights,” Saez added. “He doesn’t care who it is; he’s going to want to beat them. So I knew he was going to show up at the top of the stretch.”

Though Hot Rod Charlie stalked the pace in the Derby, his jockey, Flavien Prat, chose a different tact Saturday, sending him to the lead. It came with a cost, a quick opening quarter-mile in :22.78 while under pressure from Runhappy Santa Anita Derby (G1) winner Rock Your World and France Go de Ina.

But the pace of the race moderated as the field was midway around the first of Belmont Park’s two sweeping turns. Hot Rod Charlie posted additional splits of :46.49, 1:12.07, and 1:37.40, and as Prat hoped, his mount was determined.

“It seemed like he was better on the lead—that he likes when horses come at him,” said Prat. “To be honest, it was the winner, me, and the rest of the field, way back there. I was really proud of him. He ran a great race.”

“I loved the confidence Flavien had in him. He had a nice clean trip. So no excuses,” he said. “The horse ran huge, and Essential Quality is a true champion.”

Essential Quality is now in contention—if not the front-runner—for another championship, this time as 3-year-old male. The Triple Crown races went to three different winners, putting him on equal footing from that standpoint, and he defeated the Preakness winner Saturday.

Neither the Bob Baffert-trained Medina Spirit, who is expected to be disqualified from the Derby pending a hearing after his post-race test results showed the presence of the corticosteroid betamethasone, nor second-under-the-wire Mandaloun , raced in the Belmont. The latter, owned by Juddmonte and trained by Cox, is in line to be elevated to first with a Medina Spirit disqualification.

Asked on national television by NBC’s Britney Eurton if he felt Essential Quality had reaffirmed his status as the best 3-year-old, Cox replied: “Right now I think he is. That was a tremendous race right there.”

“I just want to say what a tribute this is for Sheikh Mohammed,” said Godolphin USA president Jimmy Bell. “This represents his breeding and his racing program. We’re also honored to be a part of it, and it’s great to be on this stage representing him. Just a great day for the Godolphin team.”

Sheikh Mohammed, the ruler of Dubai, has been in the news this year for a non-racing matter, facing scrutiny for allegations that he has violated human rights while detaining one of his daughters against her will.

Essential Quality became the first Breeders Cup’ Juvenile winner to win the Belmont Stakes the following year. The Breeders’ Cup has been run annually since 1984.

He wasn’t the only horse that left his mark on Belmont history Saturday. So did Gainesway stallion Tapit, who sired his fourth Belmont Stakes winner, all within the last seven years. Tonalist   (2014), Creator  (2016), and Tapwrit   (2017) were his others.

“With the Tapit on top, we really thought he would get the mile and a half when given the opportunity,” said Cox, who optimistically called Essential Quality his “Belmont horse” beginning last summer after watching him train at Keeneland.

Saez joined Cox in winning his first Classic, having come closest previously with Bravazo  ’s second-place finish in the 2018 Preakness. Saez crossed the wire first in the 2019 Kentucky Derby aboard Maximum Security  , but his mount was disqualified for interference and placed 17th.

Bred in Kentucky by Godolphin, Essential Quality is the lone winner and the second starter of five foals from the grade 3-placed Elusive Quality  mare Delightful Quality . Among her younger foals, she has an Uncle Mo   2-year-old filly named Famed.

Attendance Saturday was 11,238 with reduced-capacity seating, following COVID-19 spacing protocols that did not ease in New York until recent weeks. Last year, there was no paid attendance with the onset of the pandemic.