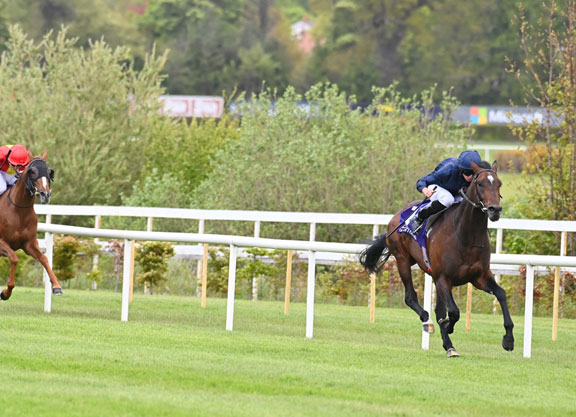 What had looked a match-up between Ballydoyle’s TDN Rising Star Bolshoi Ballet (Ire) (Galileo {Ire}) and Coolcullen’s returning G1 Futurity Trophy hero Mac Swiney (Ire) (New Approach {Ire}) in Sunday’s G3 Derrinstown Stud Derby Trial at Leopardstown proved anything but as the former produced a performance up with the best of his stable’s previous 13 winners. Leading the main group as Ryan Moore kept it simple, the even-money favourite who had taken the G3 Ballysax S. over this 10-furlong trip here Apr. 11 was sent past the Bolger pacemaker Wexford Soil (Ire) (Teofilo {Ire}) approaching three out. Kicking clear once straightened for home, the bay showed the kind of brilliance to make the bookmakers run for cover as the Epsom Derby market was re-shaped. At the line, Bolshoi Ballet had a commanding six-length gap to stablemate Lough Derg (Ire) (Galileo {Ire}) in an impressive time, with Fernando Vichi (Ire) (Australia {GB}) half a length back in third and a neck in front of the disappointing Mac Swiney. “He’s a very professional horse who was always travelling beautifully through the race,” Moore said. “He was very smooth and ticks a lot of boxes. He has improved from every run and is in a good place. It was a proper test today–it’s very windy and inexperienced horses are getting knocked around, so it’s hard to be too impressive but what he did was impressive enough. He has a super attitude and is a straightforward horse. That will stand him in good stead.”

It is 19 years since the Derby Trial winner went on to glory at Epsom, but there were shades of High Chaparral (Ire) about this display from a colt who had won his maiden by four lengths over a mile here in October eight days before finishing fifth in the G1 Criterium de Saint-Cloud. With the Ballysax protagonists Lough Derg and Taipan (Fr) (Frankel {GB}) beaten a lot further and Mac Swiney distanced, there is every suggestion that Bolshoi Ballet is a colt moving forward at a great rate and the setback to plans for High Definition (Ire) (Galileo {Ire}) suddenly seemed less of a problem after this. Whatever happens with that fellow TDN Rising Star from here until the first Saturday in June, Aidan O’Brien at least has one major player in the latest blue riband. “He’s very uncomplicated, relaxes, quickens and he doesn’t mind where he sits in a race,” he said. “We always loved him. He travelled to France last year to run on ground that we knew he wouldn’t like, but we wanted to travel him for experience. We couldn’t have asked for any more from him.”

“The plan was always to have these two runs and then on to Epsom and Billy Supple who looks after him was really happy with him–everyone was very happy with him at home,” the master of Ballydoyle added. “We wanted to teach him to really stretch today–when Ryan asked him to quicken he stuck his toe out and the race was over, so he let him coast home. He’s a lovely big horse, but very well-proportioned. He’s a close, compact horse with a lovely short back and a good pair of hips, a lovely head and lovely shoulder. He’s very well-balanced and his mind is great. He’s happy to make his own running and that’s a great trait. Everything has been falling lovely for him and the plan has been perfect for him so far, so hopefully he comes out of this well and has a nice run into the Derby.”