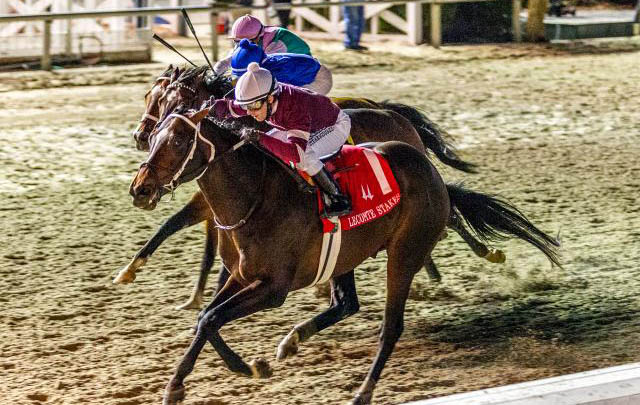 Midnight Bourbon made all the running in the $200,000 Lecomte Stakes (G3), leading wire-to-wire for Winchell Thoroughbreds and Steve Asmussen in the first of three Kentucky Derby qualifiers at Fair Grounds.

Ricardo Santana Jr. was up on the Tiznow colt, and Midnight Bourbon is a half-brother to Grade 1 winner Girvin, who captured the Louisiana Derby (G2) and Risen Star S. (G2) at Fair Grounds in 2017.

Previously unbeaten Mandaloun was in position to challenge in upper stretch but lacked the necessary rally, finishing third as the 3-5 favorite in his stakes debut.

Midnight Bourbon, who left the starting gate as the 7-2 second choice, sped to the front at the break and led by about a length through fractions in :24.68, :48.99, and 1:13.57. After accelerating to a two-length advantage in upper stretch, he comfortably held to the wire, scoring by a length.

Proxy stalked in second during the early stages at 8-1 odds. After being passed in deep stretch by Mandaloun, Proxy re-rallied to get second by a head on the wire. Mandaloun took third by 8 3/4 lengths over Santa Cruiser. Arabian Prince, Game Day Plan, Regular Guy, and Red N Wild came next under the wire.

Runner-up in the Iroquois S. (G3) at Churchill Downs and third in the Champagne S. (G1) at Belmont Park in his final two appearances last year, Midnight Bourbon has now earned 15 points toward a berth in the May 1 Kentucky Derby (G1). He impressively captured his second start at Ellis Park, and the sophomore increased his bankroll to $221,420 from a 5-2-1-2 record.

Bred in Kentucky by Stonestreet Farm, Midnight Bourbon was purchased for $525,000 at the 2019 Keeneland September Yearling sale. His dam, Catch the Moon, is a daughter of Malibu Moon, the sire of 2013 Kentucky Derby winner Orb. Midnight Bourbon also counts Grade 3 winners Cocked and Loaded and Pirate’s Punch as half-brothers.