Well back in midpack passing the winning post for the first time as Babbitt (Jpn) (Nakayama Festa {Jpn}) led, the grey filly started to advance during the backstretch run. Still well off the fence, Chrono Genesis continued to make inroads towards the vanguard and was within a length of new leader Fierement close home, before matching strides with that foe and asserting for a narrow victory. Salacia also showed good late dash to nip Fierement for second. In her final race, Lucky Lilac plugged on to take fourth. Blast Onepiece (Jpn) (Harbinger {GB}) went amiss on the backstretch and did not finish the race.

“All I wanted was her to be relaxed and her break wasn’t that bad, she was in hand and ran in the same rhythm as before,” said pilot Yuichi Kitamura. “Yesterday and today, I was in 2500-metre races here at Nakayama which enabled me to get warmed up with a good idea of how I wanted her to run. We haven’t faced the two Triple Crown winners yet, but I hope she performs well and stays in the spotlight next season.”

Added trainer Takashi Saito, “She was in good form and gave us a great impression before the race. I was worried that Yuichi might have made a too early bid, but he was confident and rode her beautifully, holding off the others. This is a dream come true and I have a feeling there will be many more.”

Runner-up in the 2018 G1 Hanshin Juvenile Fillies after two unbeaten runs including the Listed Ivy S., Chrono Genesis captured the G3 Daily Hai Queen Cup last term and was third in both the G1 Japanese 1000 Guineas and G1 Japanese Oaks before a win in the G1 Shuka Sho. Unplaced in her 3-year-old finale in the G1 Queen Elizabeth II Cup last November, she returned at four with a win in the G2 Kyoto Kinen and played bridesmaid in Lucky Lilac’s Osaka Hai in April. Back on top in the G1 Takarazuka Kinen on June 28, she went missing until a third in the G1 Tenno Sho (Autumn) behind Almond Eye (Jpn) (Lord Kanaloa {Jpn}) on Nov. 1 last out.

One of two Group 1 winners for her sire after Big Week (Jpn), the winner is among Bago’s 11 black-type winners, seven at the group level. The eighth foal and eighth winner out of the winning Chronologist, Chrono Genesis is also her dam’s second offspring to win at least two Group 1s after the grey mare Normcore (Jpn) (Harbinger {GB}). At the beginning of December, the grey Normcore padded her resume with a win at Sha Tin in the G1 Longines Hong Kong Cup after saluting in the G1 Victoria Mile earlier in her career. The duo are followed by the unplaced 3-year-old filly Clotho Nona (Jpn) (Rulership {Jpn}), an unnamed juvenile colt by Maurice (Jpn), a yearling by Drefong and a weanling filly by Maurice. Chronologist visited the court of 2017 G1 Japanese Derby/Tenno Sho (Autumn) hero Rey de Oro (Jpn) (King Kamehameha {Jpn}) this spring.

*Rating is based on HRN fan votes, which rank the Top Active Horses in training.
fonte : horseracingnation. com
Pegasus World Cup: Launched in 2017 as part of The Stronach Group’s mission to excite, energize and modernize the sport of racing for a new generation of fans, the Pegasus World Cup also provides lucrative opportunities for Thoroughbred owners and trainers. In just three short years, it has captured the attention of the racing industry, celebrities and fans from around the world and has established itself as a premier event on the racing calendar featuring some of the finest domestic and international runners.
2020 Winner: Mucho Gusto… 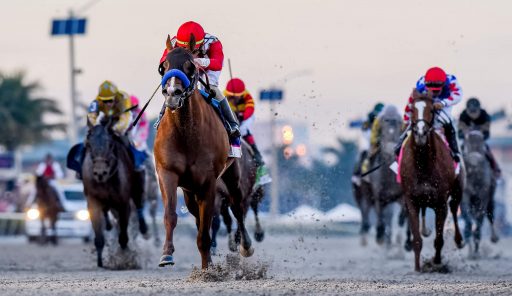