In the absence of Palace Pier (GB) (Kingman {GB}), Kameko (Kitten’s Joy) and the retired Mohaather (GB) (Showcasing {GB}), Sunday’s G1 Prix du Moulin de Longchamp boasted almost everything else that still held some claim to elevated status in the mile category and it was TDN Rising Star Persian King (Ire) (Kingman {GB}) who emerged supreme. Long deemed more than capable of a performance such as this, Godolphin SNC and Ballymore Thoroughbred Ltd’s imposing specimen just needed things to fall right and with conditions in his favour and an ideal target horse in Circus Maximus (Ire) (Galileo {Ire}) it was all set up ideally here. Sunk in the heavy ground when fourth behind Palace Pier in the G1 Prix Jacques le Marois at Deauville Aug. 16, the 18-5 second favourite who is unbeaten at this track tanked along with relish in the hands of Pierre-Charles Boudot in a close second with the rest detached throughout the early stages. Left in front two out, the 4-year-old was in total control from there with the winning margin eventually narrowed to 1 3/4 lengths by the sole closer Pinatubo (Ire) (Shamardal), as Circus Maximus faded to be six lengths behind in third. “Persian King’s victory was expected, to be fair. I don’t want to play the genius, but I was very confident because I could train him properly for the first time,” Andre Fabre said. “The surfaces were better than in August and it was less warm, so I could train him harder.”

Sporting these same Ballymore silks as a juvenile, Persian King registered a brace of conditions wins at Chantilly by a cumulative margin of 11 lengths before denying Magna Grecia (Ire) (Invincible Spirit {Ire}) by a neck, with Circus Maximus three lengths away, in a strong renewal of the G3 Autumn S. at Newmarket. Bought into by Godolphin, he reappeared to take the course-and-distance G3 Prix de Fontainebleau on fast ground in race-record time last April before securing the expected Classic victory in contrasting testing conditions in the G1 Poule d’Essai des Poulains also over this track and trip the following month. Denied the Poulains-G1 Prix du Jockey Club double by Sottsass (Fr) (Siyouni {Fr}) at Chantilly last June, the bay sustained an injury there which kept him off the track until racing’s resumption in 2020. Turned over by the subsequent Listed Gala S.-winning stablemate Magny Cours (Medaglia d’Oro) in the Listed Prix de Montretout over a mile back at Chantilly June 10, he built on that comeback effort to beat Pretreville (Fr) (Acclamation {GB}) and Skalleti (Fr) (Kendargent {Fr}) in G2 Prix du Muguet at Saint-Cloud June 28.

Moving back beyond a mile for only the second time in the nine-furlong G1 Prix d’Ispahan at Chantilly July 19, he made light work of dispatching of the veteran Stormy Antarctic (GB) (Stormy Atlantic) there but was out of the first two for the first time in his career in the Marois on Deauville’s sapping ground. Coming forward from that slog rather than it setting him back, Persian King was able to sit on the tail of the aggressively-ridden Circus Maximus with ease as the remaining quartet found themselves adrift. Siskin (First Defence) had become worked up in the stalls as he did in the G1 Middle Park S. last term and was awkwardly away, while Persian King’s year-younger stablemate Victor Ludorum (Ire) (Shamardal) again blew the start as he had in the G1 Prix du Jockey Club. Pinatubo and last year’s runner-up Romanised (Ire) (Holy Roman Emperor {Ire}) made up the four that were separated from the front duo, but none of their jockeys could be accused of giving them too much to do as there were no visual signs that they were under restraint.

Last year’s hero Circus Maximus was probably striding on a touch too energetically for the first half of the contest, but with no other pace available in the line-up Ryan Moore had understandably opted to grasp the nettle. Unfortunately for that triple group 1 winner, he was being utilised as a lead horse by Boudot whose every body signal throughout suggested the race was wrapped up even before they turned for home with that comfortable gap still intact to the chasing pack. Letting Persian King rip as soon as he felt the Ballydoyle challenger under stress, the considerable talent Boudot had judged the race to perfection as he so often does and as eyecatching and reaffirming as Pinatubo’s customary determined charge was, it was never going to be enough.

Andre Fabre is looking at stepping the winner back up in trip and, surprisingly, was not ruling out a tilt at the G1 Prix de l’Arc de Triomphe back here in four weeks’ time. “You can blame the ground for his below-par performance in the Jacques le Marois and the best horse on the day won today,” he said. “He’s entered in [G1] Champion S. and the Arc and all is possible. We have different options and I think he can step back up in distance, so we will see closer to the time which way we go. I don’t know if a mile and a half would be better, as there is obviously a question mark over the distance.”

Charlie Appleby said of the runner-up, “Pinatubo has run another solid race and seen the mile out. We will see how he comes out of the race and discuss it with connections, but I think the plan will be to come back to Longchamp for the [G1] Prix de la Foret and then hopefully on to the Breeders’ Cup Mile.” The Niarchos Family’s Alan Cooper said of Circus Maximus, “We have no complaints, he’s run a very good race and we’ll take him back home and see what Aidan wants to do with him. I suppose there are only two options now, the [G1] Queen Elizabeth II Stakes or the Breeders’ Cup Mile.” Siskin’s jockey Colin Keane commented, He ran well and to the pound of his Sussex form if you compare with Circus Maximus. It wasn’t an ideal race, as I was left in no mans’ land in front of the main pack.” 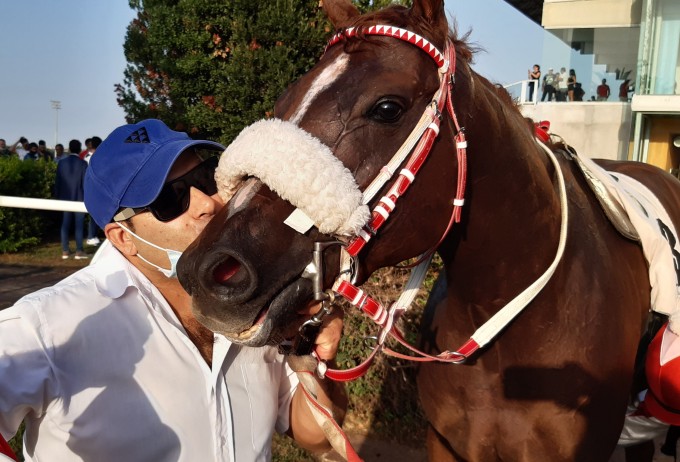