Fancy Blue (Ire) (Deep Impact {Jpn}), fresh from a thrilling victory in Chantilly’s G1 Prix de Diane earlier this month, doubled up in battling fashion and continued to lead the way for the freshman stable of Donnacha O’Brien with a second Group 1 success in Thursday’s G1 Qatar Nassau S. at Goodwood. Accepting a tow from Aidan O’Brien trainee and G1 Mackinnon S. victress Magic Wand (Ire) (Galileo {Ire}) into the straight, the 11-4 chance inched closer to launch her challenge at the quarter-mile marker and was driven out once taking control soon after to withstand the late charge of last month’s G3 Blue Wind S. victress One Voice (Ire) (Poet’s Voice {GB}) by a neck, providing Ryan Moore with a 50th Goodwood festival success. Nazeef (GB) (Invincible Spirit {Ire}) finished a further 2 3/4 lengths adrift in third. “That was a lovely performance from Fancy Blue, she is unbelievable and it is massive as you never believe you will get one like her in your first year of training,” said conditioner Donnacha O’Brien. “When you have the pedigrees that Coolmore have, you always have a chance and I am very lucky. I was given Fancy Blue as a yearling and you don’t really expect these kind of things, but when they come along it is more unlikely that the majority will be up to this sort of Group 1 class. You do right by them so that they will fulfil their full potential and thankfully she has reached that class. It is unbelievable that I get a filly like her in my first year. People go a lifetime without getting a filly like her and I am no under no illusions as to how lucky I am, and I just need to do the best I can with her. I was looking after her as a yearling and I was responsible for her, but I didn’t have my licence so she was not under my name.”

The homebred bay was unbeaten in two juvenile outings for Aidan O’Brien, backing up a Naas debut success with victory in The Curragh’s Listed Staffordstown Stud S., and her first official start for O’Brien junior was a runner-up finish to Peaceful (Ire) (Galileo {Ire}) in the G1 Irish 1000 Guineas on seasonal debut before turning the tables on that former stablemate at Chantilly last time. “I was hopeful of a good performance due to the weight she was getting [from the older fillies], and this race fitted in well after her win in the French Oaks,” O’Brien commented. “Every race she has won she has had to battle for and work for it. Jessie [Harrington]’s filly [One Voice] came at her today and if she had got into a proper battle with her, I think she would have found more. She is a very tough, high-class filly who has shown how good she is today. We came here today unsure as to what she would think of the ground. I was speaking to Dad during the race that she was swapping and changing her lead leg coming down the hill. She didn’t look particularly comfortable and I think a little bit of juice in the ground won’t be any harm for her in the future.”

Looking ahead to targets over a variety of distances, the rookie trainer revealed an extensive agenda. “We will give her a little break now as she has had a busy start to the year,” he announced. “We might look at Irish Champions Weekend to bring her back and that could be in the [G1] Matron [over one mile at Leopardstown], which I know is back down in trip, or in the [G1] Irish Champion [over 10 furlongs]. She’ll then go to Arc weekend where she has the option of the [G1] Prix de l’Opera [over 10 furlongs] or the Arc itself. After that, it will probably be the Breeders’ Cup or a trip to Japan for the Queen Elizabeth, where there is big money on offer over a mile-and-three and a bonus for winning the Prix de Diane. We’re not really sure what is going on with America at the minute, but they are the options. All the people in Japan are massive supporters of racing and I know myself from riding Saxon Warrior, and him being by Deep Impact, that we got a good following from the Japanese fans. It is always somewhere I have wanted to go and, whilst it is not set in stone, she could go there. Arc weekend fits nicely so whether it is the Opera or the Arc, we will sit down and speak with the owners. Taking in the [G1 Prix] Vermeille [over 12 furlongs] could maybe be a possibility, but we will have to see. There are a lot of good races around and I think she would be competitive anywhere from a mile to a mile-and-a-half. With her allowance in the Arc, I wouldn’t be writing her off either so we’ll have to see how strong the Opera is. Coolmore could have Love for the Arc too so nothing is set in stone.” 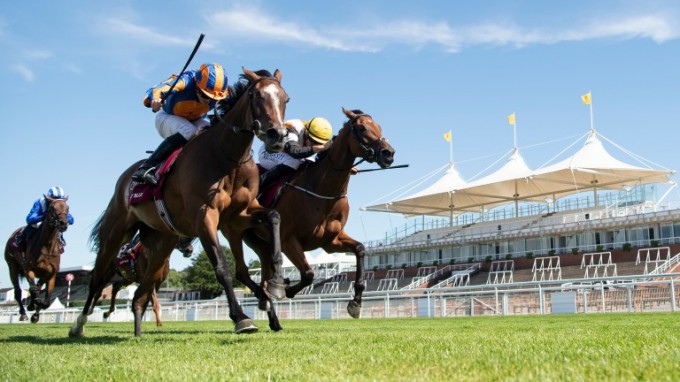 Anyone who thinks Aidan O’Brien is simply keeping the Ballydoyle seat warm for his youngest son, Donnacha, was given visible evidence to support the claim following a Glorious Goodwood showpiece in which two outstanding young talents, one a man, the other a horse, combined for a famous triumph.

Just 30 minutes after Aidan took part in a Zoom press conference in a Ballydoyle room now familiar to racing fans all around the world, Donnacha was sat in the same chair in the same room, explaining how it felt to win the Qatar Nassau Stakes.

Never before had the 22-year-old sent a horse to race in Britain but nor had he ever won a Classic as a trainer until Fancy Blue carried Michael Tabor’s silks to capture the Prix de Diane earlier this month. She did her trainer proud at Chantilly and did so again in the hands of Ryan Moore at Goodwood.

In a short but stunning riding career, O’Brien plundered a host of crown jewels, including back-to-back 2,000 Guineas, the Oaks, Irish Derby and Champion Stakes. That latter success was achieved aboard Magical at Ascot in October. Six days earlier he had also trained Fancy Blue to win her second career start – albeit unofficially. 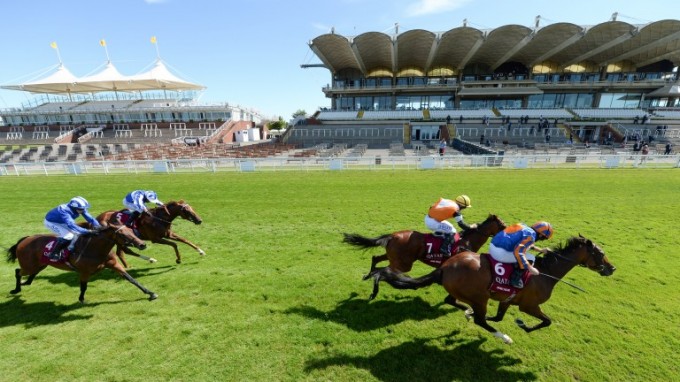 Knowing where and when to dish out praise out in this story is complicated, for when Fancy Blue took that Curragh contest she was ridden by Seamie Heffernan and officially trained by Aidan O’Brien, although actually in the care of Donnacha O’Brien, who on that occasion finished second for brother Joseph O’Brien on A New Dawn.

The sun was then setting on his riding career but dawn has risen magnificently on his career as a licensed trainer, one who was happy to talk about Fancy Blue potentially meeting his father’s Love in the Prix de l’Arc de Triomphe.

Due to quarantine requirements in Ireland, Donnacha was missing from France on Diane day and he was missing from Britain on Nassau day. That in no way diminished his joy, nor the smile on his face as he spoke from the seat in which his father had not long since been analysing Mogul’s Gordon Stakes win.

“It’s a bit weird but it’s a weird world at the minute,” said O’Brien. “If you had told me what was going on now in the world I wouldn’t have believed you. Everything is a bit strange, and I certainly wasn’t expecting this, but we’ll take it.” 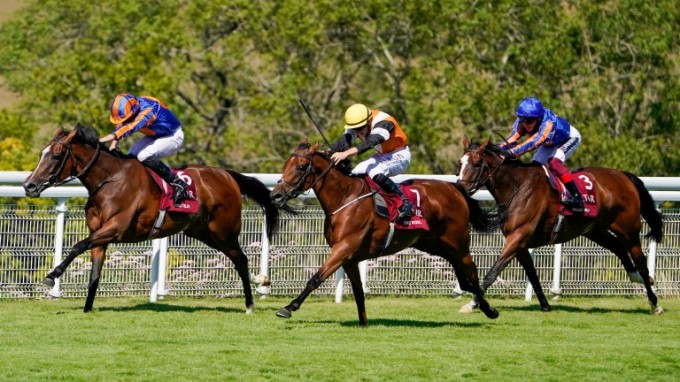 One Voice chases Fancy Blue but to no avail / Alan Crowhurst

It was clear, though, that he was expecting Fancy Blue to go close here. A filly whose only defeat came at the hands of Ballydoyle’s Peaceful in the Irish 1,000 Guineas sat second behind Ballydoyle’s Magic Wand – sent off 9-4 favourite – until grabbing the lead over a furlong from home.

Compatriot One Voice threw down a challenge but 11-4 shot Fancy Blue was always in command and scored by a snug neck.

Nazeef ran on for third – John Gosden argued the track was her undoing – but Japan’s Deirdre, the heroine of 2019, was this time at the other end of the result. It may have been some consolation that Fancy Blue was sired by Japan’s late stallion sensation Deep Impact, while she herself could be considered for a valuable prize in Japan at the end of the season.

THE GREAT DAYS OF DONNACHA

“I got her as a yearling but you don’t expect these kind of things,” explained O’Brien. “I was looking after her and I was responsible for her but she was under Dad’s name. I didn’t have my licence but she was with me and the yard was a satellite yard.

“It’s unbelievable to get a filly like this in my first year. People go lifetimes without getting anything like her. I’m under no illusions as to how lucky I am. I just have to do the best I can with her now we have her.”

His best is proving more than good enough. So is Fancy Blue’s. She will next head to the Irish Champion Stakes or Matron Stakes but thereafter a crack at the Arc is a possibility. 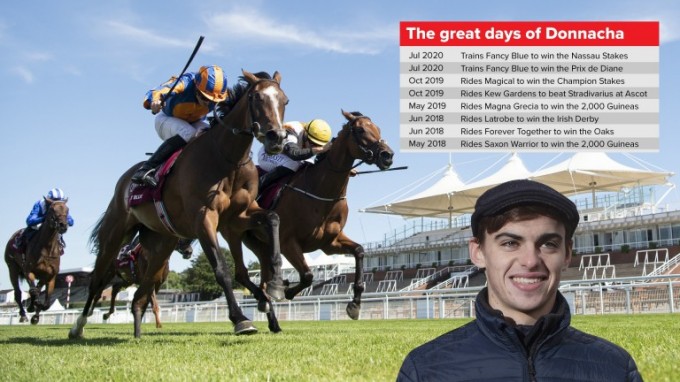 “With a filly’s allowance in the Arc I wouldn’t be writing her off,” insisted O’Brien. “Love has run to a higher rating but my filly has already showed in France that she is suited to that style of racing. She relaxes and has that kind of ‘scoopy’ action that allows her to quicken.

“Although she might not have been as impressive as Love I think she has shown attributes that maybe Love hasn’t just yet.”

Donnacha O’Brien’s attributes as a trainer are becoming increasingly obvious – he even sounds as unassuming as his father.

“When you’re riding you’re nearly thinking of yourself,” he said. “When you’re training I feel pressure for the guys who are working with her in the yard every day. You want her to achieve her best for them.”

So far, so very good on that front. (by RacingPost)