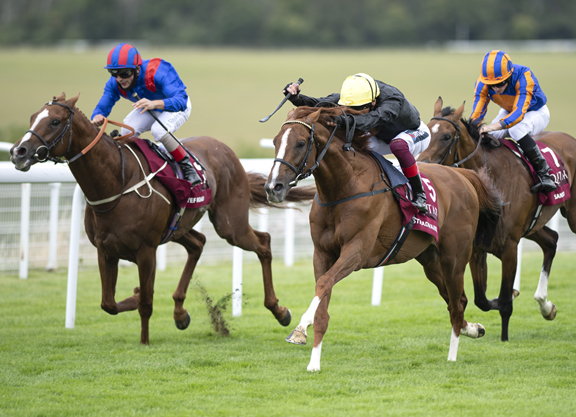 There was a degree of worry and stress for the connections and abundant fans of Stradivarius (Ire) (Sea the Stars {Ire}) to endure during Tuesday’s G1 Al Shaqab Goodwood Cup, but ultimately it was the familiar outcome as Bjorn Nielsen’s chestnut wrought a fourth victory in this historic prize. Momentarily pinned behind Nayef Road (Ire) (Galileo {Ire}) and Santiago (Ire) (Authorized {Ire}) inside the last two furlongs, the 4-7 favourite had to make his own racing room as the last furlong neared but by now there seems very little that he is incapable of. Picking up to overhaul them in the final 100 yards, he again dominated the climax of yet another top staying prize to step closer to immortality. Despite the tense nature of the preceding moments, there was a comfortable air to his length verdict over the long-time leader Nayef Road, while the G1 Irish Derby hero Santiago was unable to capitalise on his 15-pound weight-for-age concession 1 1/4 lengths behind in third. With this latest momentous achievement under his belt, the ever-composed Stradivarius now heads down a very different route with the G1 Prix de l’Arc de Triomphe in the owner-breeder’s and trainer’s sights. “We talked about this a year ago and John [Gosden] said if he stays healthy we’ll train him for the Arc,” Nielsen commented. “There is no [Weatherbys Hamilton £1million] bonus this time and he can have six weeks off now and probably go for the [G2 Prix] Foy three weeks before the Arc. Unfortunately, we won’t have our jockey so we’ll have to find a substitute.”

These staying races are fast regaining their prior glory and there are few who would deny that Stradivarius now sits alongside the revered staying greats such as Sagaro (GB), Ardross (Ire) and Yeats (Ire). Nielsen was typically humble when asked for his opinion. “That’s for other people to decide, but I think he deserves to be in the conversation,” he said. “They are rare horses and it’s amazing that he turned up on my doorstep–there is a lot of luck involved.”

Much water has passed under the bridge since Stradivarius played the role of young upstart when denying the dual Goodwood Cup hero Big Orange (GB) (Duke of Marmalade {Ire}) his own landmark in the 2017 edition of this race. Since that first top-level success, which was followed by a third placing in a strong renewal of the G1 St Leger, he has garnered two £1million Weatherbys Hamilton bonuses and dealt with a list of classy performers in this division including Vazirabad (Fr) (Manduro {Ger}), Torcedor (Ire) (Fastnet Rock {Aus}), Order of St George (Ire) (Galileo {Ire}), Dee Ex Bee (GB) (Farhh {GB}) and Cross Counter (GB) (Teofilo {Ire}). Like his stable’s leading lady Enable (GB) (Nathaniel {Ire}), he seems to have an insatiable appetite for prestige events which shows no sign of diminishing.

Sticking to the inside up the straight as the expertly-ridden Nayef Road set down to see off all-comers, Frankie was going best passing two out but was being leaned on by Eagles By Day (Ire) (Sea the Stars {Ire}) which kept him a pocket. As Santiago took on the Mark Johnston front-runner, Ballydoyle’s 3-year-old may have been briefly ahead but Silvestre de Sousa conjured more from Nayef Road to re-assert. Stradivarius had meanwhile muscled his way out into the clear and when he needed his trademark acceleration to overwhelm that duo it was as potent as ever.

Just as he had in 2019, Dettori was revelling in completing a high-profile double in less than a week, supplementing the high he experienced on Saturday with Enable. “What a horse. He’s given 15 pounds away, everyone rode to beat me and he still gets out and wins,” he commented. “He’s an amazing horse and well done to Bjorn Nielsen. I go from a superstar mare in Enable to this champion horse in three days. It’s the stuff of dreams. I just had to be patient and when you have good horses the gap will come. I’ve been in that position before and it’s not nice to be there, but we got out.”

“Obviously, I thought the biggest danger was Santiago, so I was trying to get behind him. I thought, with a 15-pound weight spread, he would try to make the most of it and probably make it a true test from four out but it turned into a two-furlong sprint,” he added. “For a minute I was boxed in, but if you want to sprint with Stradivarius you’ve got to be pretty good. For a furlong he took a little bit of organising, then he was amazing–he can put two lengths on any horse in a furlong. It’s amazing for a stayer. I really did not expect the race to turn out like that, only sprinting for two furlongs. He’s so good and so versatile, he can get me out of trouble. I’m still floating from the King George, so I have to pinch myself that this is actually happening. To do it again this year is amazing.”

John Gosden said, “The key thing when you’re tracking a horse like Santiago, who is in receipt of 15 pounds, is not to attack two and a half to three furlongs down and turn it into a real slog. Nayef Road ran a blinder again right beside us and I think it was right to wait. When he hits the front now, he thinks that’s it. It was a great performance under that weight. He has a great heart, is very cool and relaxed. Mr Neilsen and I have discussed it and he will run in the Prix Foy next and then be aimed at the Arc.”

Despite his multitude of accomplishments in this sphere, the winner’s prospects of a successful career at stud remains a sticking point for his owner-breeder. “The demand for him commercially isn’t there, as horses who have won just group one over a mile would command more of a stud fee,” Nielsen said. “That’s just the way it is, the trends and the fashion but hopefully it reverts and people will wake up.”

Stradivarius’s dam Private Life (Fr) (Bering {GB}) had no other offerings after him, but her 70,000gns purchase at the 2006 Tattersalls December Mares Sale has reaped rich dividends. Also responsible for the G3 Bavarian Classic and G3 Furstenberg-Rennen scorer Persian Storm (Ger) (Monsun {Ger}) and the group-placed Rembrandt Van Rijn (Ire) (Peintre Celebre), she hails from the family of the G1 Melbourne Cup hero Protectionist (Ger) (Monsun {Ger}) and descends from Pawneese (Ire). Horse of the Year in England and champion 3-year-old filly in France in 1976 courtesy of her triumphs in the G1 King George VI and Queen Elizabeth S. and the G1 Prix de Diane, she is also the ancestress of the brilliant Peintre Celebre. 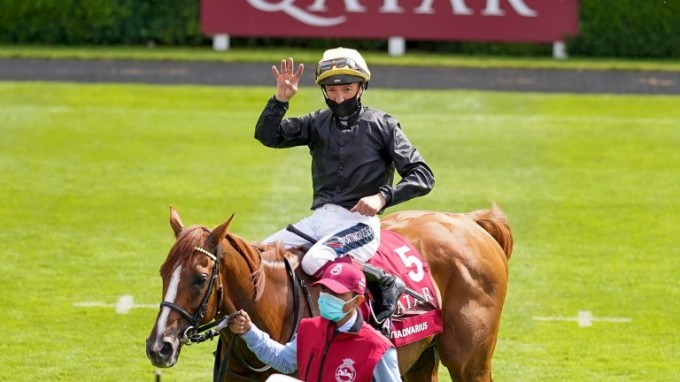 Stradivarius made history by winning his fourth Goodwood Cup in great style under Frankie Dettori, defeating Nayef Road in the clash of staying generations.

Despite having to overcome a number of issues in running, the six-year-old son of Sea The Stars powered home to narrowly see off the Mark Johnston-trained Nayef Road, prompting a trademark flying dismount from Dettori.

It was a fourth victory in the race in as many years for Stradivarius and prompted Betfair to cut him to 14-1 (from 20) for the Arc, with trainer John Gosden confirming the winner will take on stablemate Enable in the prestigious contest.

Dettori opted to drop Stradivarius in and track three-year-old Santiago, his main market rival, with the youngster receiving 15lb from the reigning champion. 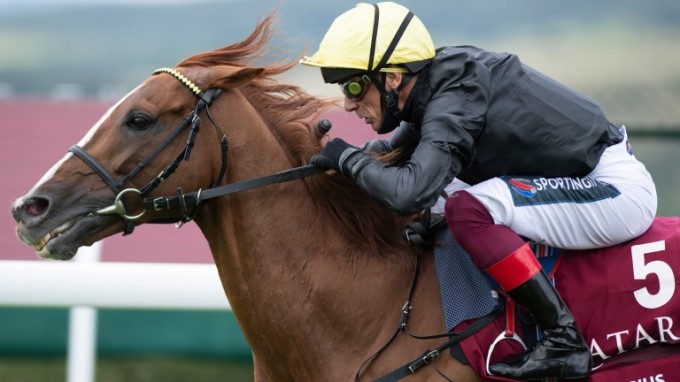 After getting boxed in early in the straight, Dettori finally managed to find a gap and Stradivarius duly responded, powering home to win by a length.

Dettori said: “What a horse. Giving away that weight, everybody rode to beat me and he still gets out and wins. What can you say, he’s an amazing horse.

“What he’s done is break records. To go from a superstar mare like Enable to an absolute champion like this horse in three days is the stuff of dreams.

“I knew I had a good partner and I just had to be patient. When you’ve got a good horse a gap will come. I’ve been in that position before and it’s not nice to be in that position, but he got out and he won.”

Irish Derby winner Santiago, the 15-8 second favourite, travelled strongly into the race but could only finish third, one and a quarter lengths behind Nayef Road.