The Breeders’ Cup Challenge, now in its 14th year, is an international series of stakes races whose winners receive automatic starting positions and fees paid for a corresponding race in the Breeders’ Cup World Championships, which is scheduled to be held this year on Nov. 6-7 at Keeneland Race Course in Lexington, Ky.

One week later, on Aug. 15 at Saratoga, the winner of the 1 ¼-mile Alabama Stakes (G1), for 3-year-old fillies, will earn a free bid into the Longines Breeders’ Cup Distaff. The Alabama will be televised live on NBC as a part of the “Breeders’ Cup Challenge Series Win and You’re In – presented by America’s Best Racing.”

On Aug. 19 in Great Britain, York Racecourse will open its Yorkshire Ebor Festival, which will be home to three Breeders’ Cup Challenge Series races. On the first day of the meet, the 1 ¼-mile Juddmonte International Stakes (G1) will offer Europe’s only free berth into the Longines Breeders’ Cup Classic.  On Aug. 20, fillies and mares will be in spotlight for the 1 ½-mile Darley Yorkshire Oaks (G1), with the winner awarded a free spot in the 1 3/16-mile, $2 million Maker’s Mark Breeders’ Cup Filly & Mare Turf (G1).  A “Win and You’re In” position for the 5 ½-furlong, $1 million Breeders’ Cup Turf Sprint (G1) will be at stake the following day, Aug. 21, in the 5-furlong Coolmore Nunthorpe Stakes (G1).

The month of Challenge Series races will close with two events on Aug. 29: the 1 ½-mile Sword Dancer (G1) at Saratoga for a free berth into the Longines Breeders’ Cup Turf, and the 7-furlong Pat O’Brien Stakes (G2) at Del Mar, which offers an automatic starting position into the 1-mile, $2 million Big Ass Fans Breeders’ Cup Dirt Mile (G1).

As part of the enhanced benefits to horsemen competing in the series, Breeders’ Cup will pay the entry fees and guarantee a starting position in a corresponding Championships race for winners of all Challenge races. The Challenge winner must be nominated to the Breeders’ Cup program by the Championships’ pre-entry deadline of Oct. 26 to receive the rewards, and those rewards must be used in the year they are earned.

Breeders’ Cup also will provide a $10,000 travel allowance for starters within North America that are stabled outside of Kentucky, and a $40,000 travel stipend to the connections of all Championship starters from outside of North 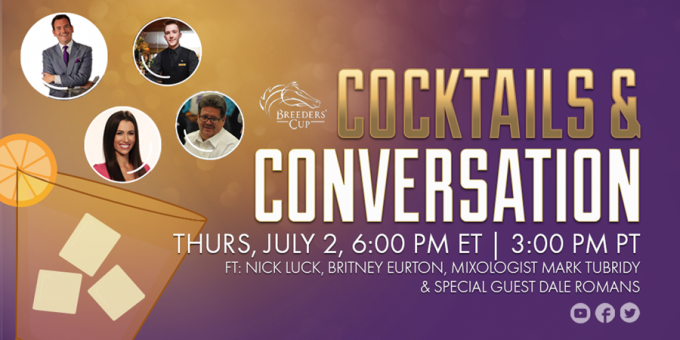 Join us for a sizzling week of Cocktails & Conversation ahead of Saturday’s “Win and You’re In” Runhappy Metropolitan Handicap!

Special Guest Dale Romans will be chatting with Nick Luck and Britney Eurton and Mixologist Mark Tubridy has some festive drinks for the Fourth of July weekend! Gather your ingredients ahead of time to sip & shake along:

Don’t forget you can support horse racing and service industry COVID-19 relief efforts and view past episodes of Cocktails & Conversation you may have missed here.

Tune-in Thursday on the Breeders’ Cup Twitter, YouTube and Facebook pages and be sure to post your questions for a chance to be answered live during the show. Remember to follow the “Win and You’re In” action on social this weekend with the hashtags #WinAndYoureIN and #WAYI!