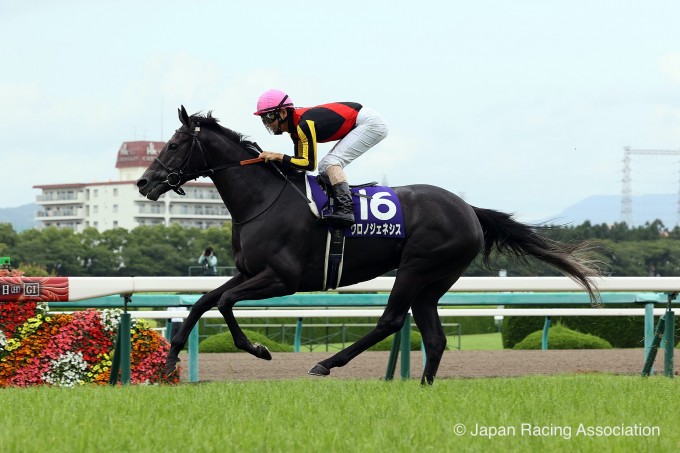 The Breeders’ Cup Challenge is an international series of stakes races whose winners receive automatic starting positions and fees paid into a corresponding race of the Breeders’ Cup World Championships, which is scheduled to be held at Keeneland Race Course in Lexington, Ky., on Nov. 6-7.

As part of the benefits of the Challenge Series, Breeders’ Cup will pay the entry fees for Chrono Genesis to start in the Longines Breeders’ Cup Turf, which will be run at 1 ½ miles over the Keeneland turf course. Breeders’ Cup also will provide a travel allowance of US$40,000 for all starters based outside of North America to compete in the World Championships.

Chrono Genesis, one of the only two female contenders in the race, broke smoothly out of stall 16 and settled around ninth from frontrunner Tosen Surya (JPN). Continuing to take a wide route rounding the last two turns, she advanced strongly to enter the lane in second behind 5-year-old mare Lucky Lilac (JPN), also entered by Sunday Racing.

Once assuming command 300 meters out, Chrono Genesis unleashed a powerful kick despite the somewhat soft going due to rain, leaving the field behind.

“The filly broke smoothly and we were able to travel in good rhythm in good striking position,” said

winning rider Kitamura. “I didn’t really have to urge her to go but she just went spontaneously. She was responding really well so I knew that she will stretch well in the lane. She has become a powerful filly and was in very good condition. She was really strong,”

Tatsue Ishikawa’s 6-year-old Kiseki (JPN) stalked Chrono Genesis from her position in the middle of the field, but could not match her rally and was the runner-up for the second consecutive year. He finished 5 lengths ahead of longshot Mozu Bello (JPN).

U. Carrot Farm’s 5-2 favorite Saturnalia (JPN), the 2019 Japanese 3-year-old Male Champion,  broke smoothly, hugged the rail in 10th and angled out turning the last corner for the attack but was unable to exert his strong late kick due to the soft ground, finishing fourth. He was followed by longshot Meisho Tengen (JPN) in fifth. Lucky Lilac, the nearly 5-1 third choice, could not sustain a drive in the stretch and finished sixth.

Chrono Genesis improved her record to six wins in 11 starts. She won her seasonal debut against open company in the 1 3/8-mile Kyoto Kinen (G2) over a yielding course on Feb. 16 before finishing second to Lucky Lilac in the 1 ¼-mile Osaka Hai (G1) at Hanshin on April 5.

Chrono Genesis becomes the fourth Breeders’ Cup Challenge Series winner in Japan this year. The 6-year-old Mozu Ascot was the first automatic qualifier, winning the February Stakes (G1) at Tokyo Racecourse on Feb. 23, and earned an automatic berth into the $7 million Breeders’ Cup Classic. The 5-year-old mare Almond Eye (JPN) won the Victoria Mile (G1) on May 17 and secured a free starting position into the Maker’s Mark Breeders’ Cup Filly & Mare Turf (G1), and the 4-year-old filly Gran Alegria (JPN) took the Yasuda Kinen (G1) at Tokyo Racecourse on June 7 and a “Win and You’re In” spot for the TVG Breeders’ Cup Mile (G1).