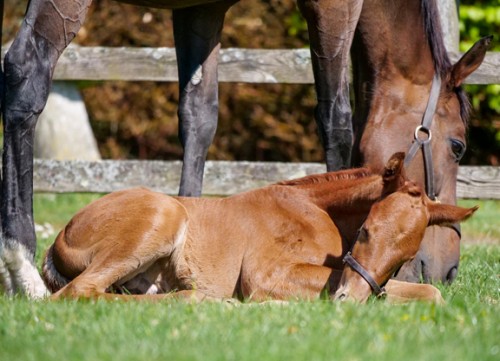 While all about us nothing is quite as it should be, some pleasing normality can be found on stud farms, where the foaling and covering season has continued largely uninterrupted. At Lord and Lady Lloyd Webber’s Watership Down Stud, an eagerly awaited delivery was made this week when Dar Re Mi (GB) (Singspiel {Ire}) produced a colt by her regular partner Dubawi (Ire).

The ninth foal for the treble Group 1 winner is her seventh by Darley’s coveted sire. The youngster is, of course, a full-brother to Too Darn Hot (GB), last year’s Cartier champion 3-year-old, who is currently romping through a book of prized mares at Dalham Hall Stud before boarding a plane for Australia this summer. Traditionally the Lloyd Webbers sell their colts as yearlings and race the fillies. The potency of the Dubawi–Dar Re Mi mating had already been ably expressed through their daughters So Mi Dar (GB) and Lah Ti Dar (GB)CGroup 3 and Group 2 winners, respectively and also Group 1 performers. So when the colt who would become known as Too Darn Hot had “an issue with an X-ray” as a foal, it must have been, from a commercial viewpoint, pretty galling.