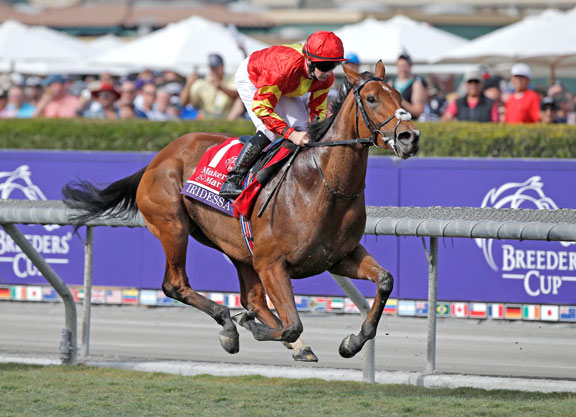 Four-time Group 1 winner Iridessa (Ire) (Ruler of the World {Ire}-Senta’s Dream {GB}, by Danehill) has been retired from racing after injuring a tendon in her box and sold to Japan for a broodmare career. The news was first reported by Racing Post and confirmed to the TDN on Thursday by Bill Dwan, bloodstock manager to owner Chantal Regalado-Gonzalez, upon completion of the deal.

Bred by Annemarie O’Brien’s Whisperview Trading from the first crop of G1 Investec Derby winner Ruler of the World, Iridessa was campaigned by Regalado-Gonzalez with trainer Joseph O’Brien. She bested the future G1 1000 Guineas winner Hermosa (Ire) (Galileo {Ire}) in her fourth start at two, and at three relished the step up to 2000 metres when besting Magic Wand (Ire) (Galileo {Ire}) in the G1 Pretty Polly S. Iridessa dropped back to a mile to once again beat Hermosa in the G1 Matron S. last September, and was back up to 2000 metres at Santa Anita in November when winning the GI Breeders’ Cup Filly & Mare Turf. Iridessa’s dam Senta’s Dream is out of another GI Breeders’ Cup Filly & Mare Turf winner, Bobby Frankel’s Starine (Fr) (Mendocino).

The first big event for the fillies and mares will see Silver Wolf make her 2020 debut on Sunday at Seoul in the Listed Donga Ilbo Cup. In the meantime, the weekend’s racing gets underway with an 11-race card at Busan on Friday which runs from 11:30 to 18:00.

The first on the eleven-race card will see some lightly raced Korean-bred gallopers line up over the short course. (3) NANSAN MUJEOK looks the one to beat as he lines up for his sixth start. The colt sat on speed last start and held off the field with the exception of Linchpin, who looks a handy type. Furthermore, Miracle Wind lined up in the same race and has since gone on and broke maiden status since. (11) BARAM GONGJU comes out of the same race where she finished fourth. She may be forced to settle further back than where she would ideally sit in running, however she can be ridden cold and run through the line strong for Kim Cheol-Ho. (6) STING improved at his second start when lining up in a stronger race taken out by Future King. He looks to sit in the leading division and is capable of collecting some prizemoney in an easier affair. (12) PINEUI KKUM has been consistent, placing at his past two starts. He was stretched out to the 1300m for the first time last start when overcoming a wide draw to sit behind the leaders. He ran through the line one-paced holding off the runs from behind.

Three-year-old maidens here with five of the eleven racing for the very first time. There weren’t high expectations on (9) GOBLIN on his debut following a middling trial, but he ran well for 2nd, racing prominently throughout. Seo Seung-un takes over the mount today, which can only be to his benefit and he won’t need to improve much on that run to win. (1) YEONGGWANGUI EAGLE steps up in trip for the first time following two promising spins around 1000M registering a 3rd and a 5th, the latter in stronger company than this. He’ll be on pace from the start and can go close. The only other one with experience who has hinted at ability is (2) HANHYEOLMA so we will turn to the first-timers for our next bests. (3) ROCK PEGASUS and (5) GLOBAL SEUNGNI both posted competitive trial times and should go well first up.

Twelve maiden gallopers line up in the third where there is a severe lack of early speed engaged. As a result, the speed map looks hard to judge and there is very little confidence with this race. (10) NAMYANG SEUNGNI has shown enough previously to suggest he is an each-way chance. The Chapel Royal colt finished second behind Ultra Pheonix two starts back and then ran on to finish fifth behind Mr. Hansen last time out. With a lack of speed engaged Jung Do-Yun will need to stay in touch to keep his winning chances alive. (2) REINA missed the kick last start before picking up the bit and eventually running on well to finish fifth. She lines up in a much easier event and if she jumps away with them she can finish in the money. (12) B.K. HONEY has improved with each run and is capable of placing after coming out of some much tougher races. (1) THUNDER BAY has finished midfield at his past few and will appreciate an easier assignment.

More three-year-old maidens. (1) HAPPY SECRET tackles the 1300M for the first time following a much-improved 2nd over 1000M on January 10th. She ran on pleasingly and the additional distance can be to her benefit. (3) STRONG MIND comes in having run 3rd in both his first two outings, the latest of which was at this distance on January 17th. Like Happy Secret, he was well beaten by a good winner but ran well and has the potential to improve. So too does (9) PERFECT JEWANG. He’s raced just the once running 5th in a good race at this distance just before the turn of the year. He had previously won a trial and looks nicely in here. Perfect Jewang and Strong Mind will be aiming to get on pace from the gate while Happy Secret is expected to be ridden slightly more patiently. (2) BABEL STAR and (4) VERRA DAY are minor money hopes.

There looks a standout in the fifth where he looks to map on speed and prove too strong to run down. (1) TOP SKY comes off a third placed performance behind Power Train, which was a much stronger event. From the inside draw he should take up the lead and prove too strong for rider Lee Hyo-Sik and trainer Kim Young-Kwan. (11) LATINUIHYANGGI has placed on two occasions from three career starts. She looks to have a maiden win in the near future but she will have to do it from the outside draw in this event. (9) SUPER GALAXY comes out of the same event as Power Train but the margin was significant. She is lightly weighted and looks a place chance at best. (3) CENTER FORWARD finished fourth two stars ago over this distance when running on well. He is one that looks to appreciate a longer journey but lacks early speed. If Francois…  Read more of this post