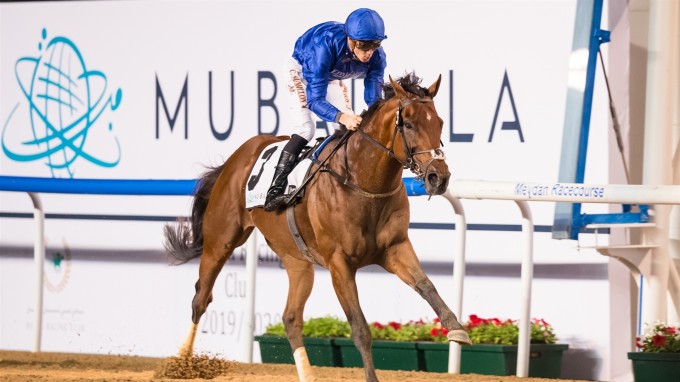 Christophe Soumillon, Jockey, BENBATL (1st)—“He was the best horse in the field by far. For sure, it was the first time on the dirt, but when the horses are really good, they can handle both surfaces. He has good gate speed, which is important for dirt racing. He was cruising the whole way. I was worried on the back straight, because he didn’t change legs properly—I had to force him twice to stay on his right leg. On the last turn, he stayed on his right leg for 200m, so I was little disappointed. Finally, he changed and when I came into the straight, I could feel straight away that he was able to run away and he did quite impressively.”

Saeed bin Suroor, Trainer, BENBATL (1st)—“It’s good to see him really travel well and win that easily. To see the jockey, who rode Thunder Snow to win the last two Dubai World Cups, ride him with confidence and in the last three furlongs he’s still on the bridle shows his class. We have always known he’s a special horse on the turf, but Sheikh Mohammed wanted to run him on the dirt to see how he would run and it was a good decision from the boss. Sometimes you just have to give the horses a chance (on the dirt). Some can handle both surfaces. He handled it well and Christophe kept him handy in the race, which was the plan for him. He won it well, thank God. It was a good decision.”

Antonio Fresu, Jockey, MILITARY LAW (2nd)—“I ride this horse almost every day and I am pretty sure this is a good horse. Since he has come to Mussabeh Al Mheiri’s stables, he has been doing so well and with every gallop he is improving day by day. He is really nice on the dirt. He proved himself in The Entisar Stakes, when he won the Listed race in December. Today he came back after a little break of two months. Nineteen hundred metres is a bit short, as he would prefer ten furlongs. We will see next time.”

Mickael Barzalona, Jockey, GRONKOWSKI (3rd)—“He ran a good race. He’s still not 100% fit yet, so he’s going to improve a lot from this run.” 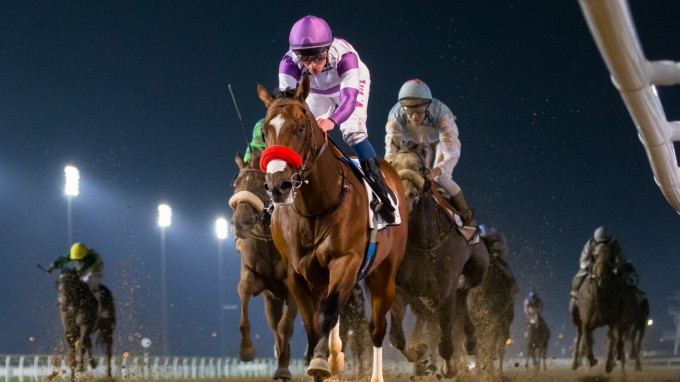 William Buick, Jockey, FORE LEFT (1st)—“Doug O’Neill and his team were very confident that this horse had more speed than any other horse in this race, which he showed, but of course, I had to work hard and it took me a long time to eventually get across. He set good fractions, got a little bit of a breather on the turn and then kicked again. He’s just a very game, honest horse who stuck on very well. He’s got a lot of speed and stayed the mile. I guess they’ll be pointing him to the (1900m $2.5 million) UAE Derby (G2) now, which is another furlong and a half, so we’ll see about that. It was a huge performance from the horse to get where he did, from where he did and in the manner he did. He got there within himself and put himself in a position after three furlongs to control the race, but it took a good horse to do it and that’s what he is.”

Doug O’Neill, Trainer, FORE LEFT (1st)—“That was so cool. I was absolutely going nuts and I’m so happy for Mr. Reddam and for my whole team. I am so proud to be part of a great team with Leandro (Mora, assistant) and Tony Romero and the entire team there and back home in California. What an awesome experience. With the post and the way the race was run with a little bend before the backstretch, he had to work a little extra-hard to get into position, so that was very impressive—but that’s why William is a top jockey. He did exactly what he had to do and didn’t overdo it. He got a little tired late, but probably had a lot to do with what I just mentioned and that he had two months off. This race will do him a world of good. After this, we will see how he comes out. If he’s diving into his feed tub, we may run him one more time (in the $350,000 Al Bastakiya on March 7), but if for any reason he shows fatigue, we’ll wait for the Derby. Dubai has made it so easy for us to relax and enjoy this and I’m a big believer that horses are a reflection of the people around them and this has been a great experience.”

Mickael Barzalona, Jockey, ZABARDAST (2nd)—“We ran him three races in a row and he really surprised me last time, which is why we ran him today. He proved he’s going to be a horse with quality. He got a little keen on the bend, but I’m really pleased with the way he ran. He’s a very good horse for the future.”

Tadhg O’Shea, Jockey, EMBLEM STORM (3rd)—“He ran a very good race and is a very nice horse, only having his second run of his life. He ran a big, big race against tough horses. I think there is better to come, even going further in trip.” 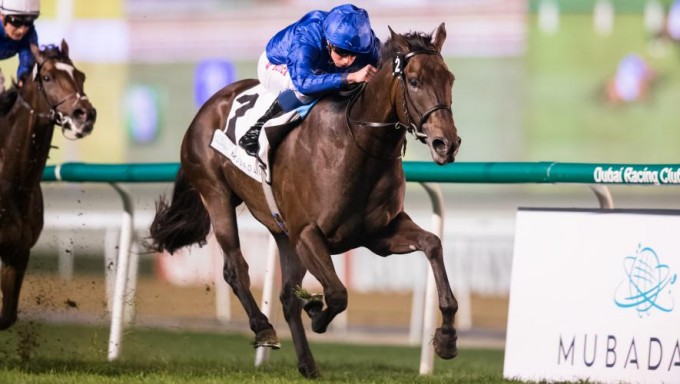 Last year’s Meydan Trophy winner, dropping down a furlong after finishing fifth in the Listed Zabeel Turf on week three of this season’s Carnival, raced in sixth on the inside rail as Royal Marine (Saeed bin Suroor/Christophe Soumillon) set a steady gallop for the 11-strong field.

Art Du Val took closer order entering the straight and ran on strongly between horses to take the lead approaching the final furlong. The Charlie Appleby-trained runner was pushed out by William Buick to see off the late thrust of Red Cactus for a short-head verdict.

William Buick said: “Art Du Val ran very well here the first night. That was over 10 furlongs and coming back to nine furlongs tonight was always going to suit him.

“I was very happy with where I was throughout the race. It was just a question of getting the splits when I needed them, and I got the split at the top of the straight. The second horse came fast and late, but I think Art Du Val might have just got a little lonely out in front.

“He is a horse with a good turn of foot, as he showed there. I had to get him to quicken in a short space of time to get where I needed because they were coming on the outside and he reacted very well. He is a nice horse and hopefully he is going to get back on track now.

“I do not think he is as effective over 10 furlongs. Nine furlongs or even coming back to a mile will suit him.”