Twelve maiden fillies will line up in the first on Busan’s eleven race card. (12) YEONGGWANGUI KISS resumes after seven months away from racing. The lightly raced four-year-old has had just four starts yielding three top five finished including a last start second behind Kahekili. She has been in work since September so she will be fit, You Hyun-Myung trialed her in November and sticks with her for her first-up run which looks a good sign. (4) AMAZING GIRL comes off a last start fourth at her second career start. The Simon Pure filly settled well back before showing a solid turn of foot. Ideally she may be able to sit closer in the run with a good draw. (2) SPICE CANDY was good on debut when third behind Adele Spike. The form lines read well with Adele Spike since winning again in stronger company. (5) HAPPY SECRET ran through the line well last time on debut. She looks one to follow as she is stretched out to a longer journey, but she is still capable of finishing in the money.

A second bunch of maiden fillies go around here, three of the twelve racing for the very first time. (5) THUNDER GO may only have finished 7th of 12 on debut a month ago but the time she recorded and the caliber of opposition that she faced was superior to anything here. Accordingly, she probably won’t need to improve very much off that run to come home on top today. Kim Cheol-ho can put her on speed from the start and she’s the one to beat. The second fastest time in the race belongs to (8) TOP LUCKY, a filly who has shown promise across two starts to date as well as winning a trial. She may want a bit further in terms of distance but should have enough about her to run into some money here. The only one of the field to have a top three finish to her name is (9) DALLAE. She achieved that when 3rd on debut on December 6th. The time wasn’t fast but she did nothing wrong and Seo Seung-un on board today can only be to her benefit. (1) KEUN LUV and (4) SHANGHAI MINT are others with the potential to improve.

The third has a field of inexperienced three-year-olds to line up over the short course. The trial of (8) WONDER BLADE is worth watching as he lines up for his first career start. The Menifee colt ran a good time for his trial on that particular day and there looked to be more in the tank. He finished second behind Doraonpyeongson in the trial, when running through the line in good fashion. (11) YEONGGWANGUI EAGLE debuted last start when finishing third behind First Moccasin in a handy two-year-old event. You Hyun-Myung takes over the riding responsibilities but will have to overcome the outside draw. The now three-year-old is a winning chance and is likely to take improvement out of his debut. (4) DOCTOR GREY posted a good time last start when finishing fifth behind K.B. Boss. The Old Fashioned colt need to improve to be a winning chance but is definitely one to consider in your wider selections. (5) ACE JACKPOT is the most experienced runner in the race with five runs under her belt. She placed last start behind Wild Geranium when getting ran down in the home straight. She has drawn well to sit on speed once again.

Three-year-old maidens and we’re set to have a red-hot favourite here in the shape of (1) MASTER BELLA. She’s finished in 3rd place in both her starts so far beating a couple of these along the way and registering good times in the process. She won’t necessarily lead from the start here but can set up camp just behind the early speed and should be too strong in the later stages of the race. (10) QUEEN GRACE also beat a couple of these on debut – the same pair in fact that Master Bella took down – back in November when finishing a good 2nd. She’s not raced since but the Bart Rice trainee looks nicely in for a good return today. The two horses who both the two favourites have beaten are (3) NORTHERN DREAM and (6) JINJU SARANG. Expect both to be close once more and competing for the places. (8) KING BROTHER debuted over 1300M two weeks ago and while he took an age to get going, he showed a bit of speed late on and this looks the kind of race he can improve in.

Another field of three-year-old colts and fillies line up in the fifth. (11) GREAT GO looks one that can go close after a good performance on debut. The Chapel Royal filly finished fourth in a much stronger race taken out by Golden Winner who has gone on and won since. She lacked early speed in her first start but reeled off one of the faster sectionals in the race. Park Jae-I is likely to let her find her own feet once again with a wide draw. (3) MAN OF THE WORLD lines up for his fourth start coming off a last start second behind K.B. Boss. The colt has drawn ideally to sit on speed once again and take some running down. (5) VERRA DAY has been sent out fancied at his past two starts and hasn’t managed to place. The chestnut will be able to sit just off the speed in this event and run through the line strong. (7) GOOD THUNDER has been unwanted in the market at his two career starts to date. He needs to improve to be considered a winning chance but can collect a cheque.

(1) AMORIS keeps managing to dodge the winner’s circle but enters off a very consistent run having finished 2nd or 3rd in each of her last five attempts. She’s beaten a few of these along the way as well and from the inside gate will be well positioned to run on strongly. She surely gets another top three finish but should she fall short once more, it… Read more of this post

BENBATL MAKES HIS 2020 BOW IN THE SINGSPIEL 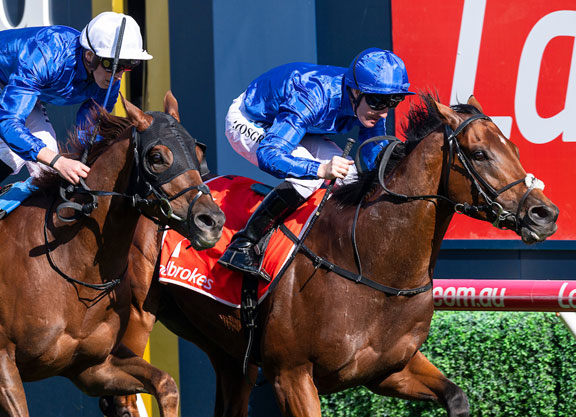 Godolphin Group 1 winners Benbatl (GB) (Dubawi {Ire}) and Dream Castle (GB) (Frankel {GB}) square off in Thursday=s grassy 1800-metre G2 Singspiel S., as the Dubai World Cup Carnival enters its second week. Eight races (seven Thoroughbred) are on tap at Meydan. Bearing the coveted blue cap and with Christophe Soumillon in the irons, the former won the 2018 edition of this contest during a profitable Meydan campaign that season, including the G1 Dubai Turf that March. He also took his show on the road with other Group 1 wins in Munich=s Grosser Dallmayr Preis and Caulfield=s Ladbrokes S. Down Under later that year. A good second to superstar Winx (Aus) (Street Cry {Ire}) in the G1 Cox Plate that October, the bay was shelved until this last September where he claimed the G2 Joel S. at Newmarket and failed to act in heavy ground in the G1 Queen Elizabeth II S. Oct. 19. He carries 130 pounds, tops among the six-horse field and gives five to six pounds to his rivals. Trainer Saeed bin Suroor said on the Godolphin website, ABenbatl has been enjoying a nice winter out in Dubai and is in good form. He didn=t like the heavy ground at Ascot last time outBall his best form has been on a quicker surfaceBbut he has been working well recently. He goes well fresh and this looks a good starting point for him. He is conceding weight to his rivals, but is a class horse and I am hoping for a good result….