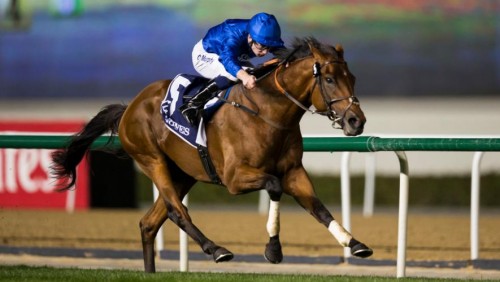 International standard-bearers Benbatl and Dream Castle face each other in a tremendous renewal of the nine-furlong G2 Singspiel Stakes on week two of the Dubai World Cup Carnival at Meydan, UAE, on Thursday, 9 January.

Both Saeed bin Suroor-trained six-year-olds already boast a G1 success over the course and distance, with Benbatl having stormed to victory in the 2018 Dubai Turf and Dream Castle readily winning last season’s Jebel Hatta Sponsored By Emirates Airline.

Benbatl (Christophe Soumillon) went on to post two further G1 wins over 10 furlongs in 2018, in the Caulfield Stakes in Australia and Germany’s Grosser Dallmayr Preis.

The Dubawi entire routed his rivals when scoring by five lengths in the mile G2 Joel Stakes at Newmarket, UK, last September but failed to act on heavy ground in the G1 Queen Elizabeth II Stakes over the same trip at Ascot in October.

Dream Castle (Pat Cosgrave) goes for a repeat victory in the Singspiel Stakes following an impressive display 12 months ago, with the son of Frankel having subsequently won the G2 Al Rashidiya at the 2019 Carnival in addition to his Jebel Hatta success.

He made five starts in Europe and Australia last year, including a close fifth in the G1 Prix d’Ispahan over nine furlongs at Longchamp, France, in May.

Saeed bin Suroor said: “Benbatl has been enjoying a nice winter out in Dubai and is in good form. He didn’t like the heavy ground at Ascot last time out – all his best form has been on a quicker surface – but he has been working well recently.

“He goes well fresh and this looks a good starting point for him. He is conceding weight to his rivals but is a class horse and I am hoping for a good result.

“Dream Castle is in good order too and ran some excellent races at the Carnival last year. I am looking forward to getting his campaign started over a course and distance that suits him well.”

The seven-year-old disappointed on his only previous dirt appearance at Meydan, trailing home last behind the re-opposing North America in the G1 Al Maktoum Challenge R3 Sponsored By Emirates Airline in 2018. He ran several good races on turf at last year’s Carnival, finishing fourth at G3 level in both the Singspiel Stakes and the Dubai Millennium Stakes.

Saeed bin Suroor said: “Team Talk has changed a lot since last year’s Carnival and I hope that he can continue to show what he displays in his work. He is a horse that I like a lot and from what I have seen in the mornings, he could be anything this season.

“He missed the break on his only previous start on dirt, but I am hoping that he can jump well this time and run a much better race.”

Godolphin is well represented in both of this week’s Carnival races restricted to three-year-olds.

First View (Christophe Soumillon), who is unbeaten in two All-Weather appearances in the UK, debut scorer Laser Show (Kevin Stott) and Lost In Time (Pat Cosgrave) all go for Saeed bin Suroor in the UAE 2,000 Guineas Trial over a mile on dirt.

Saeed bin Suroor said: “First View is a nice colt, who is unbeaten in two starts at Kempton Park, and I think he will need further than a mile in time. He has done well out in Dubai and I am hoping for a good result, provided he copes with the dirt.

“Laser Show is improving with every piece of work and he too looks like he will get further. Lost In Time is a solid horse, who always tries very hard. He has worked alongside First View and there is not much between them. “This is a trial, so it is a test for all three horses, and we have to see whether they can go on the surface.”

The duo are joined by Story Of Light (James Doyle) and Silent Wave (Brett Doyle), who are both trained by Charlie Appleby, plus Colour Image (Saeed bin Suroor/Kevin Stott).

Thursday’s mile turf handicap has been split into two races, with unexposed four-year-olds Zakouski (William Buick) and Marhaban (Brett Doyle) both lining up for Charlie Appleby in division one.

Interview and B-Roll with trainer Doug Watson re:

Show all racecards for this meeting on one page   (fonte : RacingPost)