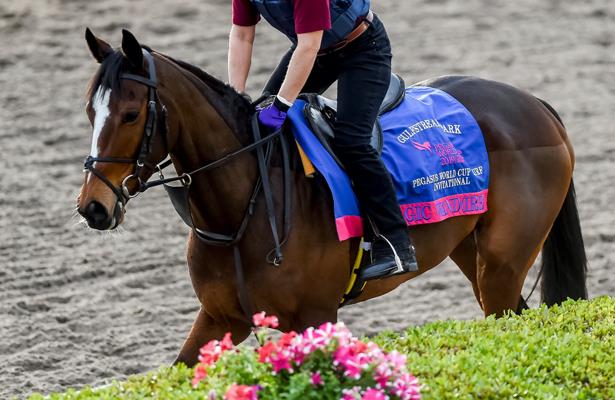 With the retirement of 2019 Pegasus World Cup Turf winner Bricks and Mortar, the second edition of this race lacks a standout American horse to get the hype going — as you’d expect when the likely Horse of the Year departs from a division.

But amid this typical resting period for most European stars, the list of invitees to the Grade 1, $1 million  (G1) contains a single international shipper in Magic Wand, a true iron horse who adds intrigue to the Jan. 25 event.

Magic Wand is an interesting mare and the default leader on the list of invited horses revealed over the weekend. She also deserves recognition for her globe-trotting 2019 schedule.

Despite running 12 times during a globetrotting campaign, she appears bound for the Pegasus. Interestingly, she’s also invited and within the main body of the dirt race if her Coolmore connections choose that as the destination.

Will she show up? Given she is the lone European invited on both the dirt and lists, Pegasus officials likely received reasonable assurances she would ship.

Considering most of Magic Wand’s competition has been strong, and she has competed well, finally breaking through to win a Group 1 event in Australia, the daughter of Galileo looks like a rightful Pegasus Turf favorite.

Aside from Magic Wand, Arklow is another familiar name on the list. While he struggled to eighth in the Breeders’ Cup Turf, he won the Joe Hirsch Turf Classic (G1) two races ago and finished runner-up in the lucrative Kentucky Turf Cup (G3).

Arklow is not a standout turf horse by any means, but based on the invite list, he’s one of the main contenders.

Sadler’s Joy, who is now a 7-year-old horse, only raced four times last season and started his campaign in July, with his first start a troubled sixth-place finish in the Bowling Green Stakes (G2).

After the Bowling Green, Sadler’s Joy finished runner-up in the Sword Dancer Stakes (G1), ran third in the Joe Hirsch Turf Classic and won the Red Smith Handicap (G3). He does not cross the wire first often, but with the right pace and trip, he is always a threat to hit the board against the best.

An invite emerging as a surprising force in the division is United, who ran second at 51-1 in the Breeders’ Cup Turf and backed it up with another second in the Hollywood Turf Cup (G1) a month later. His connections are the familiar trainer Richard Mandella and owner LNJ Foxwoods.

Earlier in the year, United ran third in the John Henry Turf Championship Stakes (G2) and second in the Charles Whittingham Stakes (G2).

Given United is only a 5-year-old gelding, there is still room for him to move forward. If he enters the Pegasus Turf, expect him to contend.

Yet another 5-year-old to watch is Without Parole. This one displayed promise when he won the 2018 St. James’s Palace Stakes (G1) at Royal Ascot for the American breeders John and Tanya Gunther, the father-daughter team behind Justify. After that start, though, his form tailed off. He finished seventh later in the year in the Sussex Stakes (G1), and followed that disappointing run with sixth-place finishes in the Juddmonte International (G1) and Prix de Moulin de Longchamp (G1).

In 2019, Without Parole started off the year no better by finishing fifth in the Dubai Turf, before a last-place finish in the Lockinge Stakes (G1).

But the transfer to America and trained Chad Brown seemed to help, as Without Parole rebounded with a strong third off the bench in the Breeders’ Cup Mile.

If Without Parole could take another step forward in the Pegasus Turf, he is in the mix, though the longer 1 3/16-mile distance is a concern.

Perhaps one of the younger horses will step forward, such as the 4-year-old colt Mo Forza for trainer Peter Miller. Mo Forza is on quite the streak in his past three starts with wins in the Twilight Derby (G2), Hollywood Derby (G1) and Mathis Brothers Mile (G2). After needing six starts to break his maiden, he’s look invincible as of late.

Mo Forza still needs to prove he could travel with the same form, and tackling older horses at the Grade 1 level is not easy. Nevertheless, it is difficult to ignore top Miller horses in good form.

The rest of the main invites includes Channel Cat, Henley’s Joy, Instilled Regard, Next Shares, Starship Jubilee and Zula Alpha.

The “reserve” invitees in order of preference includes Sacred Life, Admission Office, A Thread of Blue, Mr Misunderstood and Lucullan.

Magic Wand lacks a win on U.S. soil, but on paper, this is the spot to pick up an American Grade 1. If she’s not too tired to travel after Hong Kong — and it appears there’s no fatiguing this mare — then it will take a strong effort to defeat her in the Pegasus World Cup Turf.

*Rating is based on HRN fan votes, which rank the Top Active Horses in training.