Authentic a green but decisive winner of the Sham 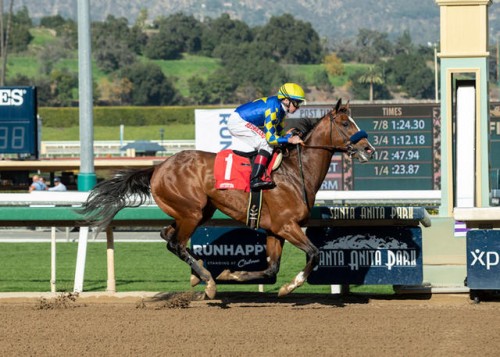 Authentic proved the real deal in Saturday’s $100,500 Sham (G3) at Santa Anita, scoring a convincing victory in the mile Road to the Kentucky Derby series prep for Hall of Fame trainer Bob Baffert.

Making his stakes debut off a 5 1/2-furlong debut win at Del Mar Nov. 9, Authentic stayed off the inside while setting a comfortable pace of :23.87, :47.94, and 1:12.18. Edging clear from his closest pursuers approaching the quarter pole, the bay turned on the afterburners in the stretch while displaying noticeable greenness under Drayden Van Dyke.

“He was a little bit green that day also at Del Mar and I was debating whether to put blinkers on him,” said Baffert, who was winning the Sham for a record sixth time. “He might need something (going forward) to keep a little bit focused.”

Owned by the partnership SF Racing, Starlight Racing, Madaket Stables, Frederick Hertrich III, John Fielding, and Goldconda Stables, Authentic won by 7 3/4 lengths and finished up in 1:37.57 over a fast track, paying $4.40 as the 6-5 favorite.

Bred in Kentucky by Peter Blum Thoroughbreds, Authentic was a $350,000 Keeneland September purchase. He’s by Into Mischief and out of Flawless, by Mr. Greeley, and has now earned $91,200.

The next Road to the Kentucky prep is the Lecomte (G3) at Fair Grounds in New Orleans on Jan. 18. 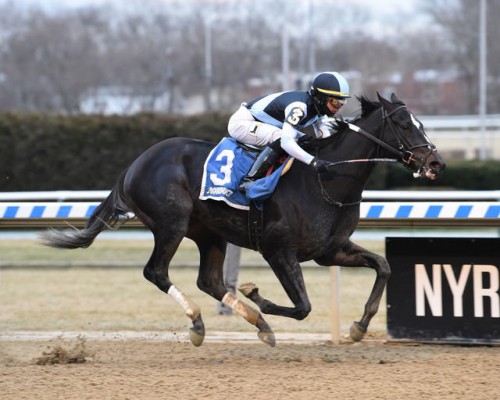 He started a bit on the wrong foot, but Independence Hall gave his many backers a big sigh of relief by otherwise dominating Wednesday’s $150,000 Jerome S. at Aqueduct, the first 2020 Road to the Kentucky Derby series prep of the year for newly-turned 3-year-olds.

Despite breaking last in the field of six, the 1-10 favorite was back in contention before leaving Aqueduct’s backstretch chute, hounded the leader until taking over around the far turn, and was kept to business by jockey Jose Ortiz to win the one-mile test by four lengths in a time of 1:37.27 over a good track.

“He broke a bit slow today because he wasn’t standing the right way,” Ortiz said. “It was a small field and I was able to put him in the clear. I didn’t want to get stuck in behind horses today and try to be a hero. I got the opportunity to ride him like he was the best horse and I did.”

Owned by Eclipse Thoroughbred Partners, Twin Creeks Racing Stables, Kathleen Verratti, and Robert Verratti, Independence Hall paid $2.20. Prince of Pharoahs and Inside Risk finished in a dead heat for second, while Celtic Striker finished more than 15 lengths behind the winner in fourth.

A stakes-record winner over the track-and-distance Nashua (G3) in early November, Independence Hall earned his first 10 Derby qualifying points with the victory. Prince of Pharoahs and Inside Risk earned three points each, splitting the four and two points awarded to the second- and third-place finishers, while Celtic Striker earned one point.

“From the quarter pole to the wire he did very well. He didn’t look like he did last time, but these are a little better horses and I think the track is very tiring today,” Ortiz said.

Independence Hall will now head south for his next Derby prep.

“I’ll talk to the partners but I think the plan will be next week to head down to Tampa and train down there and get out of this weather and get him ready for the next step,” said trainer Mike Trombetta. “It could be the Sam F. Davis ([G3] on February 8), it’s on the radar in five weeks.”

Independence Hall, who is undefeated from three starts with earnings of $210,000, is by Constitution and out of the Cape Town mare Kalahari Cat, who has also reared Spiral (G3) scorer Black Onyx. Costing $100,000 at Keeneland September, Independence Hall was bred in Kentucky by Woodford Thoroughbreds.

Bast vaults to top of Oaks leaderboard in Santa Ynez 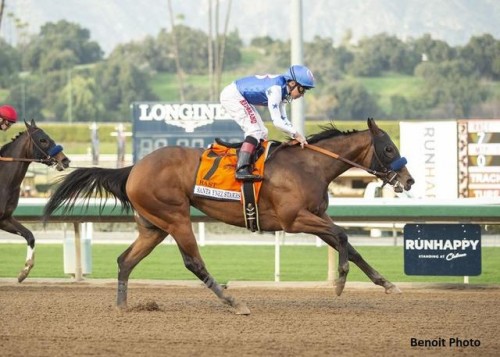 Trained by Hall of Famer Bob Baffert, who also sent out runner-up Auberge and third-placer Golden Principal, Bast added 10 more Oaks points and brought up her total to 34. In the process, she relegated Breeders’ Cup Juvenile Fillies (G1) winner British Idiom to second on the leaderboard with 30 points.

Bast earned her prior points with gritty victories in the Chandelier (G1) and Starlet (G1) as well as a third in the Breeders’ Cup. She’d also broken her maiden over the summer in the Del Mar Debutante (G1), before the Oaks points races began. That resume made her the one to beat here against a short field.

For much of the 7-furlong affair, though, her Baffert stablemates appeared to have the upper hand. Auberge hustled up on the rail to set the pace, pressed by Golden Principal who accosted her turning for home. At the same time, the chasing Bast was under urging from Drayden Van Dyke. The favorite looked slightly flat-footed after running over longer in her past three, while Auberge and Golden Principal were quicker coming off sprint maiden wins.

As Auberge repelled the short-lived bid from Golden Principal, Bast finally began to gain traction. Her stamina kicked in during the last sixteenth, and Bast powered away by 1 3/4 lengths in 1:23.42.

Auberge was 2 1/2 lengths clear in second, scoring 4 Oaks points. Golden Principal rounded out the all-Baffert trifecta in third, good for 2 points. Another 9 1/4 lengths back in fourth came Orquidias Biz, who received 1 point. K P Dreamin and Lovely Lilia trailed, and Paige Anne was scratched. By champion Uncle Mo, Bast commanded $500,000 as a Fasig-Tipton Saratoga yearling. The Baoma Corp. colorbearer has amassed $852,200 from her 6-4-1-1 record.