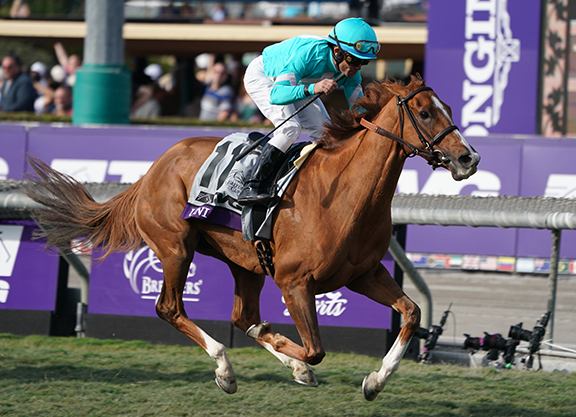 A total of 1038 horses will go through the Deauville ring, including 480 mares, 207 fillies, 335 weanlings and three stallions. The sale has been going from strength to strength in recent times, with this season’s G1 Coronation S. heroine Watch Me (Fr) (Olympic Glory {Ire}) an in utero purchase back in 2015.

Long coveted by breeders, The Aga Khan Studs fields 27 mares and fillies, with G1 Prix de l=Opera winner Shalanaya (Ire) (Lomitas {GB}) (lot 8) one to note. She is also in foal to Almanzor, who has his first foals this year… (fonte : TDN) “Thunder Snow created history by winning the Dubai World Cup twice and provided us with two brilliant results in France, capturing the Criterium International and the Prix Jean Prat,” said bin Suroor. “He ran great races on dirt and turf at some of the world’s top meetings and was a superstar for us.

“He was a class horse, who was very professional and easy to train. He was extremely tough and always tried his hardest in everything he did. He was one of the best horses to ever race for Godolphin and it was a privilege to train him.

“We will all miss him at Godolphin Stables but he retires at the top and we can look forward to seeing his progeny. I am sure that he will become a top stallion over the coming years.”

A winner of the G1 Criterium International at Saint-Cloud as a juvenile, the bay took both the G3 UAE 2000 Guineas and G2 UAE Derby in 2017, and participated in the GI Kentucky Derby that May, but did not finish due to bucking soon after the start. Wheeled back in the G1 Irish 2000 Guineas later that month, he ran second to Churchill (Ire) (Galileo {Ire}), and was third in the G1 St. James’s Palace S. a month later. Back on top in Chantilly’s G1 Prix Jean Prat, he ran with credit to take third in the G1 Prix Jacques Le Marois.

In 2018, he took his first Dubai World Cup, as well as the G2 Al Maktoum Challenge Round 2 and was also runner-up in the G1 Al Maktoum Challenge Round 3, the GI Jockey Club Gold Cup and third in the GI Breeders’ Cup Classic. Brought back as a 5-year-old, Thunder Snow was once again second in the G1 Al Maktoum Challeneg Round 3, but gutted out a nose victory over Gronkowski (Lonhro {Aus}) to take his second Dubai World Cup this March, the first horse to repeat in the race. A fever knocked him out of an intended start in the GI Whitney H. this summer and he was removed from Breeders’ Cup consideration earlier this fall. He retires with a mark of 24-8-7-4 and earnings of $16,511,476.

The rest of the Coolmore roster’s fees were also released, with multiple champion sire Galileo (Ire) once again listed as private, while champion first-season sire No Nay Never, a very narrow second to Kingman (GB) on the second-crop sire list, sees his fee boosted up to €150,000. Proven reverse-shuttler Fastnet Rock (Aus) is at €60,000, while rising young sire Camelot (GB) and MG1SW Caravaggio are both at €40,000.

“We are delighted to welcome three very exciting new horses for the coming season,” said Coolmore Ireland’s Director of Sales David O’Loughlin. “They’re all high-class racehorses, all by proper sires and all at affordable fees. Calyx is the fastest son of Kingman, Magna Grecia is the only British Classic winner by Kingman’s sire Invincible Spirit and Ten Sovereigns is the best son of our own young sire sensation No Nay Never. On the racecourse, Calyx defeated Advertise (GB) (Showcasing {GB}) in the Coventry, Magna Grecia bettered Phoenix of Spain (Ire) (Lope de Vega {Ire}) in the G1 Vertem Futurity at two and King of Change (GB) (Farhh {GB}) in the 2000 Guineas at three while Ten Sovereigns won the Middle Park at two and the July Cup at three defeating Advertise, both in very fast times. They’re three very good-looking horses too, so I think they’ll prove extremely popular.”