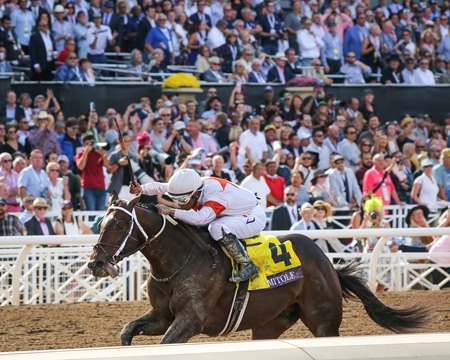 Recording his fourth grade 1 victory of the year Nov. 2, Mitole  stalked the pace and delivered down the lane to catch Shancelot in an exciting renewal of the $2 million Breeders’ Cup Sprint (G1) at Santa Anita Park.

Ricardo Santana Jr. was aboard for trainer Steve Asmussen.

As expected, the quick Shancelot broke on top under Jose Ortiz and wrangled the lead from an aggressive Matera Sky. The opening quarter went in :21.47 as Mitole was just behind those two while well off the rail along with Firenze Fire. Engage also gave chase as they headed to the turn.

On the turn, Shancelot found his best stride and opened on the field as Santana got busy on Mitole, who cut into Shancelot’s lead a little with each stride as he hit the quarter pole in :44.04.

From the back of the back, veteran Whitmore came with a wide move, but it was a two-horse race down the lane. Mitole was on near even terms with Shancelot as they hit the furlong marker in :56.19. Mitole edged away, eventually clearing the runner-up in the final strides.

“I had a lot of confidence in my horse,” Santana said. “He’s a horse I’ve been riding since he was a 2-year-old. I changed my mind today. A lot of people thought he’d go to the lead. I took him back and made one move and got to the wire first.”

The winner, bred in Kentucky by Edward Cox Jr., is out of Indian Miss, by Indian Charlie. The Sprint marked his sixth win from seven starts this year. The wins have piled up in the sport’s top sprint events, and he’s essentially assured the Eclipse Award as the top male sprinter. He might even work his way into the Horse of the Year discussion.

In April, Mitole won the Count Fleet Sprint Handicap (G3) at Oaklawn Park and followed with a 3 1/2-length score in the Churchill Downs Stakes Presented by Twinspires.com (G1) going seven furlongs at Churchill Downs. His signature win came June 8 at Belmont Park when he held off the late run of McKinzie in the Runhappy Metropolitan Handicap (G1).

Mitole came back quickly in the July 27 Alfred G. Vanderbilt Handicap (G1) at Saratoga Race Course and finished a tiring third behind Imperial Hint and Diamond Oops while being pinned down along the inside throughout the six-furlong race. He redeemed himself in spades with a three-length win over Firenze Fire in the Forego Stakes Presented by Encore Boston Harbor (G1) at the Spa on the Travers Day undercard. Mitole has a 10-2-2 mark in 14 starts, all coming at one mile or less.

Asmussen did a masterful job of keeping Mitole in top form all year and came to Santa Anita in advance of the World Championships, getting in five works over the surface, including a bullet :58 4/5 Oct. 22.

“I think that he is so easy to be around. Nothing but class, and the ability he has is just tremendous,” gushed Asmussen after the race. “I don’t know that people realize from where he was in the spring to stretching out to beating the field that he did in the Met Mile, to retract from that and beat the best sprinters in the world and run in the Breeders’ Cup Sprint as opposed to the Mile, that’s twice as much money on his way out. But it’s a very difficult job, one that a horse of his elite abilities is capable of doing.

“When he broke well, I loved it,” Asmussen said. “And Ricardo knows the horse and the confidence he has in him. We talked about just doing whatever was right for Mitole. We have no control over who does anything or where they do it, just be sure you’re happy with him and he’s happy with you, and the rest will take care of itself.”

Jorge Navarro, trainer of the beaten favorite, Shancelot, said: ”No complaints. Look at the horse who beat us. He’s the top sprinter in the nation, probably the world. To be second to him, guess what I have for next year, and by himself. We’re good. I’m very proud of him.

“I feel like a winner. Look who he was running against. He’s had an amazing year for us, and he’ll be by himself next year, so we’re happy about that.”

Mitole will begin his stallion career at Spendthirft Farm near Lexington in 2020.

Cox, with Eaton Sales as agent, sold Mitole to Chestnut Valley Farm for $20,000 at the 2016 Keeneland September Yearling Sale. The Heiligbrodts’ East Hickman Bloodstock purchased Mitole for $140,000 out of the Grassroots Training & Sales consignment at the 2017 Ocala Breeders’ Sales Spring Sale of 2-Year-Olds in Training.

The complexion of the race changed in the morning when it was announced that Imperial Hint, the 4-1 co-second choice on the morning line, was scratched. Raymond Mamone’s Florida-bred 6-year-old developed a blister on his coronet band during the application of glue-on shoes. Trainer Luis Carvajal Jr. said the issue was minor and would not affect the horse’s training going forward.