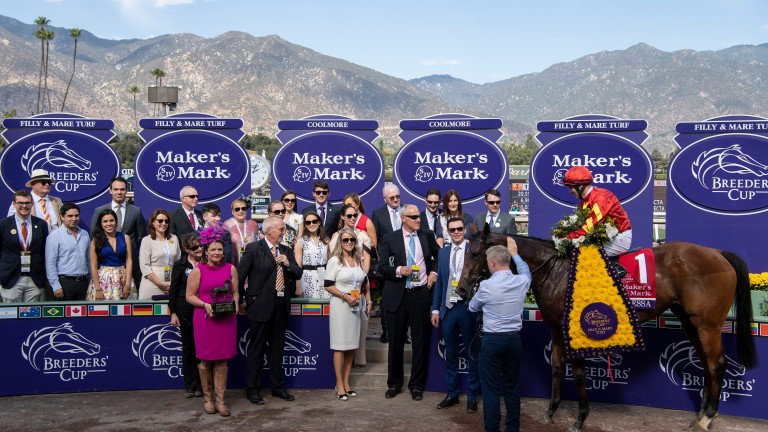 Iridessa became the first European-trained winner at this year’s Breeders’ Cup when running out a game winner of the Filly & Mare Turf, providing trainer Joseph O’Brien with his first success as a trainer at the meeting.

The daughter of Ruler Of The World, who finished third to Billesdon Brook on her last start in the Sun Chariot Stakes, was settled towards the front as Mirth set a blistering tempo.

Turning into the straight, it was clear Iridessa was travelling well and, despite the looming presence of Vasilika, she held on by a neck.

O’Brien, who rode St Nicholas Abbey to victory in the 2011 Breeders’ Cup Turf and in doing so became the youngest ever winning rider at the meeting, said: “I was very happy through the race. She had the pace to get a nice position, it’s not sunk in yet.”

It was also a first success for Ballydoyle stalwart Wayne Lordan, who added: “I’m very grateful to get the opportunities to ride nice horses. Joseph was very happy with her and I was happy with my position throughout. She doesn’t do a whole lot in front, but I knew I had enough left.”

Sistercharlie, sent off the 4-5 favourite, could only finish third ahead of the fast-finishing Fanny Logan and Frankie Dettori in fourth.

Rider John Velazquez commented: “The track is really hard which was a disadvantage for my horse. I was right behind the winner but the way the track is the speed is holding on. She ran well but she didn’t like it.”