The Korea Cup & Sprint are the main events this weekend but the weekend’s racing gets underway at Busan on Friday with a big 12-race card from 11:30 to 18:00. Here are the previews:

(2) AMORIS ran an improved 2nd at this distance last start, running on well and beaten three-lengths by a good winner. He’ll be one of a number on pace here and looks the most likely winner. (10) HANSEN MULGYEOL ran encouragingly for 6th on debut three weeks ago and looks to have potential for improvement here while (6) SHINING EYE also did nothing too wrong on her first outing in July and can also make progress today. (9) BEAUTIFUL KOREA and (12) DALGI are others in the frame.

(4) WORLD SLAM ran a good 3rd last start, coming from off the pace to record a career-best finish. He’ll go back again today and could be the one to beat. He may though leave himself too much to do, in which case (2) MYEONGGA DAERO can be the one to take advantage. He’s never finished any better than 4th but has been knocking on the door of the places for some time and could breakthrough here. He’ll be on pace with (11) BORYEONG HWANHO, another who comes in off the back of a useful 4th on a wet track just two weeks ago. (7) CHARGE POWER and (8) PERFECT BULPAE are others who can aim for the places.

Juvenile maidens with four of the nine having raced before. Among those, (5) CAPTAIN STEALTH is the only one to have raced twice and he’s shown some ability running 4th and 3rd, both at this distance. He can go one better today. (6) YEONGGWANGUI START finished 4th on debut, one place behind Captain Stealth on August 3rd and he could be the main danger here. (2) HANBIT TAEYANG was 5th in the same race and he too can improve. (7) CENTUM BEONGAE weakened on his first start three weeks ago but the came off the back of a good trial and he can be given another chance here. Among the first-timers, (8) ECHO WHITE looks the pick.

More juvenile maidens. (8) FIRST STAR ran a good 2nd on debut on August 3rd. In the process, he beat three of those we saw in race 3 so that race could serve as a good indication of his prospects here. (5) DAEJI JARANG was an improved 2nd on what was his second start on August 16th, running on well and he’s likely to be the main danger. Among the debut-makers, (2) BANJIUI MAGIC was the fastest in trials, while both (3) RAON YEOGEOL and (4) FUTURE KING also put in useful performances. As ever, watch the market for clues with the newcomers.

(2) NEW QUEEN may be a maiden, but she has finished no worse than 4th in any of her latest eight outings. She should maintain that record today and she may even start as favourite but of course, it is possible that she will probably find one or two too quick. (6) HAPPY AGAIN is up in class having registered her maiden win at the fourth attempt with a three-lengths score over this distance on August 18th. She’ll join New Queen on pace early and could win again. (5) SERENDIPITER is a thirty-two-race maiden but has proven capable of finding the money against this kind of company. (3) JIGURYEOK PALPAL and (9) TITLE CODE are others who can go close.

(5) ROYAL TICKET beat four of these on his way to 2nd place at class and distance on August 4th. He led pretty much the whole way around but got caught late on and had to settle for his third runner-up finish in eight starts. He may not lead early today but looks the pick here. (6) ONNURI GANGJA was sent off favourite that day, which is some going for what was a fifty-five-race maiden. He’s still a maiden having finished 4th on that race and then 3rd when re-appearing two weeks ago. He’s a consistent money winner and should at least place again here. (4) TWO TWO CAPTAIN struggled a little on his first try at this class three weeks ago but has won at this distance before and can be considered. (3) URANUS J and the up in class (10) MARK ONE are others who look capable.

(11) TOHAM STAR has run 2nd in both his starts at this class following a maiden win on a wet track back in June. Both times he’s run to form, being beaten by good winners and today should be his day. (4) MABEOP CHEOREOM ran a really good class and distance 2nd last start on August 18th. That was her third runner-up finish and she looks to be the biggest danger here. (1) LOVE LETTER had a poor day at the office last time but was going well prior to that and can be given another chance here. (2) VIP KING and (8) THUNDER STRUCK are others who were a bit below par on their respective latest appearances but who can be better today.

(1) WONDERFUL LION ran a good 3rd behind the excellent Mr. Afleet at class and distance on August 3rd. She’s two starts into a comeback following seven months out and was 2nd on her return. She’s led both times, can do the same today and this time can win. (9) SEONGSAN POWER comes in following a good 2nd at class and distance three weeks ago and can be a danger here while (5) WONDERFUL TALE is up in class following an all the way win over this distance in a fast time a month ago and has every chance of following up. (7) WONDERFUL STORY returns from a six-month layoff and looked sharp when winning a trial two weeks ago. (8) TIME SPEC another who can go well on his day and who should be in at least the placing hunt. It should be a wonderful race.

There is one first-time starter among the eight who go here, and he could well be the winner. (6) KING OF BOSS is a four-year-old, who first started to trial eighteen months ago. He finally makes it to the track having successfully come through a good trial three weeks ago and he could well be worth the weight. He faces plenty of experience, including (1) SMILE FACTOR, a winner over 1200M last time out and a likely pace-setter here. (4) RETURN OF SUBSIDY returns for the first time since March and looked competent enough in a recent trial while (7) FINE TRUMPET is much better than his latest start – in much tougher company than this – suggests. (2) YEONGUNG ILGI is another who can go well.

(3) SANGSEUNG POWER is up in class following a good win over 1300M on August 18th. That win had been coming and he seems on an upward trajectory that could see him to another victory here. (5) KING LION beat a couple of these on his way to 3rd place over 1000M a month ago. That was first-up following seven months out and he can continue to make progress today. (6) QUICK MOVE and (7) BUGYEONG STORY are both slightly better than recent form would suggest sand they can begin to turn things around here. (10) DAEHO JILJU similarly hasn’t found it easy in two starts at this level so far but can get better today.

(10) SEOBU CAT has finished no worse than 2nd in seven starts so far, with three of them ending in the winner’s circle. He was runner-up on his latest outing when odds-on favourite on his first try at both class and distance, leading until late on. This time he should be in front again and should stay there. (1) CAPTAIN GUY looks to be the principle threat dropping back in trip after a slid 3rd over 1800M last time and very capable at this level. (4) CHEONNYEONUI GANG was an improved 4th last start and can continue to improve here while (2) U S MAN and (6) QUEEN OF CAPTAIN, the latter up in class, are others who can figure.

(10) RED CLOUD beat Seobu Cat, who we saw in race 11, at this distance last month to get promoted to this class. He comes in here under a nice light weight as the form horse and he could win again. It won’t be easy though. (2) A PURE GOOD MAN is a class and distance winner and while he has slightly underperformed when carrying significant weight in his latest two, he still has plenty of quality. (3) ROCK HARD SEVEN too has been a little indifferent of late but has plenty of scope to return to form. (1) DARMA ran a good 4th last time out and can aim for a repeat while (4) YEONGCHEON DERBY looks best of the rest. 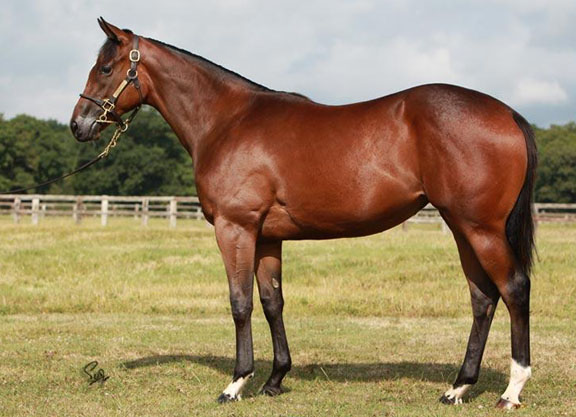 by Emma Berry
There has been a good run of recordstumbling since the start of the European yearling sales season and the trend continued at the Osarus Yearling Sale at La Teste de Buch, where a filly by Myboycharlie (Ire) set a new high for the sale when selling for i170,000. Conisgned by Haras de Montaigu, lot 270 has been the recipient of update after update this season courtesy of her half-sister Soffia (GB) (Kyllachy {GB}), who has progressed from listed success to victory in the G3 Ballyogan S. and then the G2 Sapphire S. Her next target for trainer Eddie Lynam and owner Lady O’Reilly will be the G1 Derrinstown Stud Flying Five during the Longines Irish Champions Weeekend. The daughter of the listed-placed Rime A Rien (GB) (Amadeus Wolf {GB}) was bought by Nicolas de Watrigant for a new partnership which will include Haras de Montaigu and she will go into training with Frederic Rossi. The filly was one of three six-figure lots acrossthe two days, with Tuesday’s Bated Breath (GB) filly being joined by the top-priced colt of the sale from the first crop of Shalaa (Ire) (lot 211). Offered by Yann Creff, the half-brother to listed winner Mambomiss (Fr) (Mastercraftsman {Ire}) was another on the list of Mandore International’s purchases, this time in partnership with AGV Karwin, at i100,000.
http://www.thoroughbreddailynews.com/pdf/tdn/tdn190905e.pdf