The Ballydoyle maestro has won the Irish Classic on 12 occasions, but only once in the last four years has he triumphed.

Galileo, High Chaparral, Camelot and Australia all followed up their Epsom wins by landing the Curragh event and Anthony Van Dyck will be the seventh O’Brien-trained colt to attempt the feat. Of his Epsom winners, only Ruler Of The World and Wings Of Eagles failed to follow up.

Ryan Moore’s eight Irish Classic wins do not include an Irish Derby and he takes over from Seamie Heffernan, who rode Anthony Van Dyck at Epsom, as he bids for a full house.

O’Brien said: “Everything has been good with Anthony Van Dyck since Epsom. We haven’t done a whole lot with him since the Derby but what he has done, he’s done well. He’s going there in good form.”

Donnacha O’Brien, successful for his brother Joseph on Latrobe in this race a year ago, is going for back-to-back wins as he continues his association with Broome.

The pair won the Derrinstown Stud Derby Trial at Leopardstown last month, before finishing fourth in the Investec Derby three weeks ago. 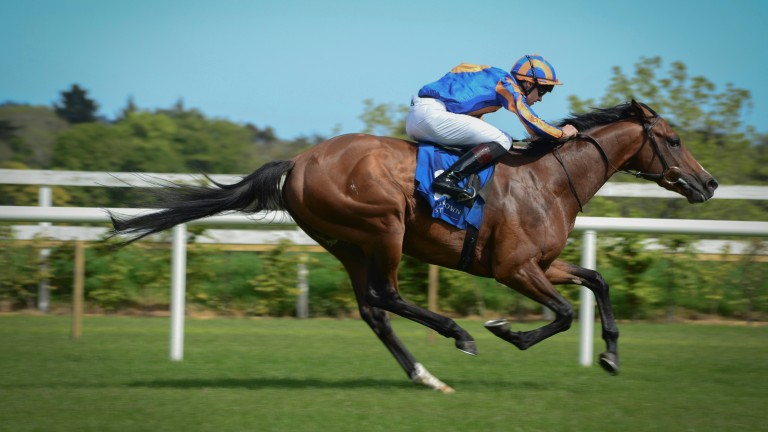 Broome was beaten only half a length at Epsom and will be attempting to reverse placings with stablemate Anthony Van Dyck and Madhmoon, who finished first and second respectively.

Aidan O’Brien said: “Broome ran very well at Epsom and came out of the race in good shape. The Curragh track will suit him – it suits most horses really well. He’s a very consistent colt and is in good form.”

All but two of Aidan O’Brien’s 12 winners of the race (Desert King, his first, in 1997 and Cape Blanco in 2010) ran in the Derby prior to landing the Irish version and six of them, who failed at Epsom, went on to win the Curragh prize.

Norway and Sovereign both ran at Epsom three weeks ago, finishing eighth and tenth respectively, and O’Brien said of their chances: “Norway is in good form. He was disappointing in the Queen’s Vase last time but he’s better than he ran there and, hopefully, he’ll show it.

“Sovereign is a straightforward horse who usually races prominently.”

Completing the Ballydoyle team is Il Paradiso, who was declared for the race at the request of part-owner John Magnier to bring the number of runners to eight, meaning there would be three places on offer for those betting each-way.

O’Brien said: “Il Paradiso won his maiden over the distance at Leopardstown. He’s in good form and while this will be a big step up for him, he gets the trip well.”

Madhmoon set to bring the house down with victory

Victory for Madhmoon would prove a hugely popular result with the colt’s trainer Kevin Prendergast, who will be 87 on Friday, seeking a first win in the race to bring his tally of Irish Classic wins to nine.

Prendergast, Ireland’s senior trainer, first got on the Classic scoreboard in 1972 when Pidget won the Irish 1,000 Guineas and he has won another 1,000 Guineas, the 2,000 Guineas (twice) and the St Leger on four occasions since.

Madhmoon represents his best chance of adding the Derby to his score in a race which his father, the legendary Paddy Prendergast, won four times.

Beaten half a length by Anthony Van Dyck at Epsom three weeks ago, Madhmoon is owned by Sheikh Hamdan Al Maktoum, whose colours were carried to victory by Salsabil in 1990.

Prendergast said of Chris Hayes’s mount: “Madhmoon is in super form. I couldn’t be happier with him.

“He might have been a bit unlucky at Epsom, where he stumbled coming down the hill and grabbed hold of the bridle a bit earlier than we wanted. However, he got the trip well and he just might come out on top this time with a bit of luck.”

Cons Yet to win this season from three attempts

Rakan going under the radar for Weld

Dermot Weld has sent out three winners of the Irish Derby, run across the road from his Rosewell House stables on the Curragh.

Zagreb, who won in 1996, was followed by Grey Swallow in 2004 and Harzand, who completed the Epsom-Curragh Derby double in 2016.

Rakan, winner of two of his four starts and in the same ownership as Madhmoon, carries his hopes this time.

Weld said: “Rakan is in good form and the form of his Listed win at Leopardstown got a boost at Ascot last week. He’s a progressive colt and while it is a strong renewal with the Epsom principals again involved I expect him to run a good race.”

Jim Bolger and Kevin Manning landed the prize with Trading Leather in 2013 and Manning believes Guaranteed, who won the Listed Silver Stakes at this course earlier this month, will appreciate the step up to 1m4f.

Manning said: “Trading Leather won the Silver Stakes before winning the Irish Derby. Stepping up to 1m4f suited him well and I think Guaranteed will appreciate the extra two furlongs as well. He’s in good form and, hopefully, will run well.” (fonte : RacingPost)