Sweating notably before the off, Churchill (Ire) (Galileo {Ire}) nevertheless stayed cool enough on the track to deliver as the 6-4 favourite and gain a record eighth G1 Qipco 2000 Guineas for Aidan O’Brien. As he had when successful in the G1 Dewhurst S. here in October, the imposing bay tracked the pace closely travelling strongly and when sent to the front with a quarter mile remaining pulled out just enough to prevail by a length from Barney Roy (GB) (Excelebration {Ire}), with a neck back to Al Wukair (Ire) (Dream Ahead) in third as the field finished in a bunch. “We were worried as it was his first time back and he’s a big horse who we knew would come on a good bit,” O’Brien said. Ryan Moore added, “He’s such a lovely horse and is never going to be ultra-impressive, but there is so much power there and he has a magnificent mind. He has everything you want in a racehorse and is the most beautiful horse to sit on.”

Straightforward For Galileo’s Seventh Heaven In the Jockey Club This already below-par renewal was diminished by the withdrawal of the Stoute representative Across the Stars (Ire) (Sea the Stars {Ire}), which left last year’s G1 Irish and Yorkshire Oaks heroine Seventh Heaven firmly in pole position. Having beaten the Oaks runner-up Architecture (Ire) (Zoffany {Ire}) further than Minding (Ire) (Galileo {Ire}) had when successful in the Curragh Classic in July, the imposing bay went on to inflict a 2 3/4-length defeat on stable star Found (Ire) (Galileo {Ire}) in the York fillies’s feature in August. Meeting traffic when fifth in Ascot’s G1 Qipco British Champions Fillies & Mares S. on her next start, she was fourth in the GI Breeders’ Cup Filly & Mare Turf at Santa Anita in November and was back on international duty when second in the G1 Dubai Sheema Classic at Meydan Mar. 25.

Always happy anchored in a share of third by Ryan Moore as Pinzolo set off in isolation, Seventh Heaven was ridden to take over from that rival with a quarter mile to race and gradually stretched clear to stamp herself in a different class to One Foot In Heaven. “She felt fantastic today and is a better filly than last year,” her rider said. “She’s done remarkably well from three to four and this nice big galloping track and quick ground are very important to her. It was all very smooth.” Aidan O’Brien added, “She’s a lovely mare who is progressing all the time and loves good ground. Physically, she is doing well and came here today with one eye on the [G1] Coronation Cup [at Epsom June 2]. We thought this might work for her. She has a big high cruise and when you drop her down she takes a bit of time to get into gear.”

The dam La Traviata, who was the winner of the GIII Victory Ride S., produced the 2011 G1 Middle Park S. hero Crusade for this stable and also Cristoforo Colombo (Henrythenavigator), who was third in the G2 Coventry S. and runner-up in the G2 Railway S. before slipping up and unseating during the G1 Phoenix S. Also related to the MGSW Jack Sullivan (Belong to Me), the dam who descends from a half to the GI Secretariat S. and GI Rothmans International S.-winning Southjet (Northjet {Ire}) also has a 2-year-old full-brother to Seventh Heaven. Due to her seven-pound extra burden for winning the G1 Prix de l’Abbaye, Marsha was fully eight pounds worse off with Washington DC for a 3/4-of-a-length beating of that rival in the Chantilly sprint on Arc day but the result was ultimately the same in a show of sheer sprinting class on the Rowley Mile. Evidence of her prowess was first available in Scotland last June, when she dominated the Listed Land O’Burns Fillies’ S. over this trip at Ayr and she was able to follow up in the Listed City Walls S. at York in early July. Only fifth but beaten less than a length in the G3 King George S. at Glorious Goodwood late that month, the bay was three-lengths second to Just Glamorous (Ire) (Arcano {Ire}) in Chantilly’s G3 Prix du Petit Couvert in September prior to returning to that track and trip for her finest hour in the Abbaye.

Clive Cox withdrew last year’s winner Profitable (Ire) (Invincible Spirit {Ire}) which may have made this task a touch easier, but few would argue that Marsha would not have prevailed either way such was the manner of her performance. Held up early towards the rear by Luke Morris off the furious tempo set by Just Glamorous, the homebred was delivered stand’s side as the leaders paid for their exertions and she rushed to the front approaching the furlong pole. Despite veering right late on, she was able to hold Ballydoyle’s race-fit favourite and confirm her progression as the June 20 G1 King’s Stand S. approaches. “I thought it would be very tough for her today and [trainer] Sir Mark [Prescott] told me that the last horse to win this with that penalty was Lochsong,” her rider commented. “The team at home have got her spot-on today and she feels like she has really filled out. When I pushed the button, she was electric and I got there too soon as she got tired up the hill.”

Sir Mark Prescott tends to excel with stayers, but he handled the five-furlong specialist Pivotal (GB) during his racing career before he became a leading sire and has handled several fast two-year-olds. “I thought she was very good when she won at Ayr and that was the beginning–she just improved and improved from there,” the master of Heath House Stables commented. “She beat them again on seven-pound worse terms here, so she’s done very well and mathematically she’s close to being a sprinting star, but she’s got to keep going. Stayers are my stock-in-trade I suppose, but I like the sprinters when they come along and Pivotal wasn’t too bad!”

Marsha’s dam, who was a listed winner in France as a juvenile, hails from a family which is the stuff of dreams for any syndicate but particularly for the Elite Racing Club which had fairly modest pretensions at the outset. That all changed when Soviet Song (Ire) (Marju {Ire}) emerged just after the turn of the century and beat future star and Churchill’s second dam Airwave (GB) (Air Express {Ire}) on debut at Kempton prior to collecting five group 1 successes including the Sussex. Her dam Kalinka is also the second dam of the G1 Prix Jean Romanet and G2 Blandford S. heroine Ribbons (GB) (Manduro {Ger}) and the G3 Pinnacle S. winner Miss Marjurie (Ire), also by Soviet Song’s sire Marju. Marlinka also has a 2-year-old colt by Cape Cross (Ire) named Magistrate (Ire) and a yearling filly by Iffraaj (GB).

Barney Roy produced an excellent performance to finish second in the first British Classic, the G1 2000 Guineas, over the straight mile at Newmarket on Saturday, May 6.

The Richard Hannon-trained colt, making only his third start, broke well but raced freely early on under James Doyle before settling better in seventh of the 10 runners after a furlong and a half.

He took closer order approaching the three-furlong marker and stayed on well to go third just inside the final furlong, despite becoming unbalanced entering the Newmarket dip.

Barney Roy rallied gamely on the rising ground, running on to take second and resisting the challenge of the third Al Wukair, to go down by a length to last season’s champion juvenile Churchill, who scored in 1m 36.61s on good to firm ground.

A neck separated Barney Roy and Al Wukair at the line, with a head back to Lancaster Bomber, and another Godolphin runner, Dream Castle (Saeed bin Suroor/Silvestre De Sousa), who met trouble in running, a further length and three-quarters in arrears in fifth.

John Ferguson, Chief Executive & Racing Manager of Godolphin, commented: “I am delighted with the way Barney Roy has run. He was only having the third race of his life and has performed exceptionally well.

“Sheikh Mohammed’s first reaction was that he is probably a horse for the St James’s Palace Stakes (G1, 1m, June 20) at Royal Ascot.

“The thing to remember is this was his second run this year. He has had two quick runs and three in total and has performed like a top-class racehorse, so there is lots to look forward to.”

Richard Hannon said: “I am very proud of Barney Roy. He ran a good race, but he stumbled coming into the dip, mainly through a little inexperience.

“He has run a super race and we are very pleased with him. I think it is fair to say the winner had the run of the race.

“The St James’s Palace Stakes at Royal Ascot is likely to be on the cards for him now.”

James Doyle added: “Barney Roy has ran a stormer and I am absolutely delighted with him.

“Everything went against us – we were hoping for a better pace. They didn’t go very quick at all and we didn’t have a lot of room for the first furlong and he raced awkwardly, not used to being in the middle of other horses. Once the pace lifted, he was fine.

“He got the hang of it by halfway, but we were caught in a tangle of horses. He faltered coming into the dip, which he did not handle at all.

“Once he met the rising ground, he finished off really well. I thought I was closing with every stride. I think a flatter track will definitely suit him better. “

Churchill sweeps to Guineas success for O’Brien and Moore 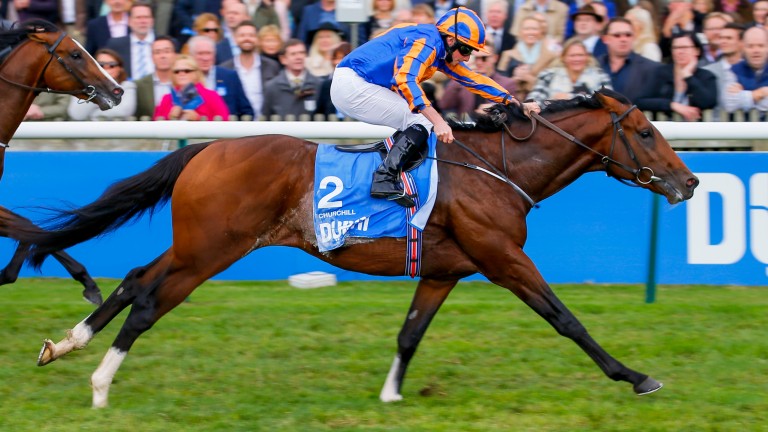 Churchill delivered an eighth Qipco 2,000 Guineas win for Aidan O’Brien as the 6-4 favourite prevailed under Ryan Moore from Barney Roy and Al Wukair.

Moore positioned himself just off the early pace on Churchill and, while other rivals drifted into the centre of the track to mount a challenge, he shot up the rail and took a lead entering the Dip that he never looked like giving up.

The final winning margin was a length, with a neck separating Barney Roy from Al Wukair. Even so, neither got the serene passage of the well-placed winner which promises plenty for the rematches that will hopefully follow.

Moore said: “He’s such a lovely horse, he’s never going to be ultra impressive but you feel he has so much power there and he has a magnificent mind. He’s got everything you want in a racehorse, he travels, he has lots of speed, he’s got class and he’s the most beautiful horse you’ll ever see.”

He added of the race: “He was always very comfortable and I was there a bit early, it always feels every time you ask him there’s a bit more.”

Bookies were quick to cut Churchill for the next natural steps in his career, which now reads six wins from seven starts. He is now 8-13 with Betway for the Irish 2,000 Guineas and 6-4 (from 3-1) with Sky Bet for the St James’s Palace at Royal Ascot. 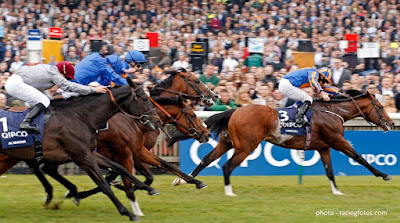 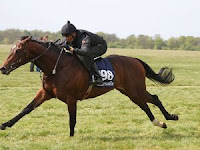